Liberal righteousness is a road to nowhere. Bloomberg and the Koch brothers have same contempt for working people 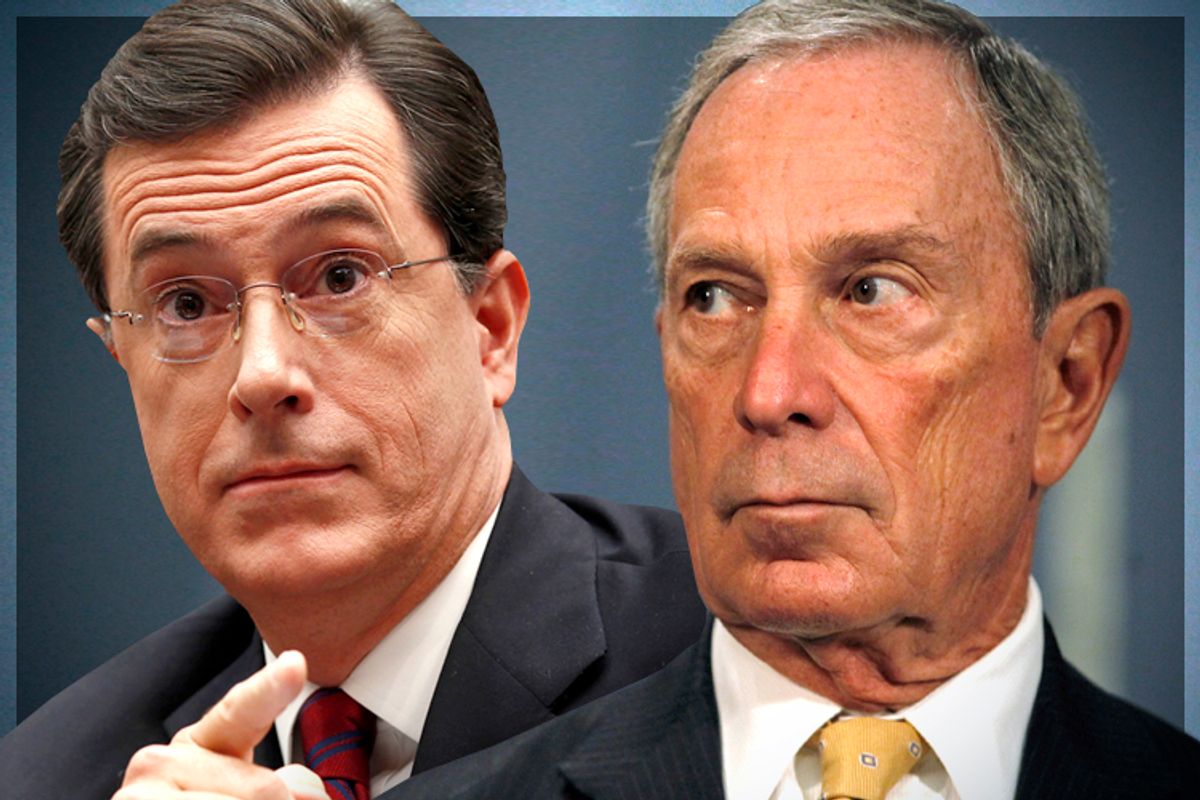 Liberals rejoice. The former mayor of New York City, megabillionaire Michael Bloomberg, recently announced to the New York Times that he will spend some $50 million dollars on an effort to confront the National Rifle Association and advance background-check legislation for gun buyers. I’m a strong supporter of gun control, so hooray, I guess.

What made the story worth noting was when the paper asked Bloomberg, one of the wealthiest men in the world, how much he planned to spend on the matter:

...he tossed the $50 million figure out as if he were describing the tip he left on a restaurant check.

“I put $50 million this year, last year into coal, $53 million into oceans,” he said with a shrug, describing his clean energy and sustainable fishing initiatives.

This sounds remarkably nonchalant, even indifferent. The reader naturally wonders what motivates a man who has dumped so many millions over the years with so little concern about results.

Thankfully, Bloomberg gives the answer a few paragraphs later. It seems he has been moved of late to contemplate mortality, and his political deeds—including, I suppose, his push for school “reform” and his wars on soda pop and cigarettes—are all undertaken with this problem in mind.

“I am telling you if there is a God, when I get to heaven I’m not stopping to be interviewed. I am heading straight in. I have earned my place in heaven. It’s not even close.”

It’s Pascal’s Wager updated for the age of Citizens United. If God exists, Bloomberg naturally wants to be prepared, and so he has put his money on the most glaringly virtuous politics available. He will advertise his goodness not as lesser men do—with hemp tote bags and locally made condiments and yoga in public places—but by overwhelming force of political spending, just as he did when persuading the people of New York City to give him a third term as mayor. His victory there in 2009 was probably a little too narrow for his taste, but this time around it will not even be close. He will spend more. He will be sure he gets premier status with this airline. And when the time comes he will flash his platinum card at the attendant with “St. Peter” on his nametag, and he will proceed directly to enjoy the rewards of a lifetime collecting righteousness miles.

The Times hints that Bloomberg may have meant his theological remark as a joke, but even so it reminds us of something about the patrician strain of reform he represents­--that we have seen politicians like Bloomberg before. During the nineteenth century, a long string of saintly aristocrats fought to reform the state and also to adjust the habits and culture of working-class people. These two causes were the distinctive obsessions of the wealthy liberals of the day: government must be purified, and working people must learn to behave. They had to be coerced into giving up bad habits. They had to learn the ways of thrift and hard work. There had to be sin taxes. Temperance. Maybe even prohibition.

On the single greatest issue of the time, however, these sanctimonious reformers were of no use at all. They were in favor of clean government, to be sure, but when it came to organized money’s war on the world, which was then bringing impoverishment and industrial combat and dislocations of every description, they were indistinguishable from the most stalwart conservatives. Describing the patrician “Mugwump type,” the historian Richard Hofstadter writes,

[T]he most serious abuses of the unfolding economic order of the Gilded Age he either resolutely ignored or accepted complacently as an inevitable result of the struggle for existence or the improvidence and laziness of the masses. As a rule, he was dogmatically committed to the prevailing theoretical economics of laissez faire. . . . He imagined that most of the economic ills that were remediable at all could be remedied by free trade, just as he believed that the essence of government lay in honest dealing by honest and competent men.

If that description hits uncomfortably close to home, well, good. We’ve returned to the Gilded Age, laissez-faire is common sense again, and Victorian levels of inequality are back. The single greatest issue of then is the single greatest issue of now, and once again people like Bloomberg—a modern-day Mugwump if ever there was one—have nothing useful to say about it, other than to remind us when it’s time to bow before the mighty. Oh, Bloomberg could be relentless in his mayoral days in his quest for sin taxes, for random police authority, for campaigns against sugary soda and trans fats. But put a “living wage” proposal on his desk, and he would denounce it as a Soviet-style interference in private affairs.

During the Occupy Wall Street protests, he declared that we should stop criticizing investment banks; it would cost us jobs: “If you want jobs you have to assist companies and give them confidence to go and hire people.” Later on, when confronted with a successor who didn’t share his views, he graduated to straight-up trickle-down: “The way to help those who are less fortunate is, number one, to attract more very fortunate people.” Only by helping the rich, and helping them more, and then helping them even more, can we ever hope to do something for the poor.

And consider the enlightened views of the nation’s other neo-Mugwumps as they address us from the charitable foundations, the NPR airwaves, or the city hall of the burg you live in. Listen to their endless plans for reforming education, for example, by which they always seem to mean either that we must unleash market forces in the schools or that students must make themselves more desirable to employers by studying one of the STEM fields. We get rules and more tests, the entrepreneurs get freedom. And I have yet to hear of a liberal billionaire who feels doubts about “free trade” with, well, anyplace.

To say that there is no solidarity in this form of liberalism is to state the obvious. This is not about standing with you, it is about disciplining you: moving you out of the desirable neighborhoods, stopping and frisking you, prodding you to study the right things. Or, at its very noblest, it is about enlisting you in some fake “grassroots” effort whose primary purpose is to demonstrate the supreme moral virtue of the neo-Mugwump who’s funding the thing—to foam the runway for him as he makes his final approach to Heaven International Airport.

In this new political world, it often feels as though we non-billionaires have been reduced to spectators. Between the Koch brothers of the right and the neo-Mugwumps of the center, we seem to have no choice anymore.  Yes, the final decision on Election Day is still up to us, same as it is on "American Idol," but the spectacle itself is arranged by exalted people who are as distant from us as Zeus was from the ancient Greeks.

And yet. Every now and then something comes up to remind us that there are ways to make our will felt even without the help of some heaven-minded billionaire. For example, it feels appropriate to note that there was recently a strike by some 2,000 workers at Johns Hopkins Hospital in Baltimore, a world-famous establishment that happens to be attached to the university from which Michael Bloomberg graduated and to which Bloomberg has reportedly donated more money than any living alum has given to any university, anywhere.

The strike was a tactical affair that lasted only three days (I originally heard about it because a friend of mine is an organizer working with the hospital employees’ union), and it is far too early to predict how the matter will turn out. Still, the situation it was meant to publicize reminds one of the situation in Michael Bloomberg’s New York: Wages for certain classes of workers that are allegedly so low that many of them must rely on food stamps, a top executive who earned compensation amounting to more than $3 million dollars in 2012, and in the background, a controversial public-private gentrification scheme that is transforming the surrounding neighborhood.

Now, maybe this whole thing is wrong-headed. Maybe those striking workers are the kind of people who drink Big Gulps, and maybe the only way to help them is by helping their employer, or by somehow making Baltimore attractive to the wealthy. But I can’t help but suspect that the Bloombergs of the world have the whole thing upside down. That the way to improve a place—or to get folks to eat better food—actually starts with proper pay for the people who live there. And that this antiquated form of organizing, in which the disenfranchised come together to help one another, is the only truly promising way to avoid the disasters of the last Gilded Age.