In tonight's episode, the black actress plays a token. But she knew exactly what she was doing 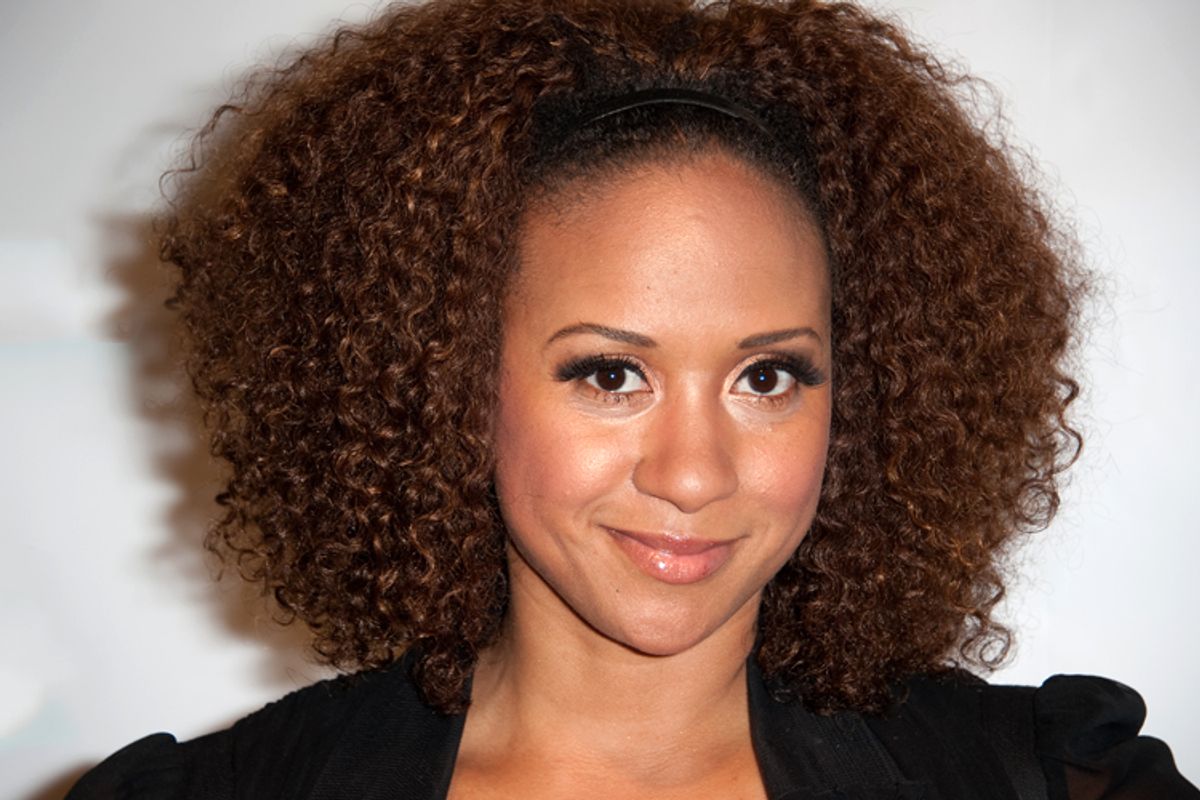 On tonight’s “Veep,” Vice President Selina Meyer gears up to tell the world that she’s running for president. To that end, her team tries to assemble a living tableau of special yet “normal,” everyday Americans to stand behind Meyer as she makes her announcement. The episode, titled “Alicia,” features the wonderful stage and screen actress Tracie Thoms as one of the chosen: a working mother who’s been walking the streets, posting fliers and trying in vain to get the government to pass legislation in favor of universal childcare. Alicia comes to the speech rehearsal with her best friend and adorable daughter, believing she will finally have a chance to be heard by someone in power. She soon realizes that no one in the veep’s office listens – not even to each other. Thoms talked to Salon about playing the common man, code switching, and steering clear of stereotypes.

How did you get the part of “Alicia”?

I went in and auditioned. We had the script, but a lot of it was improv. Julia (Louis-Dreyfus) was there and Armando Iannucci, the creator, and they just kind of talked me through what they were trying to do. I had a little bit of an advantage because I’m from Baltimore and I went to Howard University in D.C. So I know the area and the people there really well from personal experience. So, I just tried to be as honest as I could about the people who live there. And they bought it.

Do you watch “Veep”?

I haven’t watched every episode. I’ll catch it here and there. It’s so smart and so funny. So I was really excited about it and terrified.

Terrified. A) it’s like one of the best comedies on television. And B) it appeared that so much of it relied on improv skills. And improv is not where my strengths traditionally lie. Luckily, at Juilliard, in grad school, we did some improv in class. And, I did a Web series that was largely improv a few years ago. But there are some people that are really good at it. And, everyone at “Veep” is at the top of his or her game. But what I didn’t realize is that, while it appears improv’d, it’s actually not. It’s actually scripted. So, that took some of the onus off of it. But everybody is so smart, and so funny, and so fast.

Do you know whether the character of Alicia was written specifically for an African-American woman? And, if so, why do you think so?

I think what they really wanted to do with this episode is show how the community around the White House and the vice president’s office feels about them, and what they do. Because it can be quite a bubble on that show. You’re seeing everything from the inside. They hadn’t really had an episode where it was the outside looking in.

Plus, they really wanted to play with the idea of the quote-unquote normal. Now that Selina (Dreyfus) is running for president, [the mandate is] "Get us some normal. Show us that she’s in touch with the people, the salt of the earth. We understand the plight of the people of America." Alicia thinks she’s very special. She doesn’t realize until she gets there that there are many normals. She has to deal with whether she’s just being used as a pawn, or [whether] the vice president does actually care about her cause. Alicia is all about her platform. She’s a neighborhood activist. Her platform is assisted childcare to get people less dependent on government. In order to do that, they have to go to work. In order to do that, they have to place their kids somewhere.

That's one of the most clever things about the episode: Alicia actually has to deal with a microcosmic version of that plight. When she arrives, her daughter is literally handed off to different characters on the show.

Exactly, she’s like, ‘"Well, I have to get my girl Dee here to help me take care of my kid. This is what I do every day, shuffling a child around."

I don’t know how the character of Alicia’s friend Dee was written, but I feel like she plays a little bit more into recognizable stereotypes.

It was definitely a collaboration between the creators and me and Edwina Findley, who plays Dee. So many of us want to shy away from playing those kinds of quote-unquote stereotypical characters. But then, when you go to Anacostia – Edwina is also from D.C. – there is a truth to some of the colloquialisms and the speech inflections. To refuse to play those people means to refuse to acknowledge that they exist. And they do exist. You don’t mess with those women because they will slice you. There are some women out there like that.

It’s definitely a negotiation but I don’t think having the contrast was a mistake. The creators were very open to suggestions. If we were to say, "We wouldn’t say that, that’s not how this would go. This is a term we don’t use at all," they changed it – right up until we rolled camera. The writers would come over and they listened and they would change the line right there on the spot.

I thought it was interesting seeing your character, Edwina’s character and “Veep” cast member Sufe Bradshaw – three black women playing characters with very different temperaments – simultaneously during a half-hour comedy program. It’s not something you see that often.

Within our community, we talk a lot about coding – like how we speak to each other versus how we speak to people outside of our community. We do this code-switching thing, but you rarely see it portrayed on TV. Like, if I speak to someone in the White House, I’m going to talk to them in a certain way. Then when I go back and talk to Dee, I’ll speak to her the way that we speak in our neighborhood. I tried to play with that on purpose. It’s a fine line because, if it’s inconsistent, it can read [to the audience] as, "Her accent went away. What is she doing?" But in reality, that’s how we operate many times.

There was a lot of discussion about that. I don’t think Dee code-switches as much. She does a little bit when she tells the vice president that she follows her on Twitter. We just tried to play with all the layers of who we are as black women in society and how we have to be chameleons sometimes in order to get what we need and go where we need to go.

It’s funny because Sufe’s character doesn’t switch it up at all. She’s straight at all times. There’s one moment where I even try to get her to switch it up, like, "You’re going to talk to me for real." And, she’s like, "I don’t know what you’re talking about. Here’s your sticker and go away."

It seems like the character of Sue has long ago adapted to that world. By the end, you and Dee have also sort of adapted, at least a little. Every character on that show is a bit corrupt and cynical, and you get to that place fast.

It’s like I have to give a little to get a lot. That’s how this works. Alicia’s smart. She learns by watching everyone.

Do you have any indication of whether Alicia might return?

When I auditioned for it, [the part was listed as] "possible recurring." I think it might depend on how she is received by people. If audiences like her, she may come back.

I’m surprised to hear you say that this role was out of your comfort zone. I’ve seen you in such a wide variety of roles, in films from “Rent” to “Death Proof” to “I Will Follow” – not to mention live theater and TV parts.

It’s really weird. I usually play, like, lawyers, detectives – you know, more educated, strong black women. There could be many reasons for that. This was interesting, to play someone a little more blue-collar – but still smart. I don’t get the opportunity to do this that often. The improv comedy aspect of it was the thing that was most out of my comfort zone.

Alicia was a blast. She’s my homegirl. That’s where I’m from. I rarely get the chance to play in that space. People just don’t see me that way, for some reason. It was fun to explore the complexities that are inherent in people who come from those communities because people make blanket statements about them; "Oh, they’re just stupid” or "Oh, they’re just hood," or "Oh, they’re just ghetto," and that makes me want to scream at people. "Have you met my family? They’re from Poplar Grove Street in Baltimore, Maryland, where, you know, you have to be really smart."

It’s really important that we tell more stories about the complexities of our people. We don’t have to only be Obama or “Precious.” There’s a lot in between.