On "Mad Men," Dawn and Shirley are stealing the show 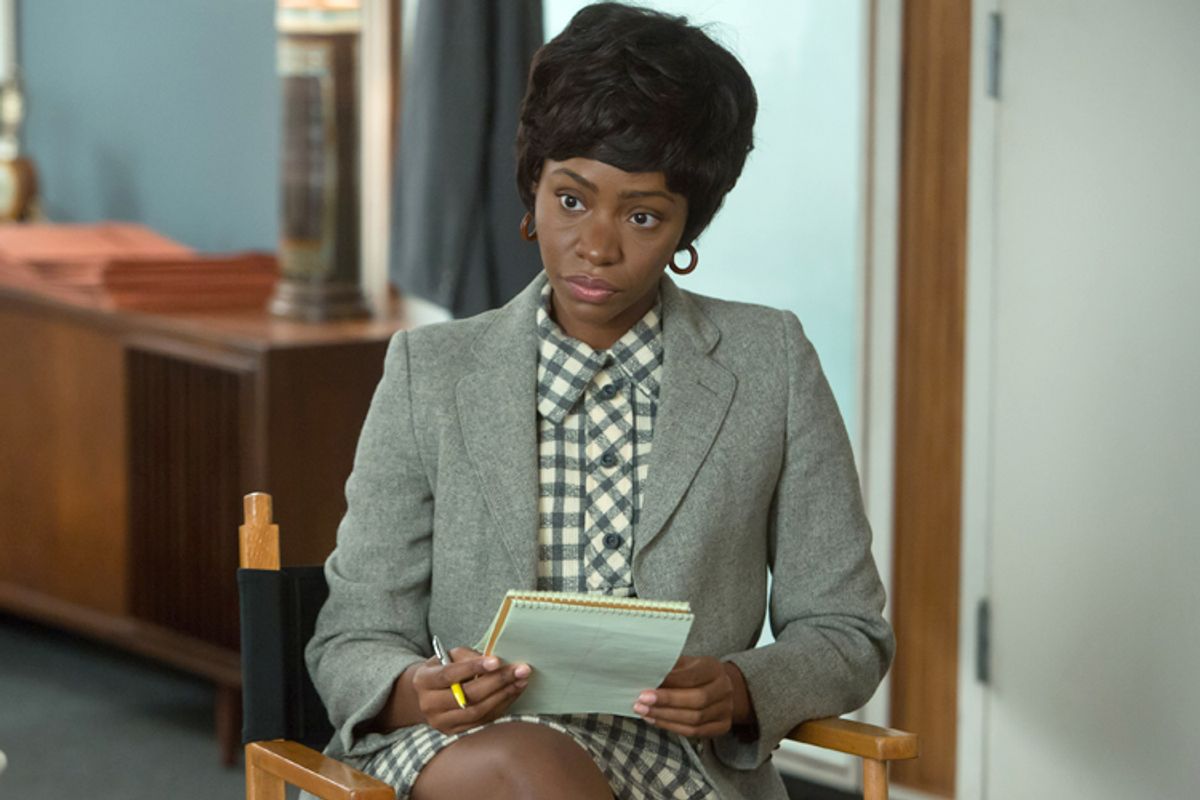 Last night’s episode contained many great moments, but I just wanted to point out a subtle exchange that will likely go down in “Mad Men” history as one of the show’s most brilliant.

The episode was all about invisibility – or visibility, as it turns out. At long last, Sterling, Cooper, Draper Pryce’s black characters were brought to the forefront, if only to underscore how often and easily they are overlooked. Peggy’s “girl,” Shirley (Sola Bamis), becomes the recipient of all the adwoman’s loneliness, simply because she has a thoughtful and sensitive fiancé. Dawn (Teyonah Parris) catches hell from Lou Avery over slaving for two masters – in addition to answering his phone and fetching his whatever, she’s still working for Don, her sort-of-namesake who, like her, is there, but not really there.

Watching Dawn speak her mind and her subsequent, inadvertent ascendancy was terribly satisfying – and, I dare say, unexpected. There was even something appealing about watching Peggy embarrass herself in front of the office and try to pin it on Shirley -- though it benefited Shirley none at all. The most delightful and telling moment of the episode had to be the way in which these black women greeted each other in the break room, early into the day’s humiliations:

Dawn and Shirley could not possibly be more different in this scene – the former is conservatively dressed and permed. The latter rocks a natural afro and bright red, nearly NSFW minidress. But by calling each other by the other’s name, the two women poke fun at how interchangeable they are in the eyes of their white colleagues and employers. Sure enough, the two are soon being shuffled around like black pawns until Cutler (Harry Hamlin) gives Joan – another employee of greater, but still arbitrary status – leave to break the cycle.

“Mad Men” takes its time in almost all things, but this episode, “A Day’s Work,” is the particularly long-awaited fulfillment of a scantily articulated arc that began way back in Season 1 with the introduction of the show’s virtually unseen black servant class. Remember “The Hobo Code,” when the unnamed janitor watched Peggy and Pete in the midst of their fateful tryst? At the time, the self-absorbed white characters failed to remember he was even in the building, and – like the elevator operator Hollis – he chose to keep his mouth shut and remain in the shadows. Last night, when it came down to a matter of self-respect, Dawn made a different choice. That's got to be progress.