Scalia’s recusal dilemma: Is he conflicted on antiabortion “sidewalk counselors”?

Given his family associations with crisis pregnancy centers, some say the justice should refrain from related cases 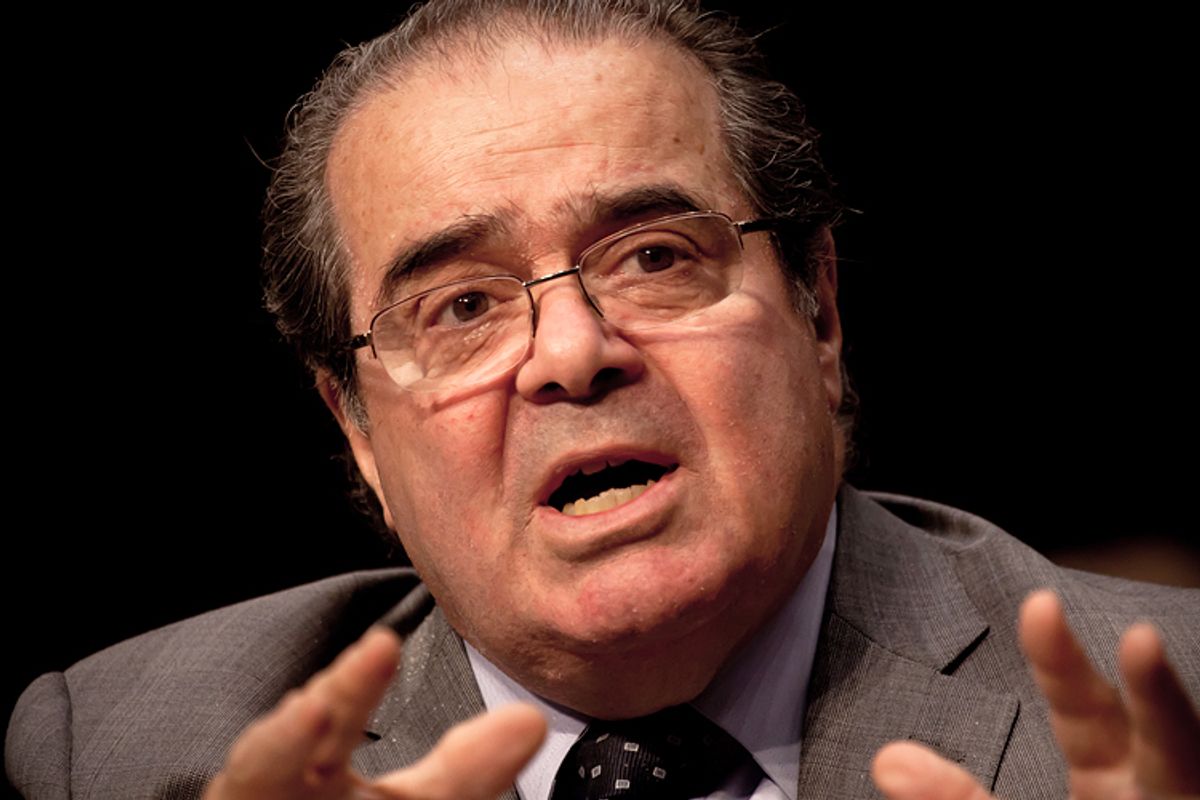 We cannot reasonably expect that Supreme Court justices will not have political leanings or personal ties to political organizations and figures. They are human beings, after all. But at what point do such associations compromise their ability to impartially rule on a case? Is it possible that Justice Antonin Scalia has passed that threshold in a recent Supreme Court case?

In January, the Supreme Court heard oral arguments in McCullen v. Coakley, a case challenging a Massachusetts law that imposes a 35-foot buffer zone at all abortion clinics in the state. Leading the charge against this case is activist Eleanor McCullen, 77, who has emphasized that she and other “sidewalk counselors” use quiet conversation to dissuade women out of entering the abortion clinic and going through with the procedure.

During the oral arguments, Justice Antonin Scalia, a well-known opponent of abortion rights, made it clear that he didn’t see those like McCullen as “protesters,” but rather as counselors whose goal was “to comfort these women.” He hinted that it infringed on the right of the “counselors” to talk women out of having an abortion.

The Supreme Court will deliver its ruling in June of this year, but the outlook doesn’t look good for the Massachusetts law.

While it is clear from these statements that Justice Scalia will likely rule against the Massachusetts buffer zone law, what isn’t clear is whether he should have been able to hear the case in the first place.

Justice Scalia’s wife, Maureen Scalia, is a “Pro-Life Advocate” who, until last Monday afternoon, was listed on its website as a board member of the Nurturing Network, a crisis pregnancy organization. In an email to Salon, Ann Granger, director of communication for the Nurturing Network, stated that Maureen Scalia is a past board member of TNN, but no longer on its board. Granger also stated that she would let the webmaster know to update this information. Soon after, Maureen Scalia vanished from TNN's current Board of Directors page (though this cache of the page on April 7, 2014, shows her listed on the website). Her TNN profile page is still live, as well.

According to the most recent 990 tax forms available through Guide Star, Maureen Scalia was a board member of the Nurturing Network as recently as 2011 fiscal year. The Nurturing Network is an organization that assists women facing an unwanted pregnancy, but it does not include abortion care as an option. Its client brochure is rife with emotionally manipulative language like “Something inside you wanted to choose life.” It also frames abortion as a form of intimidation: “Too often, abortion is the only choice suggested to someone in your situation.” The Nurturing Network is explicitly antiabortion, as are Crisis Pregnancy Centers on the whole.

Crisis pregnancy centers are clinics run by abortion opponents who try to persuade women to forgo abortion. They are known for resorting to lies and misinformation about abortion and even birth control in order to scare women out of those options. They are often unregulated and unlicensed, and usually located near abortion clinics, which may serve to confuse abortion patients about where they are going.

According to its website prior to being updated on Monday afternoon, Maureen Scalia is a board member of the Nurturing Network as well as a “Crisis Pregnancy Counselor” at Hope in Northern Virginia, a crisis pregnancy center located in Falls Church, Va.

When asked if Maureen Scalia is currently a counselor with Hope in Northern Virginia, a spokesperson for the CPC told Salon, “I can neither confirm nor deny that.”

If Maureen Scalia does indeed work with Hope in Northern Virginia, it is also unclear whether she is a counselor solely inside the crisis pregnancy center or if she is what they sometimes call a “sidewalk counselor,” which are CPC affiliates who stand outside of abortion clinics and try to persuade patients not to enter the clinic but to instead come to the CPC.

According to legal ethics pioneer professor Monroe Freedman, absolutely. He points to the Federal Judicial Disqualification statute, 28 USC 455(a), which applies to all federal judges, including Supreme Court justices.

“In Scalia’s case, there are two problems that are recognized in the literature,” he emphasized. If Maureen Scalia is a paid employee of the CPC Hope in Northern Virginia, then her antiabortion work contributes to her and her husband’s family income, which could be a violation of article 455(b)(iii) of the Federal Judicial Disqualification statute. This article requires that the justice recuse himself if his spouse “is known by the judge to have an interest that could be substantially affected by the outcome of the proceeding."

Freedman also notes the potential conflict of ex parte communication, which are conversations that violate due process because they could unfairly allow one party to influence a decision maker, between Maureen Scalia and her husband. He emphasized that it’s not necessary that a reasonable person actually know that ex parte communications are taking place, but simply that a reasonable person could reasonably question whether such communications take place between the Scalias at all.

But professor James Sample, who focuses on judicial recusal, doesn’t agree. “As a general threshold matter, I think we want justices who are not so insulated from the real-world that they lack human perspective in deciding cases, but that we also need to be wary of genuine conflicts of interest,” he wrote in an email to Salon.

Of course, this is not a question reserved exclusively for justices on the right. Justice Ruth Bader Ginsburg, an advocate for reproductive rights and gender equality, came under fire from conservatives, for her activities related to the issue. Before her judicial career began, Justice Ginsburg was a co-founder of the Women’s Rights Project at the ACLU, an organization that brings litigation before the Supreme Court fairly frequently, and she has close ties to the feminist organization the National Organization for Women. She was pointedly criticized, by conservatives and some legal ethicists, for appearing at a lecture series sponsored by the NOW Legal Defense and Education Fund just 15 days after voting in favor of an opinion that challenged a state’s duty to provide medical screening for low-income children, an opinion that was consistent with the NOW legal defense fund amicus.

In his consideration of the Scalia matter, Sample urged the importance of transparency. “My basic take on this scenario that you describe is that Justice Scalia need not recuse,” he wrote, “but that he -- and we -- would be well served by an explanation of his decision not to recuse (or to recuse) similar to the way in which he explained his thinking vis-à-vis his contacts with Vice President Cheney.” We've yet to hear such an explanation.