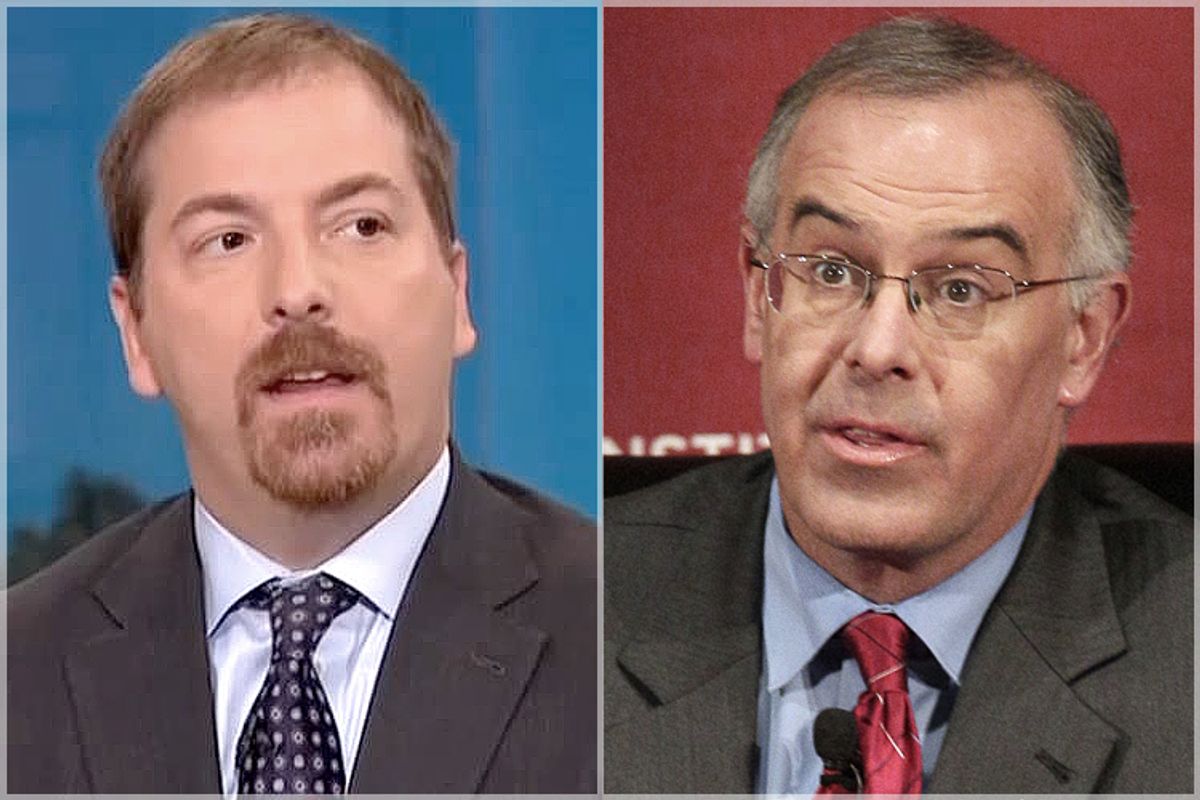 This just in: New York Times columnist David Brooks and NBC's Chuck Todd want you to know that President Obama has “a manhood problem” — or at least the appearance of one. That's the conclusion the two white men reached on "Meet the Press" on Sunday (transcript), following comments by another white man, Sen. Bob Corker, R-Tenn., the ranking Republican on the Senate Foreign Relations Committee. Corker warned, “I think we’re going to lose eastern Ukraine,” which would be “a geopolitical disaster,” resulting from “an era of permissiveness the U.S. has created around the world.”

But that perception doesn't only belong to Republicans. No, it was international, Brooks claimed:

Basically since Yalta we’ve had an assumption that borders are basically going to be borders and once that comes into question if in Ukraine or in Crimea or anywhere else, then all over the world all bets are off. And let’s face it, Obama, whether deservedly or not, does have a — I’ll say it crudely — but a manhood problem in the Middle East. (editor's note: the bolding is ours) Is he tough enough to stand up to somebody like Assad or somebody like Putin? I think a lot of the rap is unfair but certainly in the Middle East there is an assumption that he’s not tough enough.

And Todd asserted that the Obama administration itself shared this perception:

By the way, internally, they fear this. You know, it's not just Bob Corker saying it, okay, questioning whether the president is being alpha male. That's essentially what he's saying: He's not alpha dog enough. His rhetoric isn't tough enough. They agree with the policy decisions that they're making. Nobody is saying-- but it is sort of the rhetoric. Internally this is a question.

Of course, Todd provided no sourcing for this claim. He wouldn't be an insider if he didn't depend on sources he can't name. It's such a manly way to do politics, sniping from the shadows.

There's so much BS involved here, one hardly knows where to start. Because it can cloud out everything else, it's best to hold back the black masculinity aspect, and start with foreign policy facts. First off, as Steve Benen noted at Maddowblog, the assumption Obama is “not tough enough” flies in the face of “overwhelming evidence to the contrary,” even using Brooks-approved standards:

If you knew literally nothing about the last five years, you might hear this chatter about “manhood” and “alpha males” and assume that President Obama was a pacifist, reluctant to use military force under any circumstances. But given what we know about what actually happened over the last five years, the scuttlebutt is just bizarre.

What Obama actually is — Surprise! Surprise! — is a foreign policy realist, which is to say he belongs to the sober mainstream of U.S. foreign policy thinking since World War II. The realists stand in stark contrast to the neocons, along with their deluded sidekicks, the liberal hawks. As Stephen Walt explained last week in Foreign Policy, realists have often come off as doves, because war is almost always a bad idea from a levelheaded realist perspective, particularly for a superpower as dominant as the U.S. has been since 1945.

“For realists, international politics takes place in a dog-eat-dog world, where states keep a wary eye on potential rivals and constantly seek ways to improve their own positions,” Walt wrote, but he goes on to outline “four obvious reasons why realists are inclined to be dovish, especially here in the United States.” The first is that “realism encourages close attention to the material elements of power,” which have favored the U.S. ever since the end of World War II. During the Cold War, Walt notes, “The Soviet economy was much smaller and less efficient than America's and its allies were also less powerful or reliable than ours.” We were sure to prevail in the long run, provided we didn't undo ourselves “through bloated defense budgets or foolish foreign adventures.” Putin's Russia, obviously, is far less powerful than the Soviet Union. The realist logic is stronger than ever.

Walt's second point is the realist belief that “states tend to balance against threats rather than bandwagon with them.” Faced with clear-cut aggression, it's relatively easy to pull together a strong coalition — become the aggressors, even just arguably, and the logic reverses against you. Hence, realists “understood that other states might take various steps to counter the United States if it threw its own weight around too often or too carelessly.” What's more, far from bolstering your credibility, belligerence could be counterproductive: “realists understood that wasting resources on pointless wars might actually undermine your credibility, especially if it left the nation weaker or war-weary.”

Walt's third point is so obvious — “[R]ealists also understand that war was an unpredictable business, and even powerful states sometimes blunder into costly conflicts” — that it only needs a one-word explication: Vietnam.

But Walt's fourth point may be the most telling, for situating foreign policy in a domestic political framework: “[R]ealists are less prone to demonize opponents because they recognize that all states face competitive pressures and that most countries will act ruthlessly in order to protect their interests.”

For conservatives, however, demonizing opponents, and implicating them all in each other's bad deeds, is the whole point, the very essence of their tribal politics. After 9/11, neocons came to the fore because their enemy "other" was most readily demonized — even if Saddam Hussein was actually bin Laden's bitterest ideological foe. Things have changed a lot since then, as other demonizing frameworks have been deployed against Obama. A favorite one — Obama himself as Hitler — clashes violently with the notion of Obama as an incompetent weakling. But demonizing narratives don't have to be consistent, so long as they are consistently frightening to the point that rational thought becomes impossible. And that's what we see from conservatives today.

The racial aspect adds another dimension. Obama's entire political career has been defined by pushing back against the "threatening, black alpha-male" stereotype. Conciliation, not confrontation, is not just his style, but the core of his substance as well. The slightest break from this stance can trigger immediate backlash — as was seen in the knee-jerk response to his comment saying police acted  “stupidly” when they arrested Harvard professor Henry Louis Gates for trespassing in his own home. Since then, conservative activists and media have manufactured countless similar offenses as Obama has consistently failed to produce them himself. He has a “deep-seated hatred of white people,” as Glenn Beck alleged, without a scintilla of evidence, when Obama held his “beer summit” to atone for his momentary lapse of inconvenient truth-telling. And that has been the right-wing narrative subtext ever since. But the textual evidence has been virtually nonexistent, because Obama's personality and his politics have been so deeply wedded to compromise and conciliation.

Now, suddenly, it's possible for conservatives to finally admit Obama's not a dictatorial tyrant — now that they've found a way to hold it against him!

This swift reversal should not be surprising. White male anxiety about black manhood has always been so deeply irrational that it can switch polarities multiple times in a single racist rant. On a much larger, historical scale, in "Darwin's Athletes," one of the most striking reversals John Hoberman notes came about when blacks first began demonstrating their athletic prowess. Before that, white supremacy had been asserted across the boards — whites were superior to blacks in every way — mentally, physically, morally, spiritually. But when top black athletes emerged to disprove that, white supremacy reconfigured itself: Brute physical superiority was suddenly equated axiomatically with inferiority in every other realm.

Naturally, that's been a problem for white manhood ever since — even without considering the long history of top black scholar athletes, from Paul Robeson to Richard Sherman. The more that physicality, per se, is demonized in the black male, the more problematic it becomes for white males asserting their own masculine identities, particularly their power over women. This inherent, largely buried contradiction lies close to the core of the GOP's current problems, simultaneously losing the votes of women and minorities in a long demographic decline.

Faced with this reality, the GOP has no choice. No matter how riddled with contradictions it may be, faulting Barack Obama for his performance of masculinity is the only possible move Republicans have left. And if they can get away with it on "Meet the Press," then who's to say they're wrong?