I grew up in an inner city where everyone hustled. The work ethic that helped me sell drugs also got me to college 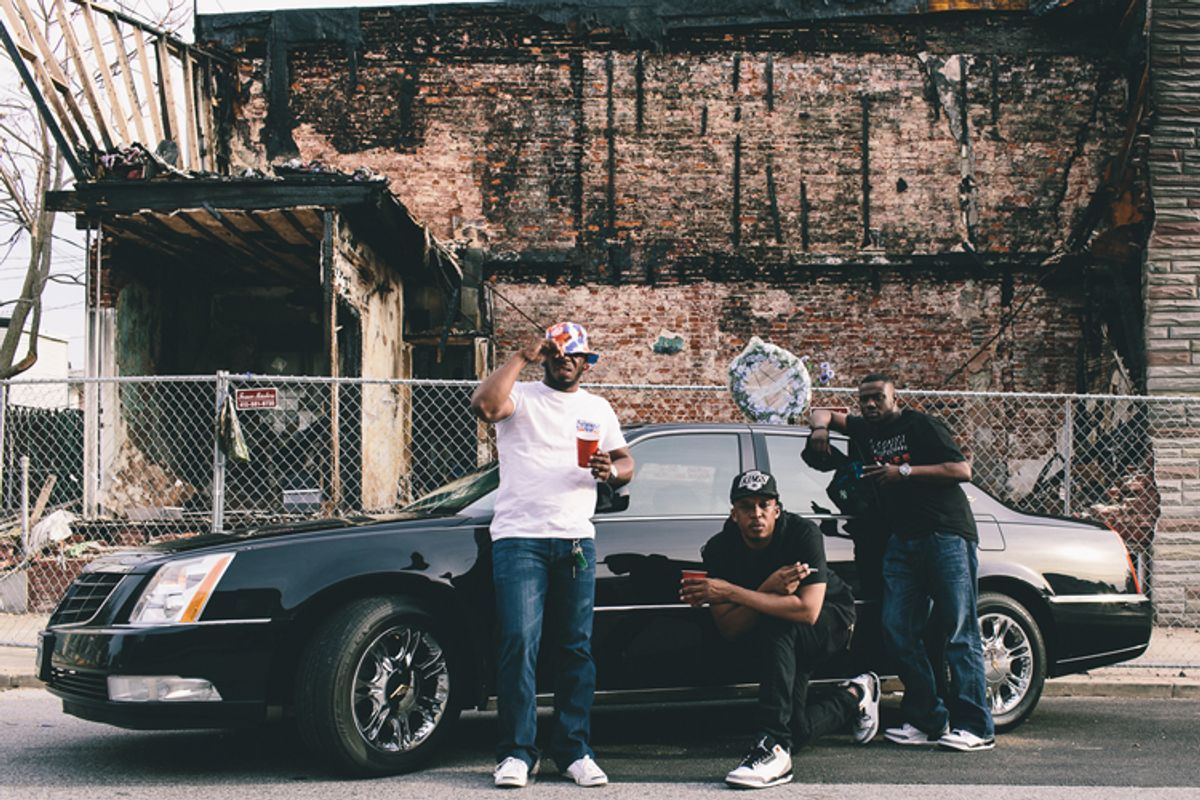 My grandma Famma Gill worked her ass off. Her worn, plump, diabetic hands scrubbed crud off chipped dishes minutes after she finished a 10-hour shift. She washed clothes, took care of her husband, did unpaid church work and cooked for 17 of my cousins and me at times. I don’t remember her taking a day off. She was a hardworking homeowner in the inner city who clocked in every day until she died.

And even though she prayed for me daily in the midst of her task, I stilled ended up on the corner like most of the men in my family. I didn’t adapt to her religion, but I did inherit her work ethic.

At 18, I’d often slice the tips of my fingers up while shaving marble-size pieces of crack into smaller bits before shoving them into long glass vials that I rocked off for $6 a pop. I’d suck the blood off my fingers, rubber band the vials into a bundle, tuck them in my sock and then go off to my block around 8:30 a.m. to set up shop for my 10- to 12-hour shift.

My homie Lil Duncan with the chubby face, who was about four years younger, would normally be shutting down and on his way to school. He sold heroin and normally started around 4 a.m. (you gotta beat the sunset to slang heroin) and then closed in time to drop his little sister off at school and make his first-period class.

On any random night, midway through my shift or around the time Lil Duncan was reopening his, you could catch us and another 40-plus loudmouth, Niked-up teens and early 20-somethings in a circle on our east Baltimore corner. Crackhead Lenny and his wife, Loraine, would most likely be in the center, beating the shit out of each other like gladiators.

“Left hook, Loraine! Left hook, Loraine!” some kids would yell as she’d belt Lenny into a three-point stance or flat on his ass. Loraine liked to step back, Ali-style, and dance a little while waiting for Lenny to gather himself.

The crowd would thicken, and sometimes pudgy-pale cops would come by to watch and make side bets like, “Lenny, you’re goin to jail if I lose another 50 on you!”

I never gambled on junkie fights, but I’d always watch. Duncan couldn’t care less; he’d scrape the block for more sales. He’d serve your customers while you were goofing off and watching the match. Duncan had a relentless money-making approach, rarely joking, never killing time and only finding joy in hitting his sales quota, which changed daily, just like the staff on our corners.

“Dat nigga done! Dat nigga done!” was the usual chant when Lenny couldn’t get back up. I saw Loraine beat Lenny’s ass a thousand times.

I remember one time when Lenny had a “Rocky” moment — he lunged forward with an overhand right that connected perfectly with Loraine’s chin, and she swallowed the blow like a small pill and finished him off with two to the gut and a firm hook that stood him straight up before laying him out like school clothes.

She then picked him up as always and gently placed him on a stoop like an infant before claiming her prize — $20 worth of crack and some high fives from us. The guys on the block I hustled with lived for these fights, or dope fiend races, or drinking contests or anything else they could bet on, and most of these events ended the same. The losers trading money for cheap shots from the winners, as we all reported back to our posts.

A year or so later, Loraine overdosed while Lenny was in prison or rehab or both. Either way he came back to the same corner as a transformed person. Lenny had doubled in size since the days when his wife used to beat the shit out of him, and his bumpy Braille-textured skin looked surprisingly clear and smooth, like he modeled for Neutrogena or something.

Another hustler offered him a free rock as a coming home gift, and Lenny proudly declined as he shook a fist full of multicolored NA key chains at us.

“No junk in a year, shorty, I’m off dat shit for good!” he cheered. I clapped for him and gave him few $20s as a coming home gift. We thought he’d be back.

Lenny landed a job working for the city but loved to stop by the corner and holler at us like, “Boy I sucks up allll the overtime! Check gonna be fatter than a project cockroach!” he’d say to us after late shifts.

When not working overtime he cut hair, or at least he tried and fed his new addiction for gold rings. He’d cover every finger. His hands looked like he was wearing brass knuckles. But more important, Lenny stayed clean and remained that way until he died.

Witnessing his transformation was one of the early factors that led me to believe I could beat the streets, too. Lenny once pulled me aside and said, “Boy, you can make money doing anything if you work hard and good at it.” I don’t remember the context of the conversation, but the phrase stuck with me as I transitioned from dealer to student.

Now, as a college grad, I still frequent the neighborhood as an example of exiting the drug game. And even though my student loan debt is high enough to push me into drug addiction, I’m happy to represent the redemptive power of education. Proof that shows if I can do it, you can, too.

My close friend Darnell Baylor works in the same east Baltimore neighborhood too, as a Psychiatric Rehabilitation Program worker. His job is to counsel juvenile offenders, make sure they go to school, keep their parole visits and to occasionally take them on field trips. I’ve been to work with him a few times — into the homes of the fatherless clients his agency pays him to visit. At times he’s the only positive male these young men see. The agency doesn’t pay Darnell to take on this fatherly role.

They also don’t pay him to make sure the kids can eat when the welfare runs out, or for haircuts, or for sneakers so they don’t get teased and tempted to sell. They don’t pay him to enroll these young men into sports and after-school programs. They don’t pay him to expose his clients to the National Great Blacks in Wax Museum or Walters Art Gallery on his off days, when he exposes them to different cultures and the necessary skills needed to stay out of prison. They don’t pay him to reward his clients when they excel in school by taking them to Ravens games and giving them concrete examples of the benefits of hard work. Baylor’s heart is bigger than both of the shoulders that he uses to lift his community.

Baylor applies the same work ethic to his 9-5 that a street kid like Duncan had on the corner, and it’s hard to believe that a person who is not a corporation, a group or a movement can have such an impact on an entire community. One day over drink, I asked Baylor how does he do so much and he simply responded with, “I don’t even know, but I make a way because it’s right.”

There’s a tattered house in the same community where Darnell works. It looks like it’s impatiently waiting to be torn down and could easily pass for abandoned. An anonymous woman in a crinkled shower cap tilts half of her head out of the second story window all day — overlooking Darnell and me, drug transactions, police brutality, kids playing, plump rats, hoop tournaments, teen pregnancy, city workers, dancing fiends, Christians evangelizing and everything else that goes on in our hood or any hood.

I don’t know if she has a disability or some sort of ailment, but I know she works all day. I saw her shower cap at 8 a.m., and I also saw the moon reflection bouncing off the same cap around midnight as well. Any time between those hours, you’ll see kids walk up to her window and use hand signals to show the amount of candy they want. She then reels down an old cloudy pencil pack attached to about 8 feet of tied together shoestrings. The kids dump their loose change into the pack and anxiously wait as she reels it up and then sends the stuffed pouch of goodies back down to them. She creates the same feeling for adults with loose cigarettes. And the list goes on and on.

The fact is that I can travel through east Baltimore or any urban inner city (BLACK) neighborhood for under 10 minutes and introduce you to the hardest-working Americans in our country. I know a guy that guts houses for $50 a day, a rack of uncertified tax preparers, too many single moms with triple jobs, some freelance freelancers, infinite party promoters, squeegee kids, basement caterers, back-alley auto mechanics, dudes of all ages selling bottled water and a collection of Mr. Fix Its, all living in a two-block radius. We are all American dream chasing, all trying to start our own business, all working our asses off.

Legal or illegal, the inner cities of America are our nation’s hotbed of side hustles.  Even people like me with college degrees need multiple streams of revenue to survive, and I gained that work ethic from living in the inner city. Seeing my grandma work 10-hour shifts showed me I could do the same.

There are a million grinding grandmas like mine, and Darnell Baylor isn’t the only person who gets paid for 40 hours a week but works 80. Every person I know is on his schedule and gained that work ethic from the inner city. If Duncan were exposed to a different way of life, he’d probably be running a Fortune 500 company.

Lenny and Loraine didn’t beg for drugs, they performed for them. And Lenny continued to work hard years after his crack addiction faded. The Candy and Cigarette lady should be celebrated for her innovation. And I’d bet that even if the cops rushed and ended her industry, work ethic and creativity would lead to her creating a new one.

She still works hard but will be only judged for not following traditional rules, which is unfortunate because there are so many hardworking people like us who are forced to create our own industries as a direct result of being isolated by society. To me that poses a bigger question. Why employment inequality for African-Americans is always identified as laziness?