The politics of black women's hair: Why it's seen with skepticism -- and a need to discipline 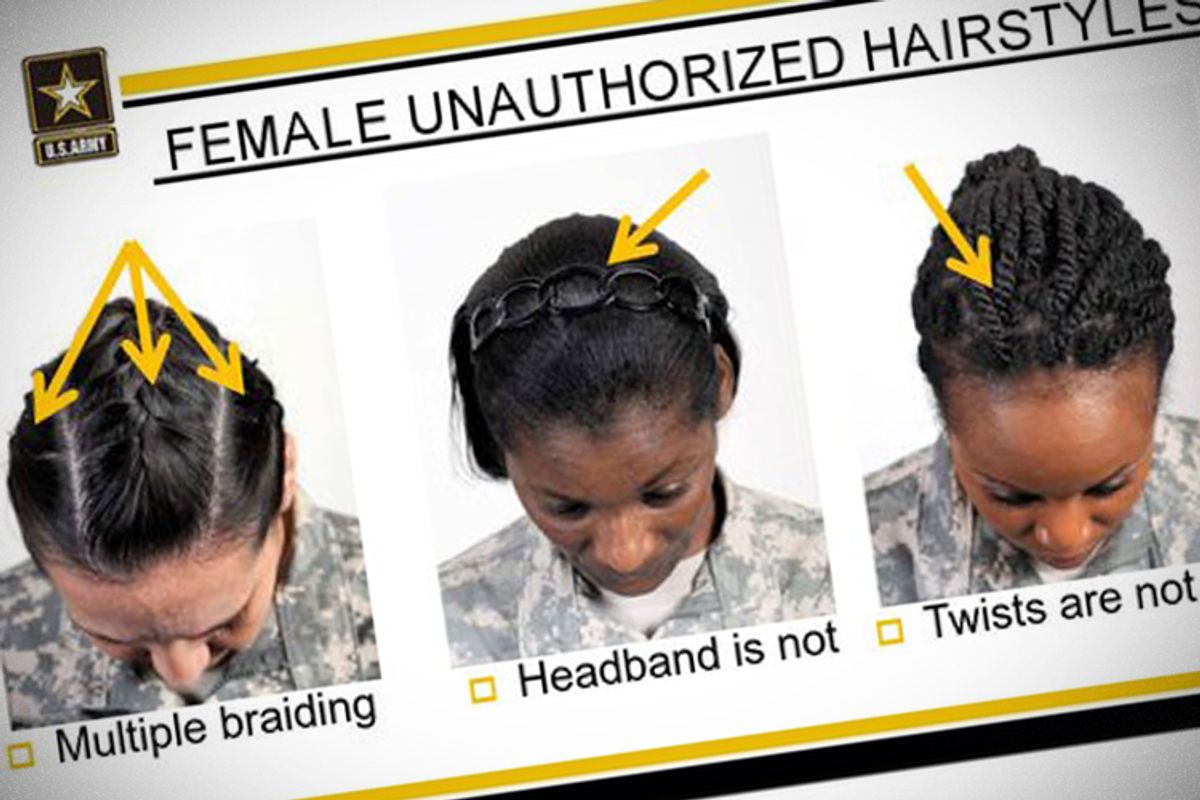 This image provided by the US Army shows new Army grooming regulations for females. (AP/US Army)
--

I cut off my chemically relaxed hair nearly 12 years ago on the eve of my graduation from college. For four years at my historically black institution, I had been getting up the courage to embrace the beauty of my hair as it grows out of my head, by watching black woman after black woman “go natural.”

In these 12 years I have never even remotely desired to go back to the expensive, high-maintenance chemical relaxers that I wore for 10 years. Not only is my hair healthier, but it costs less to maintain, and wearing it this way has freed me from an investment in European standards of beauty that see long, straight hair as the only kind of beautiful hair.

But when I reflect on new U.S. Army regulations that ban women from wearing a range of natural styles – “large cornrows, twists, and dreadlocks” – I remember that the long-held skepticism in black communities over natural styles has its roots in the structural and systemic regulation of black women’s bodies.

Before I got a relaxer at the age of 11, I endured the nightly ritual of having my mama part, grease and then plait my hair. Each morning, she took down the plaits and twisted them into long beautiful ponytails with barrettes on the end and ribbons tied at the top.

Each evening, I came home, hair frizzy, barrettes missing, the evidence of having played with youthful abandon at recess, to serious looks of disapproval and a heavy scolding.

I spent every other weekend at Mrs. Earline’s beauty shop, getting a wash and press. On the off weeks, my mother would wash my hair, sit me under the dryer for two hours, and then begin the painstaking process of greasing my scalp and faithfully applying a hot comb to my strands. And when mama finally made the big decision to give me a relaxer because my huge and unruly head of hair had become unmanageable, Mrs. Earline prayed over me while applying the product.

I have come to love these sacred cultural rituals of black womanhood. I also recognize that they are deeply political rituals, too.

Above all things, the care taken with a black girl’s hair signaled that she was loved and cared for, that she belonged to somebody. Having one’s children out in the world with unkempt, uncombed hair has always been considered a major form of parental neglect in black communities.

Those of us who have “liberated” our hair are quick to think of the continued black cultural investments in long straight hair, perms, weaves and ever-more ubiquitous lace-front wigs, as evidence of a kind of pathological investment in European standards of beauty that will always elude us.

But there is a long history of institutions regulating bodies in such a way that white bodies become the norm. In the case of the Army, they outrageously suggest that “Braids or cornrows that are unkempt or matted are considered dreadlocks and are not authorized.”

Though racial references are never used, these kinds of regulations are surely raced. The idea that “dreadlocks” or “loc(k)s” which is the more politically correct term, are merely matted hair is offensive, culturally ignorant and racist. There are far too many certified loctitians who take great care in choosing healthy grooming products for their robust clientele for people to continue to believe that locs are unclean and ungroomed.

Moreover, forcing members of the military to chemically or manually straighten their hair is a violation of black women’s bodily autonomy and right not to be exposed to harmful chemicals.

There is some evidence linking the chemicals in relaxers to increased risk of fibroids among black women. And the fact that these same chemicals can eat through a soda can in a matter of a few days -- as evidenced in an experiment in Chris Rock’s "Good Hair" documentary -- suggests that black women have every right to be wary of using these kinds of products.

However, there is something that is fundamentally problematic about deeming black women’s hair in its natural state to be unkempt. No other group of women is required by default to use chemicals to tame their hair or to pay money for expensive weaves, exploitatively culled from the hair of South Asian women. They may be required to keep it at a certain length, to keep it clean and combed, and maybe not to dye it. But that is it. Those are reasonable regulations in a military industrial complex that functions through complete disciplinary control over the body.

But the specificity of these guidelines encodes a belief that something fundamental to black women’s personhood and physical presence is excessive, unruly and must be subject to military discipline.

Our military’s role, in part, is to protect our national sovereignty and borders. Our national sense of identity is inextricably bound to our narrative of good, trustworthy soldiers. So these regulations have far broader implications for how our nation thinks of black women. Apparently, braids and locs prevent black women from being good soldiers. Clearly, this is an absurd statement, and that means the attempt to regulate these bodies in this way says something fundamental about the ways in which the codes that undergird our national sense of ourselves do not conceive of black women as being a part of the body politic. Rather than reimagining the norm, our bodies are conceived of as alien to normative standards and therefore in need of abrasive forms of regulation.

To assuage the protests of African-American women members of the military, an Army spokesman indicated that black women had been among those consulted about these new regulations.

Here’s the thing: Unfortunately, black women are and have always been some of the biggest policers of other black women’s bodies. Unfortunately, we know that black women tend to be viewed monolithically, even though we are not. So by attempting to make all black women look “respectable,” the black women who acceded to these ludicrous regulations hope to protect themselves from being looked down upon or treated unprofessionally.

When I cut off all my hair, my mother’s biggest concern was that her unemployed new college graduate daughter wouldn’t be able to get a job.

Though I did get a job with no problems, my mother’s fears were not completely unfounded. Workplace discrimination against black women on the basis of their hairstyles has been legally permitted in many instances. In 1981 Renee Rogers sued American Airlines for banning braided hairstyles. She lost her case because the court found that the policy applied to all employees equally. Though that ruling still stands today, other cases have been brought against the Hyatt Corp., the Marriott Corp. and the Washington, D.C., police force for having similar policies.

Kimberle Crenshaw created the term "intersectionality" in 1989  to capture the kinds of harm that happen to black women as a unique group, even if the discrimination is not happening to black people generally or women generally. And other legal scholars like Paulette M. Caldwell and Kenji Yoshino have written about the regulatory and offensive logics of this pervasive cultural and legal policing of black women’s bodies.

The very logic of the military industrial complex is itself violent and predicated on the total control and regulation of bodies both within and outside the military in order to secure America’s violent form of political, economic and social dominance over the rest of the globe.

In this regard, I understand why black women’s natural hair is viewed with skepticism and intent to regulate. Black hair is political. And when black women choose for cultural, stylistic and/or health reasons not to conform to normative Euro-American beauty standards, our social structure – while sensitive to very little – is calibrated to detect and discipline away even the most diminutive forms of defiance.

Perhaps this is why TSA also pats down my afro or twists – or my homegirls’ locs --whenever we travel.

African-Americans and Native people were the first victims of this kind of militaristic imperial logic that makes our nation possible, so our willing choice to serve in the military is a definite irony. Still, I recognize the ways that the military provides a viable economic option for black and brown people who have limited pathways into the American middle class. And in that regard, I can’t knock the hustle. But these are the kind of discriminatory, ludicrous and offensive marching orders that black women surely cannot be expected to follow.