10 ways of looking at a bad haircut

Maybe this is a good thing, a lesson in letting go. But I don't want a lesson. I want my old hair back 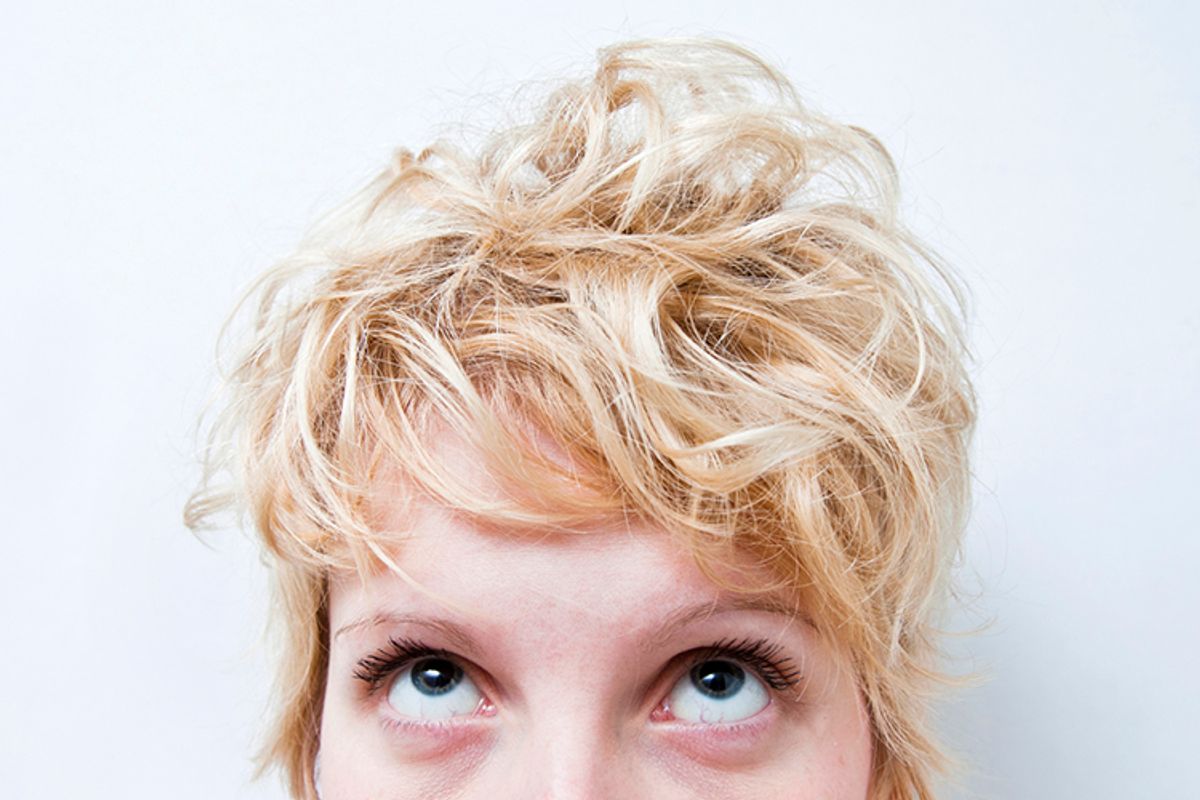 “Oh, just layer the hell out of it,” I said cheerfully.  That is what I said.  I felt secure as only a woman in possession of a full head of thick, curly, abundant hair, a mammoth Jew-fro that sometimes caused strangers on the street to stop and remark, can be.

“It grows so fast,” I complained/bragged.  That’s what lucky people do.  Complain about things they are secretly proud of. “There’s so much of it. It clogs up the shower drains.”

That’s why this is all my fault. The disaster. The close-cropped haircut from hell that makes me look like a matron at a German women’s prison.

Even as I saw the locks falling on the floor all around my chair; even as I was distracted by the laugh track from the stupid TV show that was playing — that should have been a clue, never go to a hair salon where they have a TV playing, for god’s sakes — even as the hairdresser and I had been amiably chatting about the heat and how we both love to swim and how he meditates every morning and doesn’t like to listen to the news before breakfast because it’s all too disturbing, I should have noticed that pieces of my identity, I mean hair, were falling all around me like autumn leaves.  But I didn’t.  I was distracted; that’s my excuse and I’m sticking to it.

It’s only hair.  It’s only hair, it’s only hair, it’s only … who am I kidding?  Ever since biblical times — and I’m sure for eons before that -- hair has never been only hair. It’s strength, potency, sexuality, beauty. It’s a woman’s crowning glory, it’s a statement, it’s political, it’s personal, it’s ethnic, it’s sexual. It’s nemesis and signifier, fetish and outlier. And yes, I know it grows back.  And yes I know that even as I write this there are women and men who are losing their hair to chemotherapy, and not just a random miscommunication with a stylist.

OK, on Halle Berry, short hair looks good.  And many women I know who have fine bone structure, great skin and huge, gleaming smiles can rock that pixie look and it’s adorable.

I am no pixie.  I do not have fine bone structure.  I depend on my hair to soften, camouflage and hide the asymmetries of my features, the lines between my eyes where I’ve frowned for too many hours at a computer screen, the hook of my nose, the width of my face.

So maybe this is a good thing. A spiritual lesson. A stripping-away, a necessary lesson in letting go.

I do not want a lesson in letting go. I just want to hang on to the way things are. Were. I want to dive on the floor of the salon and pick up all the pieces of my hair that are lying there like so many dead autumn leaves and glue them back onto my head.  Even though I know this is impossible, it’s what I want.

Here is a quote from Anne Hathaway, the actress, about her preparations for playing the role of a dying prostitute in "Les Misérables."

“I’ve now done back-flips out of windows, I’ve jumped off buildings,” she said. “And cutting my hair reduced me to, like, mental patient-level crying. I was inconsolable.”

Interesting that she’s kept her long gleaming hair close-cropped since then.

A man in conversation with a woman who has just gotten a bad haircut is a man walking into a minefield.  Anyone with an IQ higher than a bag of dirt recognizes this.  Fortunately my husband, Lee, has finely honed survival instincts.

“Oh honey, I’ll love you no matter how you look.”

I am calling him from the sidewalk right outside the salon. My bad haircut seems to have instantly transformed me into one of those people I hate, a woman who has loud, private, teary cellphone conversations right there on the street, for God and everyone to overhear.

“I look like a boy who’s had a run-in with a weed whacker in a dark alley,” I sniffle.

He laughs and then I make him promise not to laugh at me when I got home. I shut off the cellphone and go to Trader Joe’s. Pushing a cart up the aisle I see an old acquaintance.  At first she doesn’t recognize me; then she does a double-take.  Then she tries to pretend that she hasn’t done that, but too late, I have already seen her reaction.

“Alison!  I almost didn’t recognize you without your —"  I can see her trying to figure out what to say.

She instantly, gallantly rises to the occasion.  “It’s very cute!”

“No, it isn’t cute at all, but thank you for saying so. Thanks for trying.”

“It is, it is cute — all you need is some earrings, to soften it a little. Just give it a week to grow in and settle a bit, you’ll see -- it’ll be adorable.”

Lord love you for a liar, I think, as I watch her hastily wheel her cart away.

I remembered the time I had bumped into my ex-husband in a grocery store when he was going through treatment for the cancer that ended up killing him.  A pale, bald, older man was looking at me in the produce section, but I ignored him until he said my name.  Even then it took me another minute.  I wanted to cry.  Could this be Alan?  Where was my cuddly boyish first husband, with his exuberant mop of dark curls?  What had this stranger done with him?

My mother told me that when I was a very young ringletted toddler, strangers used to stop her and ask, “Where did you get her that permanent wave?”

“As if I would do such a thing to a child!” she’d sniff indignantly.  A natural beauty who never used cosmetics, my mother, once her four children arrived, kept her own curly hair cropped short in a tight little cap on her head like a Roman soldier. She ran two miles every morning, got four kids off to school, and then went off to her own job; she didn’t have time to fuss with time-consuming beauty rituals.

Every morning before the school bus she would brush and then yank a comb through my tangled mass of curls, aided by copious amounts of Alberto-VO5, while I writhed and screamed and cried and my three younger siblings clamored for attention in the background.

When I turned 11 my mother got tired of the daily scream fest and marched me into the beauty salon where a stylist — we called them hairdressers then -- took a scissors to my mane: snip, snip.  Skinny, gawky, I did look like a boy then, and more than one stranger called me “he” by mistake.

This is the ghost of bad haircuts past, this is the old story that haunts my current reality when I walk hesitantly into our kitchen and my husband sees me and folds me in his loving embrace, exclaiming that he finds the new, shorn me “cute.”

My father claims he fell in love with my mother at summer camp when he first saw her brushing her thick, dark, long hair in the sunlight.

“Something about the way it caught the sun …”

Years later he tried to describe what he felt, and I could see it clearly in my mind’s eye: one of those moments when the light hits at just such a slant, time stands still, and the fate of a family turns as a woman — a girl, really -- displays her beauty.

When my friend Carla was dying four years ago, of ALS, she told me her femininity became more important to her even as her body began to close down.  Carla had been an uber-busy, uber-accomplished mother and professor and singer and actress and writer and director.  Before she got sick she would sometimes do her errands in overalls, with no makeup and a bandanna wrapped around her head, as she dashed from writer’s group meeting to rehearsal to grocery store.  After she was confined to a wheelchair she did not leave the house without a full face of carefully applied make-up, a sexy skirt and high heels on her now useless feet.  It was a way she kept her dignity, her sense of her own womanhood, her personhood.

Even when she could no longer lift her arms to apply eyeliner and lip gloss herself, her friends or attendants did it for her, under her direction. Up to the end, her gorgeous, long, red hair was her signifier. When she performed as a torch singer, which she did until the disease reached her diaphragm and she could no longer sustain the notes, her skin glowed marble-white in the spotlight and her hair blazed like fire.

But a month before she died, Carla decided to chop off her beautiful hair and donate it to Locks of Love, a charity that provides high-quality wigs to women who have undergone chemotherapy.  Some of her friends were dismayed.

“You’ve lost so much — I can’t stand to see you give up one more thing,” one of them said.

“But that’s why I want to do it,” Carla told me.  “Everything else was taken from me by the disease.  This is something I get to choose to give.”

It was radical to let go of that which she could not hold onto.  And then to let go of even a little more. To actually turn her empty hands palm out, and shake away everything. I don’t know that I’m that brave.  There are days when I have trouble accepting the most basic facts of life; the past is past and gone.  And some losses are unrecoverable.

I have to say it was lighter, the short haircut. And easier to care for. The first three months after the drastic cut I woke up and that was it.  No wetting my hair under the shower and applying tons of product, no clapping on a hat when the wildness factor got out of hand.

Now, a year later, it’s all back again, thick, curly, frizzy, leonine. I can feel the warmth and weight of it against my cheeks and on my neck.  Sometimes I reach up and tuck a lock behind my ear and it’s as if my hand had become my mother’s hand, tucking me in at night, cool and firm.  That’s it.  No reading under the covers with a flashlight.  Good night.

Alison Luterman is the author of three books of poetry: "The Largest Possible Life," "See How We Almost Fly," and "Desire Zoo." She has published personal essays in The Sun, Modern Love, the LA Review and MORE Magazine. She also writes plays.