The Aussie artist says she needs "barriers" from touchy fans 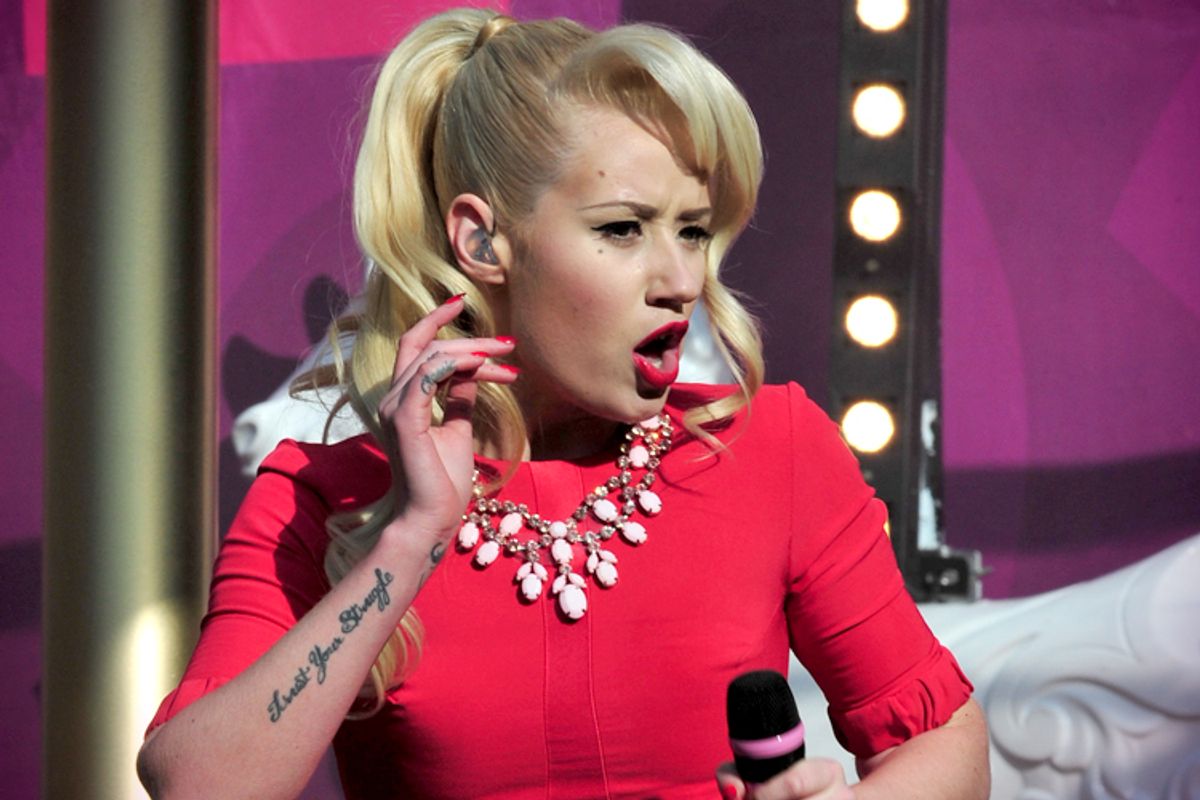 "I had to stop," she said. " I'm only doing 2,000 seaters but I still have to have barriers, even if it's 200 people, because people try to finger me. I will get lurk tweets for like a week before my show like, 'I'm about to go the Iggy Azalea show and I'ma finger her.' And I'll see it and be like, please don't. That's a violation. I don't actually like that stuff ... Like they think I’m real slutty, like, 'Oh, she got a song called P_ssy, I know what she wants. She wants these two fingers.' Why would I want a stranger to ever finger me? I don't want that."

Whatever you think of Azalea's music – the New York Times recently noted its "unrelenting weirdness" while Sam Biddle extolled the superiority of the "Top That" rap from "Teen Witch" -- we should not still have to spell it out that when a woman gets up on a stage to perform and maybe interact with the crowd, that is not an invitation to digitally violate her. Azalea told Hot 97, "No lie, I wear two pairs of underpants and a pair of skin colored tights and then my pants as a protection barrier, because there's no way I'm going to be intruded."

How did we get to this? Just a few days ago, I watched "The Punk Singer," Sini Anderson's blistering documentary about Kathleen Hanna, music, feminism and the riot grrrl movement of the '90s. It was striking for many reasons, notably for pointing out to the world that there was a brief time and place in music when a female artist could stand up in front of an audience and demand "Girls to the front" and "All boys, be cool for once in your lives" -- all while dancing with the word "slut" scrawled across her stomach. As Ann Powers says in the film, "Men could be in the room, but men could never dominate the room." And in a vintage clip, Hanna tells a crowd, "The more girls up front, the better ... It shouldn't be one person's responsibility in the crowd to deal with f_ckers." Yet a generation later, there they are.

To say that Iggy Azalea is not Kathleen Hanna is like saying Camden is not Paris. Azalea is working in a very different idiom and projecting a very different image. She's not in the business of claiming feminism for her generation. Yet the idea that any female performer should feel the need to limit her performance behavior, gird herself in multiple pairs of protective underpants and have to say out loud to her fans, "That's a violation," when they attempt to penetrate her is pretty ridiculous. And unlike the aggressive crowds of the riot grrrl days, Azalea says it's not just men who are perpetrators. She said, "Girls think it's cool, like, 'What? We've both got vaginas. It's fine.' Doesn’t make it OK." Yeah, I'd say that the fact that women still have to fight to not be molested at their own gigs -- by both men and women -- is definitely more than not OK.

So if you see a female onstage and maybe she gets within groping distance of your digits, don't try to put your hands in her pants, OK? Her music may be for sale but her body is still her own. And as Azalea says, "Buying my album for $12 doesn’t mean you get to finger me when I come to your city."