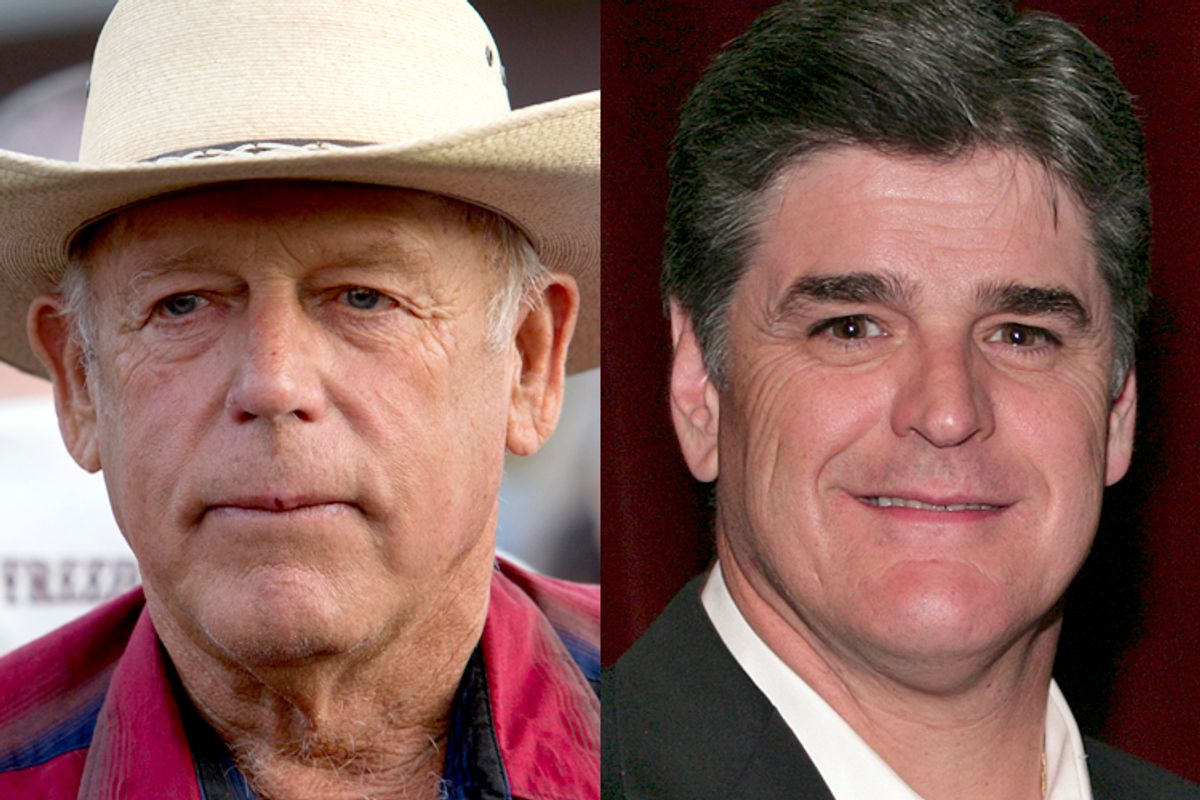 Consider the following hypothetical scenario: A left-wing militant says that he doesn’t recognize the legitimacy of the sweetheart deals between the federal government and Georgia-Pacific, a subsidiary of Koch Industries. Our militant says these deals allow the Koch brothers to despoil public lands in return for a nominal fee, and were produced by corrupt deal-making rather than democratic processes.

So our left-wing militant and some friends decide to help themselves to the lumber on Georgia-Pacific’s trucks as they roll down publicly funded roadways. Law enforcement officials ask him to stop, but he says he considers Georgia-Pacific’s agreement illegitimate and threatens an armed response if the authorities intervene.

Now imagine that our militant gets significant airtime – and praise – from a leading host on a major cable news network that is considered close to the Democratic Party. (I think you know the one I mean.) He’s treated like a hero, even as tensions escalate and the possibility of violence becomes more real.

What do you suppose the right – or, for that matter, law enforcement officials and the general public – would say about that host and his network? What would you say? Well, say it to Sean Hannity instead. Hannity’s questions to Bundy and extremist Richard Mack seem designed to escalate the “Bundy Ranch” conflict, rather than ameliorate it. No wonder Bundy calls Hannity his “hero.”

Hannity clearly doesn’t care about the criticism. So isn’t it time to direct it at his network instead?

After all, it is the Fox News Network’s corporate and political interests that are being served by Hannity’s promotion of right-wing extremist and natural-resource thief Cliven Bundy. Bundy’s anti-federal agenda is closely aligned with that of Charles and David Koch, major Republican donors who have been pushing for states to gain control over federal lands – so they can be sold or leased to people like the Koch brothers in deals that are even cushier than the one granted to Georgia-Pacific.

As the Institute for Public Accuracy explains, “Georgia-Pacific does extensive logging on public lands. Private logging of America’s National Forests is a heavily subsidized form of corporate welfare. Logging companies such as Georgia-Pacific strip lands bare, destroy vast acreages and pay only a small fee to the federal government in proportion to what they take from the public. They do not operate in the Free-Market when they log public forests.”

This for-profit despoiling of public property will only accelerate if the Koch brothers and their allies prevail. That’s why ALEC and other Koch-funded organizations are pushing laws that would demand that federal lands be turned over to state officials.

It’s bad citizenship, but it’s very smart business. State governments and agencies are much cheaper to purchase and control than federal ones. This greedy agenda is downplayed in Fox News coverage, or of the cheerleading that is taking place through the Koch-funded Americans for Prosperity organization.

Meanwhile, back at the ranch, tensions are rising. Militant extremists and anti-American groups like the Oklahoma Militia have been announcing support for Bundy. (“We’re going to resist you!” said one of the militia’s leaders.)

Fox News isn’t deterred by escalating tensions or the risk of violence, however. Its website, for example, has been promoting a blog entry titled “Cliven Bundy and the American Police State.”

“America is a pressure cooker with no steam valve,” says the author, “and things are about to blow.” The author adds: “What we're really faced with, and what we'll see more of before long, is a growing dissatisfaction with the government and its heavy-handed tactics by people who are tired of being used and abused and are ready to say ‘enough is enough.’”

If the Bundy ranch is a pressure cooker, Fox News is turning up the heat.

Predictably, the combined lure of potential Koch money and melodramatic extremism has led to a steady stream of Republican politicians making pilgrimages to the site of the potential showdown. Some Republican state politicians are even talking about seceding from the union.

The Koch brothers and Fox News are apparently perfectly willing to stoke resentment in the midst of an incendiary and potentially lethal standoff out of nothing more than self-interest and ideological extremism.

Sean Hannity rarely seems to reflect on the moral implications of careless words – at least his own. Preventing Nancy Pelosi from becoming House speaker was, said Hannity, “a cause worth fighting and dying for.” When the killer of churchgoing Unitarians was found to have a Hannity book on his shelf, he showed no sign of introspection – and never toned down his rhetoric.

Now Hannity has responded to criticisms of his Bundy coverage by MSNBC’s Ed Schultz and Al Sharpton Jr. by attacking them personally. He also made a cryptic comment in response to Schultz’s claim that “I think Sean Hannity is cheerleading for armed conflict with the federal government.”

Hannity responded: “Now, the No. 1 thing that Ed Schultz said was true, but guess what? If I was a network exec at NBC News I might be ashamed of having this man work for me.”

However you interpret those words, it’s clear that Hannity will not be held accountable to a reasonable ethical standard. But what about his corporate bosses either at Fox, or the Koch brothers? Who’ll hold them accountable?

Some on the right will try to make this a free speech issue. But this isn’t about the right to say unpopular or dangerous things. It’s about the abuse of a powerful megaphone for selfish ends, with potentially disastrous consequences. The freedom to speak doesn’t exempt one for moral responsibility for what is said.

Fox has promoted Bundy’s threat to start a “range war.” They seem to have forgotten the typical “range war” plotline in old American westerns. You know the one. Wealthy, cruel cattlemen try to terrorize small farmers and the townsfolk until they submit to their outrageous demands. Fox, Hannity, the Koch brothers: They’re the bad guys in this movie.

What happens if the last act turns violent?