Shakespeare on drugs: The secret narcotic history of the world's greatest playwright

The Bard's drug use has long been the subject of speculation. But is there truth behind the rumors? 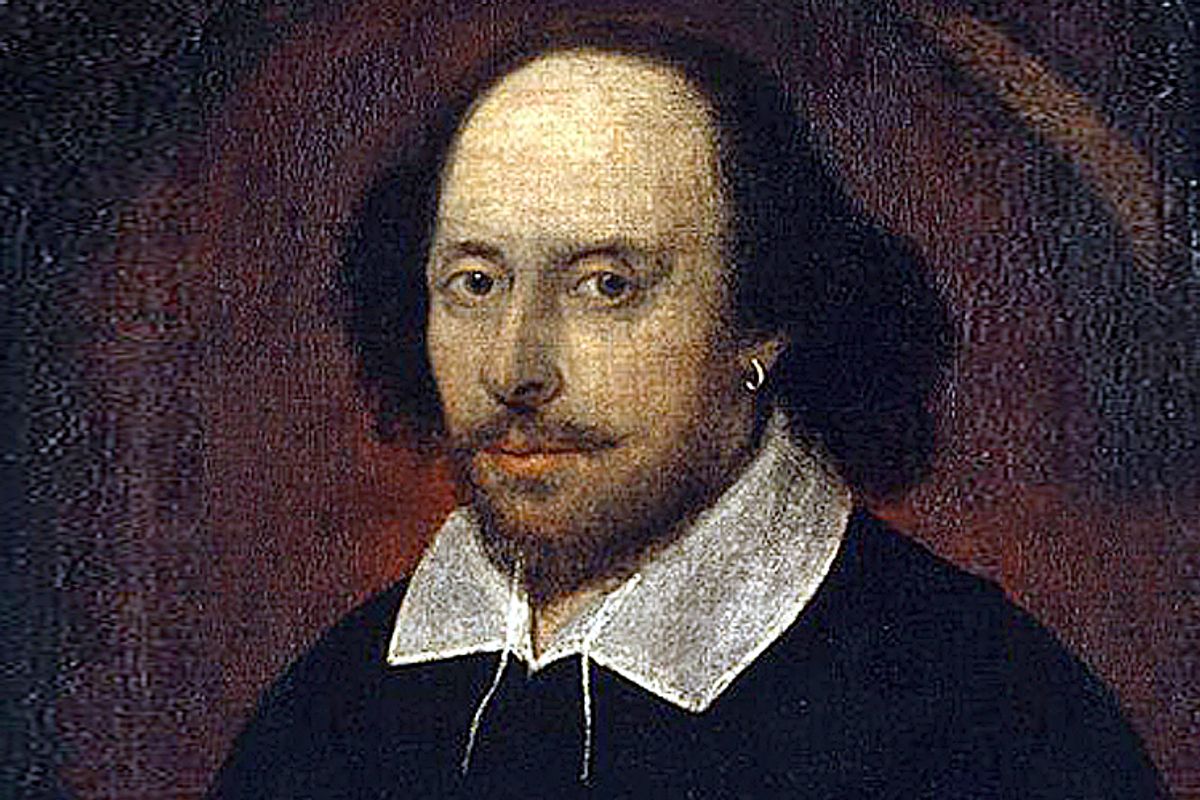 Today is William Shakespeare’s birthday, by tradition at least—his 450th. It’s also the anniversary of his death in 1616. So what does this have to do with Substance.com? Plenty. For a start, the Bard is speculated to have used several drugs besides alcohol. Research published in the South African Journal of Science in 2001 revealed residues of cocaine, marijuana and myristic acid, a nutmeg-derived hallucinogen, in 17th-century clay-pipe fragments that were dug up from the garden of Shakespeare’s home in Stratford-Upon-Avon. As if the idea of the world’s favorite wordsmith getting high weren’t arresting enough, the cocaine discovery significantly pre-dated the previous earliest evidence of cocaine in Europe. (Of course, we won’t let the fact that only circumstantial evidence links these pipes with Shakespeare get in the way of some good speculating.)

Francis Thackeray, the anthropologist behind that clay-pipe analysis, even applied in 2011 to exhume Shakespeare’s skeleton to try to determine whether he was indeed a pothead, as well as his cause of death. The teeth could have been telling: “If we find grooves between the canine and the incisor, that will tell us if he was chewing on a pipe as well as smoking,” said Thackeray. But Shakespeare’s tomb bears an explicit warning about just this kind of proposal—”Bleste be the man that spares thes stones, / And curst be he that moves my bones”—and the Church of England has yet to grant permission.

As for that cause of death, could it have been alcohol-related? John Ward, who was a vicar at the Holy Trinity Church in Stratford where Shakespeare is buried, tantalizingly wrote in his diary, “Shakespeare, [poet Michael] Drayton and Ben Jonson had a merry meeting and it seems drank too hard, for Shakespeare died of a fever there contracted.” But Ward’s diary entry was made 50 years after the event, which casts doubt on its accuracy.

What we know for sure is that drug users abound in Shakespeare’s writing. His drunks alone could stock a tavern—including Sir Toby Belch of the “cakes and ale” party in Twelfth Night, and Falstaff, who appears—wasted—in three different plays and declares in Henry IV Part 2 (Act IV, scene 2), “If I had a thousand sons, the first humane principle I would teach them should be, to forswear thin potations and to addict themselves to sack [fortified wine].”

Drinking is a pastime for everyone from kings to the Porter in Macbeth. The latter appears having been “carousing till the second cock,” and describes alcohol as “a great provoker of three things” (II, 3). An impatient MacDuff (he’s been banging on the castle gates for a while) asks what they are: “Marry, sir, nose-painting, sleep and urine.”

The Porter then describes some other complications that afflict boozers:

Lechery, sir, it provokes, and unprovokes; it provokes the desire, but it takes away the performance. Therefore, much drink may be said to be an equivocator with lechery: it makes him, and it mars him; it sets him on, and it takes him off; it persuades him, and disheartens him; makes him stand to, and not stand to; in conclusion, equivocates him in a sleep, and, giving him the lie, leaves him.

Shakespeare’s plays contain other drugs, too—a shed-load if you include the poisons, most of which we’ll omit. Just don’t expect toomuch of the consumption to be consensual.

A Midsummer Night’s Dream: Oberon, king of the fairies, tells his spritely servant Puck to score him an obscure drug. It’s ”a little western flower, / Before milk-white, now purple with love’s wound, / And maidens call it love-in-idleness,” he explains. “Fetch me that flower, the herb I shew’d thee once.” Oberon plans to use the extract from this herb—which has been identified as Viola tricolor, aka “tickle-my-fancy” or “Jack-jump-up-and-kiss-me”—to play an ethically dubious trick on his wife, the fiery fairy queen Titania, with whom he’s just had a fight:

The juice of it on sleeping eye-lids laid / Will make or man or woman madly dote / Upon the next live creature that it sees.

Which, as Titania’s bad luck would have it, is a man named Bottom, who currently has the head of a donkey.

Having drugged his own wife, Oberon can’t resist distributing more of the goods to four young Athenians—Hermia, Lysander, Helena and Demetrius—who have entered the forest in the hope of sorting out their complicated love situations. Naturally, cases of mistaken identity ensue and Puck bungles the delivery. Pretty soon the forest resembles the scrag-end of an open-air rave during the ecstasy-fueled second summer of love, with affections flying all over the place. In 2014, this would probably be called an “epidemic.”

Modern chemists have tried to recreate ”Puck’s Potion,” without achieving the desired effects.

Romeo and Juliet: Juliet is desperate: Her secret new husband, Romeo, has been banished and her oblivious parents are about to force her to marry someone else. So the 14-year-old girl goes to the cell of the trusted friar who presided over her clandestine wedding and begs for his help. It’s a tricky situation, but a sensible man might see options on the table: Smuggle Juliet to Mantua to be with her husband? ‘Fess up to her parents and see if they’ll come around?

So tell us, Friar Lawrence, why do you—a holy man, let’s not forget—happen to have a drug to hand that you confidently tell us will knock a girl out for two days like some early form of GHB? It’s one of the great mysteries in Shakespeare. Having instantly produced the potion, our comfortable friar reels off the instructions and side-effects as smoothly as if he’s reading out a modern medicine’s prescribing information (IV, 1):

Take thou this vial, being then in bed, / And this distilled liquor drink thou off; / When presently through all thy veins shall run / A cold and drowsy humour, for no pulse / Shall keep his native progress, but surcease: / No warmth, no breath, shall testify thou livest; / The roses in thy lips and cheeks shall fade / To paly ashes, thy eyes’ windows fall, / Like death, when he shuts up the day of life; / Each part, deprived of supple government, / Shall, stiff and stark and cold, appear like death: / And in this borrow’d likeness of shrunk death / Thou shalt continue two and forty hours / And then awake as from a pleasant sleep.

Now who wouldn’t say yes to that plan? A recent BBC article suggests that Lawrence’s potion “could have been Atropa belladonna, also known as sleeping nightshade.” It notes, “Back in 1597, in his book The Herball or General Historie of Plantes, John Gerarde wrote that a small quantity leads to madness, while a moderate amount causes a ‘dead sleepe’ and too much can kill.”

Which is kind of what it ends up doing: When Romeo doesn’t get the memo about the plan, he opts for suicide and to that end hits up a drug dealer/apothecary.

“Come hither, man. I see that thou art poor,” he winningly introduces himself (V, 1). “Let me have / A dram of poison, such soon-speeding gear / As will disperse itself through all the veins / That the life-weary taker may fall dead.”

Mantua is in the grip of some Iranian-style drug policy: “Such mortal drugs I have,” replies the apothecary, “but Mantua’s law / Is death to any he that utters them.” Of course, as in the real world, economics prevail anyway, and Romeo scores his poison of choice. And he uses his dying breath to praise not his beloved, but his dealer (V, 3):

Macbeth: If Friar Lawrence’s methods are questionable, Lady Macbeth’s are unquestionably wicked. Her eyes on the throne, she spikes King Duncan’s guards so that her husband can murder the monarch in his sleep: “…the surfeited grooms / Do mock their charge with snores,” she gloats (II, 2):

I have drugged their possets / That death and nature do contend about them / Whether they live or die. [Insert maniacal cackle].

A “posset” consists of hot milk curdled with ale, wine or hard liquor—and might well, you’d think, have sleep-inducing properties even if it weren’t laced with dangerous amounts of NyQuil.

Othello: Some other references in the plays don’t depict drug use but still raise interesting questions about the playwright’s specialized knowledge. Caliban’s suffering in The Tempest (II, 2)—”Sometime am I / All wound with adders who with cloven tongues / Do hiss me into madness”—while technically induced by Prospero’s spirits, recalls nothing so much as a bad (myristic?) acid trip. And in Othello (III, 3) the arch-villain Iago, having implanted jealous thoughts in Othello’s mind, broods of his target:

Not poppy nor mandragora / Nor all the drowsy syrups of the world, / Shall ever medicine thee to that sweet sleep / Which thou owedst yesterday.

“As this sole Shakespearean reference to the poppy shows,” writes David Hoeniger in A Gathering of Flowers From Shakespeare, “he had the narcotic in mind, and therefore neither the common corn poppy of southern, nor the long-headed poppy of northern, England….However, in Shakespeare’s time the plant merely served as a garden ornament, for then, as still a hundred years ago, opium was imported to England from the Far East.”

Sonnet 76: Shakespeare’s sonnets have always inspired particular fascination because they’re supposedly the writings in which the elusive man most reveals himself. Speculation has feverishly focused on the “Dark Lady” and the “Fair Youth” to whom lots of these 14-liners are addressed. But scholars have also wondered what to make of the “compounds strange” and the ”noted weed”—credited with “invention”—in this example. Certainly if it were a modern song, we’d have little hesitation in concluding, “Drugs!”

Why is my verse so barren of new pride?
So far from variation or quick change?
Why with the time do I not glance aside
To new-found methods and to compounds strange?
Why write I still all one, ever the same,
And keep invention in a noted weed,
That every word doth almost tell my name,
Showing their birth and where they did proceed?
O, know, sweet love, I always write of you,
And you and love are still my argument;
So all my best is dressing old words new,
Spending again what is already spent:
For as the sun is daily new and old,
So is my love still telling what is told.

Will Godfrey is the Editor-in-Chief of Substance.com.

MORE FROM Will Godfrey