A likable loner goes on a rampage in Jeremy Saulnier's "Blue Ruin," an unforgettable yarn of crime and punishment 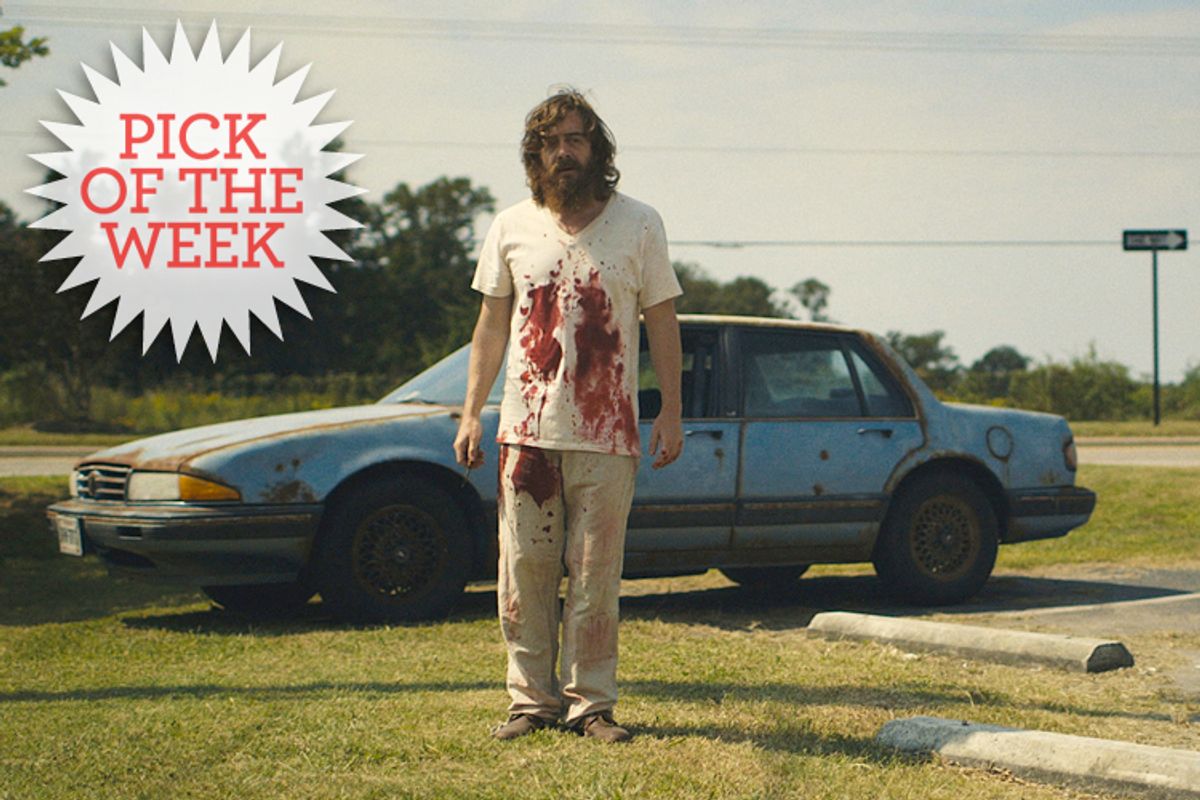 For the first 15 minutes or so, Jeremy Saulnier’s “Blue Ruin” feels like one of those low-budget American indie films where no one talks and nothing really happens. A shabby, shaggy homeless man whose name we don’t know scrapes through life in an unidentifiable beach town, scrounging for food in the trash bins along the boardwalk, avoiding the daytime crowds of wholesome vacationers and sleeping in his decrepit mid-‘80s Pontiac Bonneville. Hang in there. While “Blue Ruin” may not have movie stars and avoids the conventional beats of Hollywood action cinema, this hit from last year’s Cannes and Toronto festivals is all the better for that. It’s a brilliant, slow-burning American revenge thriller that hardly puts a foot wrong, a work of startling violence and profound conscience that announces the arrival of an exciting young director.

As we will eventually learn, the homeless man’s name is Dwight, played with tremendous delicacy by the unassuming Macon Blair. He thrives on not being noticed and leads a peaceable if marginal existence, occasionally breaking into unoccupied houses to bathe but otherwise committing no crimes. That’s about to change. A sympathetic cop in the Delaware oceanfront town where Dwight has the Bonneville parked brings him in for some bad news: Someone Dwight knows is about to be released from prison, although we don’t know at first what the guy has done or how the two are connected. Saulnier, who wrote, directed and shot “Blue Ruin,” feeds us information parsimoniously, gently shifting gears out of the melancholy idyll of Dwight’s existence – and then slamming down the accelerator.

Whether he knew it or not, this was the catalyst Dwight was evidently waiting for. He reconnects the Bonneville’s battery and puts in a few gallons of gas; he does his best to buy, steal or scrounge weapons of some sort, with decidedly mixed results. He waits outside a Virginia penitentiary, watching as the members of Wade Cleland’s backwoods clan show up to collect him in a stretch limo blasting hip-hop. There are notes of deadpan farce here and there in “Blue Ruin” that recall Saulnier’s directing debut, the 2007 Brooklyn horror-comedy “Murder Party,” although the general tenor of this film is definitely not super-hilarious. Then Dwight goes after the newly paroled Wade, with only one end in view. Saulnier thrusts us on the horns of a classic moral dilemma, in that Dwight never stops seeming like an essentially gentle, sweet and troubled guy, but one who has embarked on an ill-advised (and ill-informed) course of action that can only end in disaster.

When we find out exactly why Wade Cleland went to prison, we may well root for Dwight to finish him off in as painful a method as possible, as does Dwight’s suburban-mom sister, Sam (Amy Hargreaves). But the past is rarely a straightforward matter of good and evil – not in real life, and certainly not in crime movies. We only get bits and pieces of the tangled rural Virginia history of the Cleland family and Dwight and Sam’s family, but it’s enough to make us suspect that Dwight is making the same mistake made by every tragic hero since the Greeks: He’s answering blood with blood, without really knowing or caring whether he’s in the right, and without thinking too much about the consequences. Furthermore, as in most families, not all the trauma we see in “Blue Ruin” involves physical violence. When Sam realizes that she has to take her children and flee to avoid the vengeful Clelands, she tells Dwight, “I’d forgive you if you were crazy. But you’re not. You’re weak.” Given what Dwight has already done and experienced, that’s grossly unfair, and everything he does from that point forward is meant to prove her wrong.

Saulnier manages the mood of laconic rural gothic masterfully, alternating scenes of silent, mounting tension with grotesque-comic set pieces: Dwight alone, in his sister’s empty house, awaiting the inevitable arrival of an armed band of Clelands; Dwight alone in the Bonneville the next day, trying to extract a hunting arrow from his leg with a pair of drug-store pliers. While “Murder Party” was uneven and undisciplined, perhaps on purpose, every performance in “Blue Ruin” is beautifully calibrated, from Hargreaves’ bottled-anger Sam to Kevin Kolack as a Cleland brother who begrudgingly respects Dwight for breaking his leg and holding him captive in the Bonneville’s trunk. Best of all is Devin Ratray as Dwight’s long-ago high school buddy Ben, a deranged but cheerful gun nut and nightclub bouncer who turns out to be exactly the guy you want on your side in a nihilistic showdown with an entire family of murderous rednecks.

Any point “Blue Ruin” might be making about gun violence and/or mental illness in America has already been made, and believe it or not I’m not going to lean too hard on interpreting it as a message movie. Nor am I going to moralize about whether there’s something degenerate about encountering this level of bloodshed in what is essentially an art-house film. Compared to mainstream action movies, the body count of “Blue Ruin” is not all that high – but it packs a wallop.

You could tell this same blood-drenched fable about two families locked in an erotic dance of death and a loner out for vengeance in medieval Japan or the townships of Johannesburg and arrive at pretty much the same destination. Saulnier is unquestionably channeling the history of American crime cinema here, from film noir to Clint Eastwood to the Coen brothers, and this pulse-pounding, mordant and surprisingly moving breakthrough earns those comparisons. America has exaggerated and mythologized the human love-hate relationship with violence – our longing to see it as a force of justice, and our understanding that it almost never is – and embraced the role of its global purveyor and ambassador. But the enormous role we play in the world’s imaginative life suggests that we fed a hunger that was already there.