It's not just wing-nuts! Slate gets liberal opposition to the Common Core all wrong 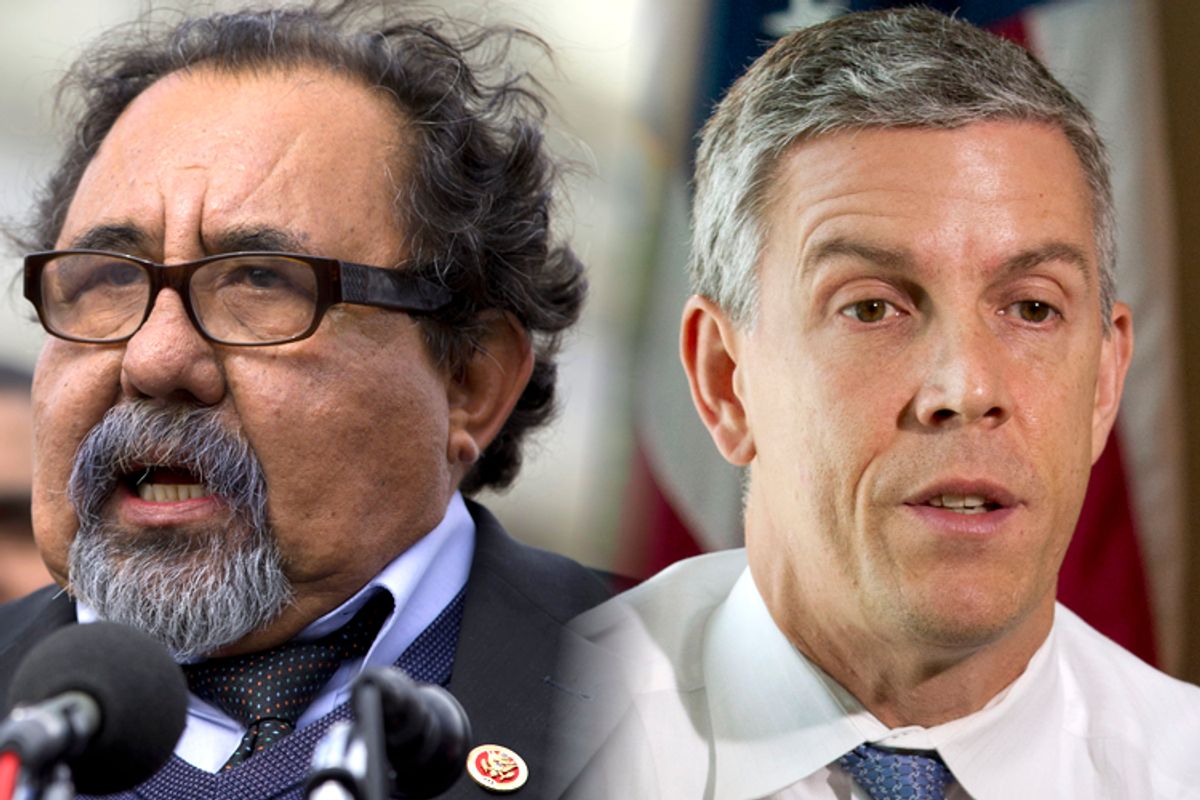 Is education too difficult a subject for some liberals?

Lots of other topics are easier to write about for sure: What to say about the minimum wage? Raise it! Same-sex marriage? Yes! Unrestricted gun ownership? Bad! Granting undocumented immigrants a path to citizenship? Good!

But for lots of controversies in the education arena – charter schools, for instance, or the Common Core State Standards – the answer is often: It depends.

Yet left-leaning opinionators frequently go after education topics with all the sophistication of a high school cheerleader on game day.

The latest example of this is from Jamelle Bouie who waded into the current controversy about the Common Core the other day with a piece on Slate. Sizing up the controversy over new standards as exclusively a matter of "conservative tribalism" versus "President Obama’s embrace of it," Bouie decided I'm with Obama. And, That's it.

By conflating differences of opinion over the new standards with Republican objections to light bulb regulations, the Koch Brothers war on solar energy, and George Will's disdain for mass transit, Bouie assigned disputes over the Common Core to the category of other polarized issues that liberals are supposed to contest against conservative troglodytes.

Nowhere does Bouie consider that maybe some liberals have problems with the Common Core and that maybe there are some good reasons for their concerns.

The Liberal Side Of Common Core Opposition

Just recently we've seen thousands of New York parents pull their kids out of new standardized tests that are a feature of the Common Core rollout in their state. Long Island is hardly a hotbed for the Tea Party.

Some time ago, NPR looked at the controversy over the Common Core and discovered that it actually does not fall along clean liberal vs. conservative political lines.

The report quoted Stan Karp of the decidedly left-leaning New Jersey Education Law Center and Rethinking Schools who said, "This is a set of standards that does not reflect the experience of many groups of students served by public education, does not reflect the concerns that many parents have for what they want to see in their education, and that really doubles down on a testing-and-punish regime."

More recently, U.S. News reported, "The push against Common Core is coming from both sides of the political aisle." The article stated, "Liberals broadly agree that American students need to catch up with education leaders in the rest of the world. But in Common Core they see a rigid, one-size-fits-all approach, drafted in private, that ignores how teachers teach and how children learn. Generally, liberals fear the curriculum, and the standardized evaluations, will amplify the high-pressure, high-stakes atmosphere that No Child Left Behind, President George W. Bush's education initiative, helped create."

The reporter quite correctly identified "classroom teachers" as "the most vocal pushback to Common Core."

It's The Teaching, Stupid

Leaders of the nation's two teachers' unions, where have been ardent backers of the Common Core, recently expressed second thoughts. At a meeting of state education chiefs, President of the American Federation of Teachers Randi Weingarten, who had been a vocal supporter of the standards, stated, "The poor rollout of the common core had led to 'immobilization' among teachers and a distrust that those in positions of authority knew how to do the job right."

"During the same discussion," the Education Week reporter wrote, "National Education Association President Dennis Van Roekel, while he said the union remained squarely behind the standards themselves, also expressed concern that teachers were not getting enough time to learn the standards themselves, to find common-core aligned curricular materials, and to talk to parents as well as each other."

For sure there are many teachers who like the Common Core and who are doing all they can to implement the new standards in their classrooms.

But not all teachers agree, and they have specific, well-argued reasons for their arguments. One of those teachers is Anthony Cody, a retired teacher who spent 24 years teaching and mentoring other teachers in the Oakland, California school district. His writings about the Common Core, published at his blog on Education Week, recently won him an award from the Education Writer's Association.

One of Cody's columns critiquing the Core found "10 colossal errors" with the new standards, including:

Understanding these objections requires more than simplistic side-choosing. You have to get into the weeds.

Fortunately, many of those of the liberal bent have decided to do so, and Cody was able to report, in another article in his series on the Common Core, that "Opposition to the Common Core Grows Across the Political Spectrum."

Cody is not a lone voice in the forest. In 2011 he helped organize a Save Our Schools March in Washington, D.C., that brought some 5,000 teachers, parents, and public school advocates to the Ellipse. The event featured nationally recognized speakers including education historian Diane Ravitch, scholar and best-selling author Jonathan Kozol and actor Matt Damon.

Among the throngs at the event, the only representative of the right-wing political spectrum was a reporter from the libertarian magazine Reason who got into a heated dispute with Damon that went viral on YouTube.

Now Cody, along with Ravitch and other public school advocates, head up the Network for Public Education that, among other things, supports "schools that offer a full and rich curriculum for all children, including the arts, physical education, history, civics, foreign languages, literature, mathematics, and the sciences."

Would that pundits, online and off, bothered to listen to the supporters of these marches and organizations like NPE, what they'd likely hear are arguments that actually transcend political polarity – such as, what is important to teach to children and when, the role of democracy in determining what schools should teach and how, the degree of professional autonomy teachers should have to be at their most effective, and concerns about having our children's and our country's education destinies being hijacked by a market-driven private sector that cares mostly about making money.

Don't those sound like issues a real liberal could get into?

Hey Liberals, Do This Instead

For sure, rightwingers have proclaimed opposition to the Core for the most ridiculous reasons.

Ken Libby, a doctoral student of education at University of Colorado-Boulder, has collected many of the most bizarre theories and classified them with the Twitter hashtag #corespiracy. Any liberal columnist who wants to get his or her fill of wild Common Core wingnuttery can go to a rundown of some of those tweets organized by Audrey Waters.

But when liberal bloggers and opinion mavens decide they want to have a deeper understanding of the Common Core controversy, they should talk to teachers.

That's a much harder piece to write for sure. But declaring Common Core a tribal war is no help at all.