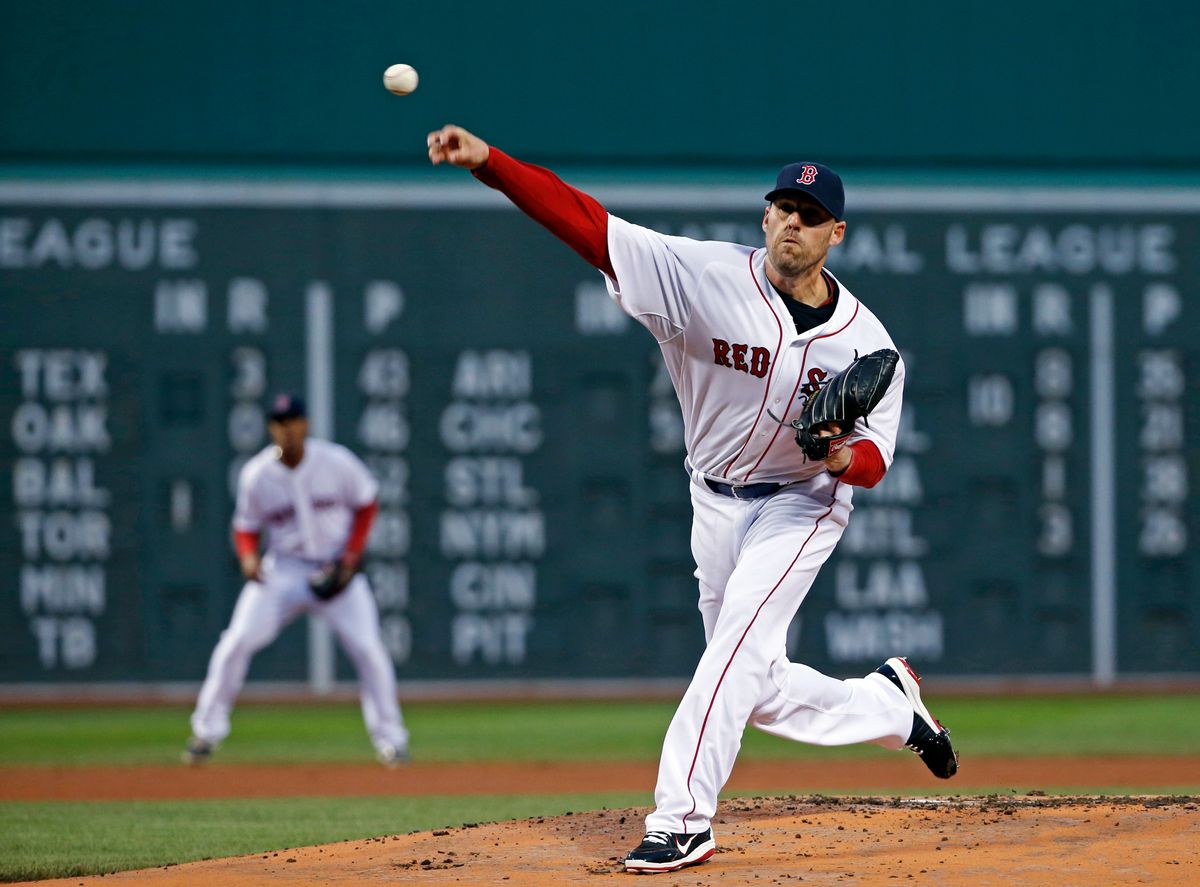 BOSTON (AP) — The pine tar on Michael Pineda's neck was a stain for the New York Yankees.

And Pineda was "sad" and vowed not to do it again.

The Yankees' right-hander was ejected for using pine tar less than two weeks after appearing to get away with using a foreign substance in another game against Boston, and the Red Sox beat New York 5-1 on Wednesday night.

The previous time, Pineda said he used "dirt" on his right palm to get a better grip in cold weather in a 4-1 win over Boston on April 10 in New York.

This time, he said he decided to put pine tar on the right side of his neck after allowing two runs in the first inning on another chilly night so he could use it to grip the ball.

"I'll learn from this mistake," a downcast Pineda said. "It won't happen again."

He was thrown out in the second inning when plate umpire Gerry Davis found the substance on the right side of Pineda's neck after Red Sox manager John Farrell asked him to check. Pineda walked from the mound without protest.

"When it's that obvious, something has got to be said," Farrell said. "Our awareness was heightened, given what we had seen in the past."

Davis said he found pine tar and Pineda gave no explanation as he left the mound.

Cashman said that in a similar situation, "I would want my manager to do what John Farrell did."

He said the issue was discussed with Pineda after the game on April 10 and again after he was ejected. Now he expects Pineda to be suspended.

"He did what he did, but we're also responsible that somehow he got out of our dugout and was on the field in that manner," Cashman said. "That never should have happened."

Pineda (2-2) had nothing on the right side of his neck in a photo of him on the mound in his tough first inning, when four of the first six batters reached on hits.

Another photo taken in the second showed a shiny horizontal substance on his upper neck below his right ear. After Pineda struck out the first two batters and had a 1-2 count on Grady Sizemore, Farrell talked to Davis. The umpire went to the mound, looked at the ball then touched the substance on Pineda's neck with his right index finger. Then he gestured with that same finger, indicating Pineda's ejection.

"He had a hard time gripping the baseball. Unknown to us, he put it on and went out there," Girardi said. "It's a young kid. I don't think he's trying to do anything, cheat. I think he's just trying to go out there and compete."

Rule 8.02(b) says a pitcher shall not "have on his person, or in his possession, any foreign substance. For such infraction of this section the penalty shall be immediate ejection from the game. In addition, the pitcher shall be suspended automatically."

"We will talk to the umpires tomorrow and review their report before taking any action," Major League Baseball spokesman Michael Teevan said.

In recent suspensions of pitchers for pine tar, Tampa Bay's Joel Peralta was penalized eight games in 2012, the Los Angeles Angels' Brendan Donnelly 10 days in 2005 and St. Louis' Julian Tavarez 10 days in 2004. The suspensions of Donnelly and Tavarez were cut to eight days after they asked the players' association to appeal, and Peralta dropped his challenge with no reduction.

In Pineda's previous start against the Red Sox, Farrell didn't see a photograph of Pineda's hand until the fourth inning; when Pineda came out to warm up for the fifth, his hand was clean.

On Wednesday, with the game time temperature at 50 degrees, Sizemore started the first with a triple and scored on Dustin Pedroia's single. With one out, Mike Napoli singled Pedroia to third. After Mike Carp flied to left, A.J. Pierzynski singled up the middle, scoring Pedroia.

After Pineda's ejection, David Phelps came in and completed the strikeout of Sizemore.

John Lackey (3-2) allowed one run and seven hits in eight innings with 11 strikeouts and no walks. Koji Uehara struck out three in the ninth in a non-save situation.

"There is such a thing as too many strikes if you're hitting the white part of the plate," Lackey said. "I was fortunate enough tonight to be hitting the corners more times than not."

Napoli had three hits and Boston scored two runs in the first and two more in the third. The Yankees scored on Alfonso Soriano's sacrifice fly in the sixth.

NOTES: Girardi pushed a television camera focusing on Pineda in the tunnel. Girardi called it a "private area" and said "the camera is meant for the dugout and not the tunnel," adding "all I did was turn it." ... Boston Marathon men's champion Meb Keflezighi threw out the ceremonial first pitch wearing a Red Sox jersey with the name "MEB" and the number "26.2" on the back, the mileage distance of the race. ... Ortiz played in his 1,643rd game as a designated hitter, matching Harold Baines' major-league record. ... Boston sent OF Daniel Nava to Triple-A Pawtucket and recalled RHP Alex Wilson. ... Mark Teixeira struck out four times. ... Derek Jeter was 0 for 4, ending his 11-game hitting streak. ... In the finale of the three-game series Thursday night, New York's CC Sabathia (2-2) pitches against Felix Doubront (1-2).