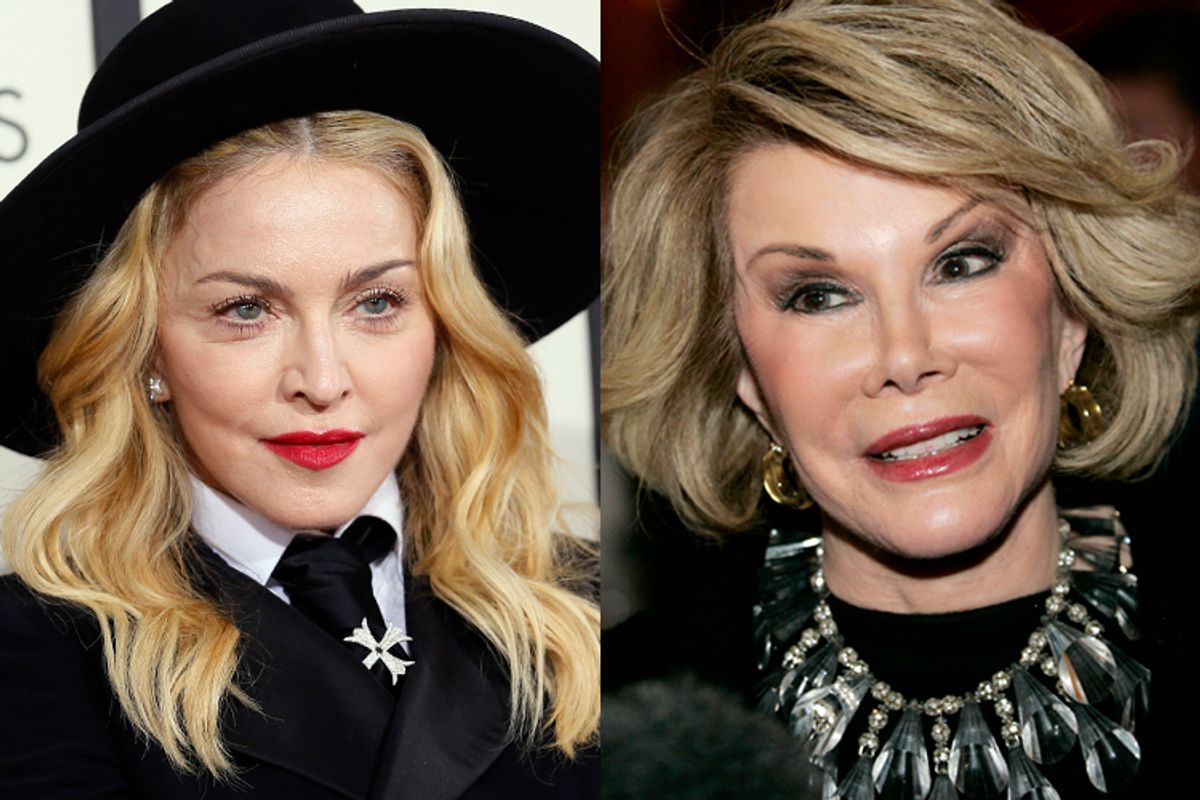 I'd like to say a few words about that unfortunate recent incident that you're mad about, on behalf of those involved. Those close to the individuals themselves know it would never be their intention to find themselves in this kind of situation. They probably understand now that their words could be interpreted incorrectly, and if they offended anyone with those words, I am here to apologize on their behalf. Fortunately, the majority of people who've been following the story understood the true meaning of what happened and have been very supportive. Thank you for that.

There. Does that make you feel better? Does a half-assed, going through the motions pantomime of contrition satisfy your desire for atonement? Because if so, feel free to whip that one out whenever a public figure does something offensive and then has the cheek to not say sorry. Apply it to Madonna, for instance, who in a BuzzFeed word-association game this week described both the notoriously anti-gay rights leader Vladimir Putin and apolitical green vegetable kale as "gay." (She also described Hillary Clinton as "angry.") Fans were quick to call out the legendarily gay-friendly icon for saying "a stupid thing" and being "irresponsible," criticizing her for being "as culturally sensitive as a bull in a china shop." Yet despite inciting a flurry of headlines for the "outrage" the singer, who this past winter rolled out an  "I'm not racist" mea culpa for dropping a racially charged hashtag on Instagram, has thus far not commented on her disparaging use of the word "gay."

But Madonna's not facing nearly the amount of heat for not saying sorry as another famous blonde -- Joan Rivers -- is. The 80-year-old comic has been asked to apologize for her remarks on the "Today" show earlier this week, when she described her living accommodations by noting, "Those women in the basement in Cleveland had more room." The attorneys for Gina DeJesus and Amanda Berry, two of the three women held captive by Ariel Castro until they were rescued last year, immediately issued a response, calling the remark "beyond shocking and disappointing" and saying, "Our clients are strong, private women who have endured unwanted and often painful media attention for quite some time. They now have to endure this, which is a new low, and we believe a sincere apology is warranted." Rivers, however, refused to oblige, telling the Cleveland Plain Dealer, "I know what those girls went through. It was a little, stupid joke. There is nothing to apologize for. I made a joke. That’s what I do. Calm down. Calm f------ down. I’m a comedienne. They’re free, so let’s move on."

This is the thing to bear in mind when demanding someone make "a sincere apology." You can, occasionally, make someone say sorry. But you can't ever make anybody be sorry. And if you're carrying around that expectation that you're owed anything more than your own right to criticize, you're going to be disappointed a whole lot in life. I'm completely in favor of speaking up when someone says something ignorant or offensive (unless that person is on a stage and holding a microphone, in which case, you need to sit the hell down and wait for an appropriate time and venue to register your objections). I do it aaaaaaall the time. I don't like "gay" as a pejorative or lighthearted cracks about abduction and rape, so I try to avoid both. But I also don't believe that a coerced apology is a useful one, any more than I believe people should be leaned on to support issues they don't truly embrace, or disavow the causes they've supported in the past -- though plenty of Brendan Eich's detractors felt otherwise. Haven't we all endured enough vague, self-absolving apologies and robotically delivered, blatantly publicist-generated acts of contrition to see how hollow and dumb they are?

We have every right to say, when confronted with something we perceive as insensitive, "I don't like what you said," or "That's hurtful," or just, "Wow. Gross." We are on considerably shakier ground, however, when we say, "I don't like that, ergo you owe me something, Stephen Colbert!" That's not how free speech works. That's how an irrational sense of entitlement does. And I'd rather authentic silence than a fake apology, any day.