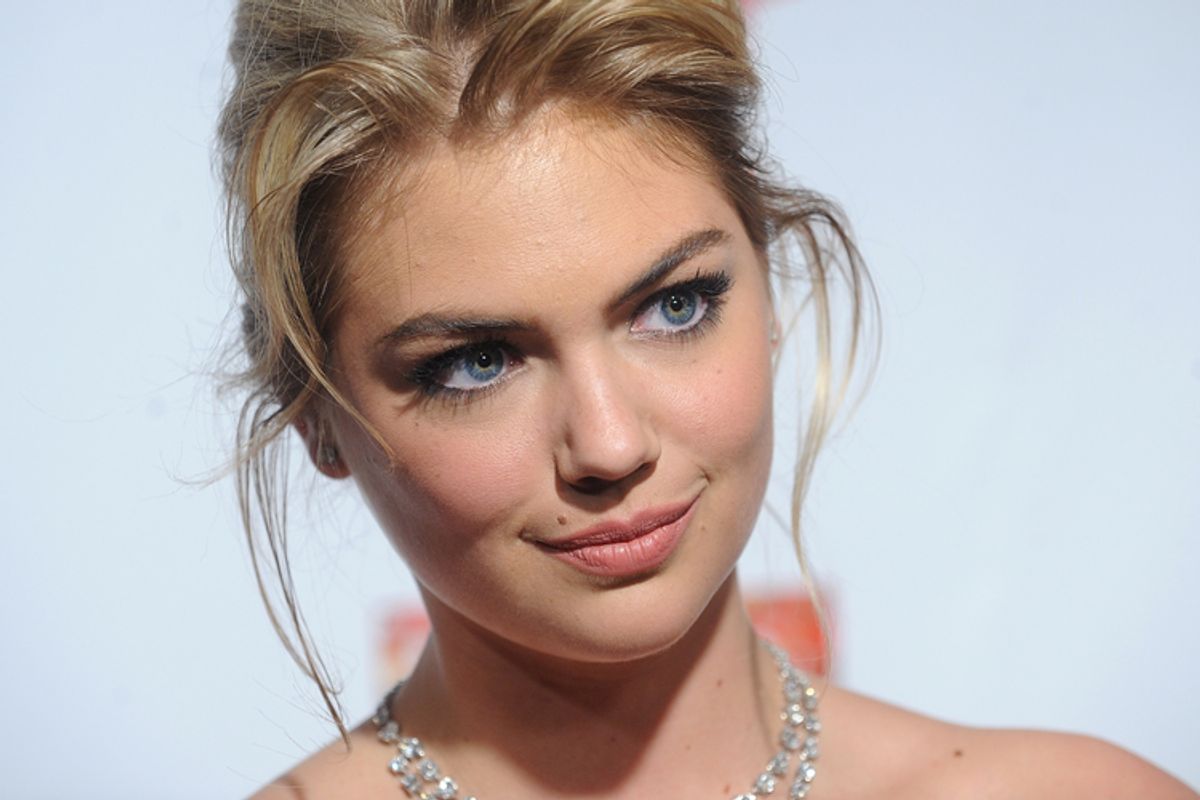 Kate Upton's making her film debut this Friday in "The Other Woman" -- that is, if you don't consider "Cat Daddy" a work of cinematic art.

Before Upton rose to such professional heights that she could sell a movie simply by bouncing in slow-motion during promos, she was a reasonably well-known swimsuit model dancing provocatively in a video shot by Terry Richardson. (That's here, though for the narrow slice of humanity that has not yet seen it: be advised it's not safe for every workplace.) Upton had heretofore been a model for Guess and the Sports Illustrated swimsuit issue -- the YouTube clip of her gyrating "Cat Daddy" dance catapulted her to icon status. But the supermodel is considerably more trailblazing than she might seem.

The media has long been obsessed with the idea that Upton is somehow an "unconventional" beauty. The 2013 cover story about her in Vogue began with a set-piece of the model at the gym trying to lose weight, and described her as "curvaceous." All this is to say that her physical appeal seems to be in line with a male fantasy of what beauty is, rather than the ideals of a fashion-magazine editor.

But Upton isn't just famous for her appearance. She's famous for projecting a particular kind of emotional and physical openness. She's good-humored, amiable and transparent. In the Vogue profile she happily shares her workout regimen; the "Cat Daddy" video makes her seem at once free-spirited and coy.

She's a perfect encapsulation of that overused trope: the "Cool Girl," taken from Gillian Flynn's bestselling thriller "Gone Girl." In the book, Amy, striving so desperately to be a "Cool Girl," rants about the particular sort of girl guys love, one who, memorably, never "wants 'just one' of your chili fries, because she orders a giant order for herself." The appellation has recently found itself attached to Jennifer Lawrence, for her breezy navigation of superstardom. But the specific way Upton embodies her "cool-girlness" marks an important difference.

Lawrence, for all her success, has somehow mostly avoided being sexualized -- her hit "Hunger Games" franchise is about how able and strong she is, and her performances for David O. Russell have arguably been more about baring over-the-top emotion than her body. She's "cool" about the banalities of Hollywood, making big jokes of awards shows and press junkets, cutting through the prestige everyone was beginning to see as slightly phony anyway. And it's easy to be cool when you're tripping adorably up stairs and complaining that there's not enough pizza at the Oscars.

But where Lawrence's "cool" is an attitude of general disregard for the fripperies of showbiz, Upton's is an eager willingness to go along with whatever's demanded of her. Want her to strip near-naked in Antarctica, for some reason? Sure! Want her to boogie in a bikini on camera? Sounds fun! Want her to appear in a movie that casts her as a vapid young lady who inspires ire in two older and more accomplished actresses? Why not? She isn't necessarily rebelling against Hollywood's standards; she's fully, happily owning them.

So as her colleagues at the top of the modeling industry strive to monetize their brands by presiding over reality series or cookie companies, Upton has figured out how to make herself into an icon: by exuding  an amiable willingness to do whatever it takes. Despite the narrative drilled into our heads by the cult of Vogue and years of Tyra Banks' high dudgeon on "America's Next Top Model," Upton seems to think modeling is not as serious as everyone else makes it out to be. If only every every branch of the entertainment industry had someone whose role was solely to let a little air out of the balloon, to convey that it's all in good fun.