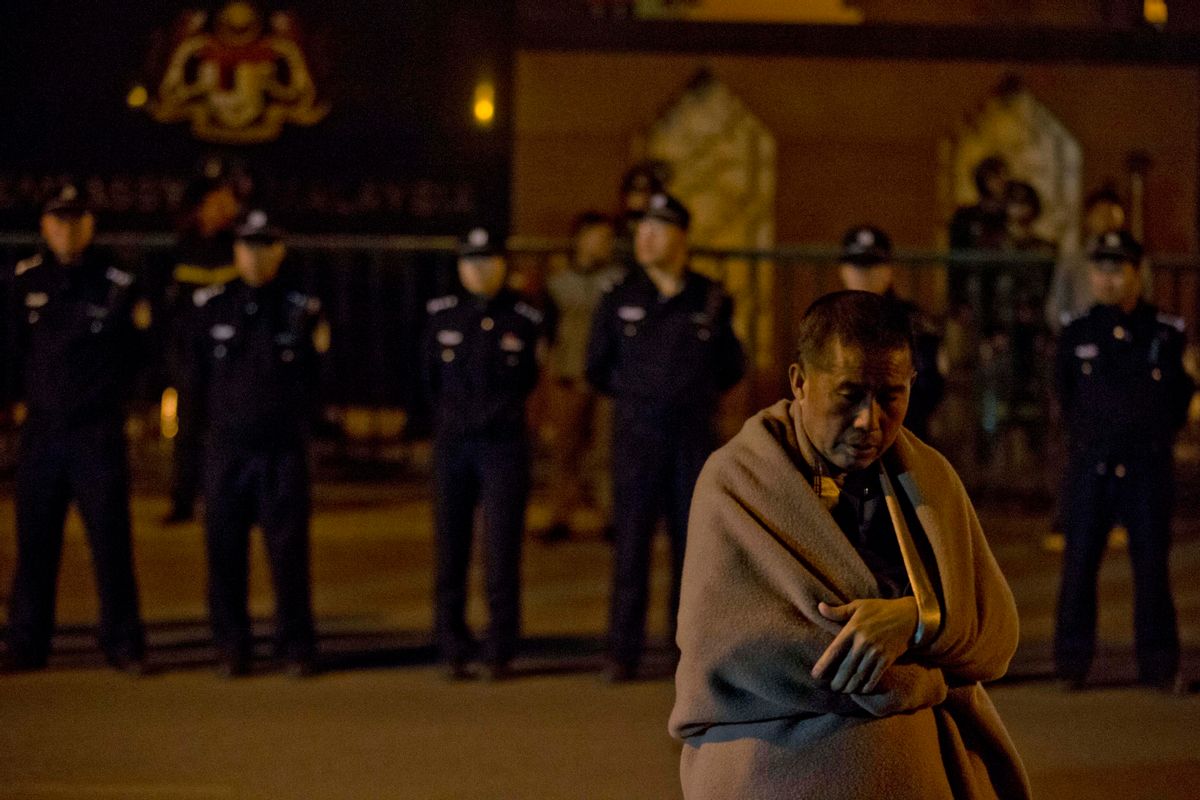 CANBERRA, Australia (AP) — The seabed search for the missing Malaysia Airlines jet is set to widen as a sonar scan of the most likely crash site deep beneath the Indian Ocean nears completion without yielding a single clue, authorities said Friday.

Meanwhile in Beijing, about 50 relatives of Chinese passengers on the plane continued a sit-in protest outside the Malaysian Embassy after officials failed to show up to update them on the search.

The Australian search coordination center said a robotic submarine had scanned 95 percent of a 310-square-kilometer (120-square-mile) search area since last week but had found nothing of interest. The U.S. Navy's Bluefin 21 is creating a three-dimensional sonar map of the ocean floor near where signals consistent with airplane black boxes were heard on April 8.

The search area is a circle with a 10-kilometer (6-mile) radius, 4.5 kilometers (2.8 miles) deep off the west Australian coast. The search of the target area is scheduled to be completed within days.

"If no contacts of interest are made, Bluefin 21 will continue to examine the areas adjacent to the 10-kilometer radius," the center said in a statement.

"We are currently consulting very closely with our international partners on the best way to continue the search into the future," it added, referring to Malaysia, United States and China.

Malaysia hopes to release to the public next week a preliminary investigation report on the plane's disappearance, an official in Malaysian Prime Minister Najib Razak's department said.

"We are also looking at releasing the cargo manifest and aircraft seating arrangement," said the official, who declined to be named, citing departmental policy.

The report has already been sent to the United Nations' International Civil Aviation Organization, the official said.

The Malaysian government, which has primary responsibility for the investigation, has been criticized for mismanaging the search, concealing information about the tragedy and of being too slow to update families of the missing on developments.

In Beijing, the relatives had marched to the Malaysian Embassy from their hotel Thursday night after Malaysian officials failed to show up for a promised briefing.

"We keep on waiting because we want the news," said Steve Wang, whose parents were aboard the flight and who has served as a representative for the relatives.

"What we are concerned about is where is the plane, and where are our loved ones," Wang said.

Some relatives scuffled with police officers who tried to prevent them leaving the hotel. On Friday morning, more than 100 police and paramilitary officers had cordoned off the area around the embassy in a northeastern diplomatic district that is also home to the U.S. Embassy.

Australian Defense Minister David Johnston said this week that an announcement was likely next week on the next phase of the search for the Boeing 777 which vanished with 239 passengers and crew — mostly Chinese — on board on March 8 during a flight from Kuala Lumpur to Beijing.

He said the next phase was likely to deploy more powerful side-scan sonar equipment that can delve deeper than the Bluefin 21.

On Friday, up to 8 planes and 10 ships were to search for debris over a 49,000 square kilometer (19,000 square mile) ocean expanse 1,600 kilometers (1,000 miles) northwest of the city of Perth where the search is headquartered, the center said.