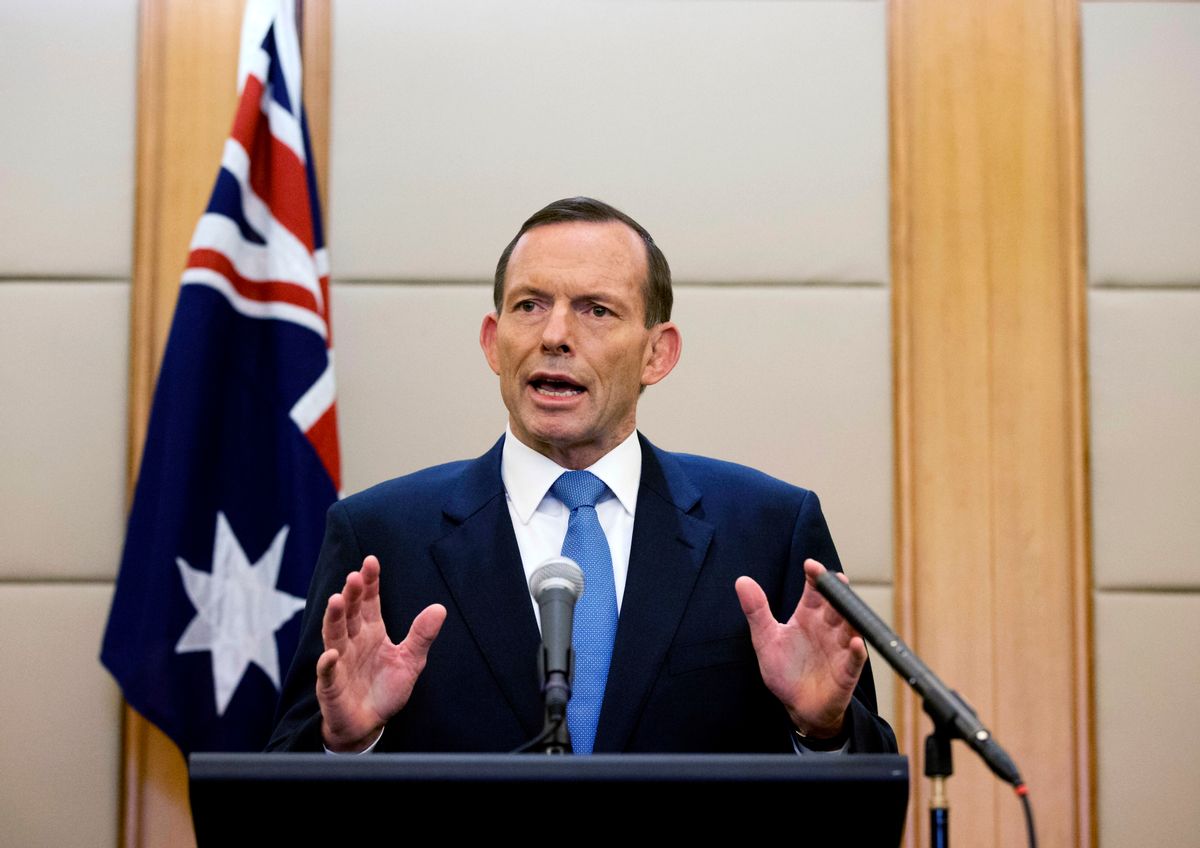 Tony Abbott, opposition leader of Australia's Liberal Party since 2009, assumed office as Prime Minister on September 18, 2013. Since then, he has done Australia and the world a great many disservices in a very short amount of time.

From his rolling back of green initiatives and his disregard for climate change to his hardline stance against asylum-seekers and promotion of social conservatism, it sometimes feels like Abbott is taking Australia back into the dark ages (he suggested bringing back knighthoods, if it's a literal example you want). And his dangerous approach to the environment threatens to take the world with him.

Here are the 11 worst things that Tony Abbott has done in his short tenure, beginning with the worst-of-the-worst: his policies on energy, climate change, and the environment.

1) He plans to allow logging in some national forests

In a March 2014 speech to workers and executives in the timber industry, Abbott called loggers "the ultimate conservationists" — a statement that couldn't possibly make any less sense — and he pledged to open up protected forests to logging while preventing other forests from receiving new protection.

Abbott promised to create a Forest Advisory Council and he's asked UNESCO to remove 74,000 hectares of forest in Tasmania from its list of world heritage sites.

Then Prime Minister Julia Gillard established the independent Climate Commission in 2011 to "provide reliable and authoritative" information about global climate change. Abbott shut it down. According to his environment minister, Greg Hunt, the closure was part of "plans to streamline government processes and avoid duplication of services."

Abbott can't reasonably shutter every environment-focused agency, but he can certainly cut their funding. He's targeted the Australian Renewable Energy Agency (ARENA) for major reductions to its $3 billion budget. There will be a $435 million cut, and an addition $370 million will be deferred for a decade.

3) He has promised to repeal carbon and mining taxes

Abbott's administration, via the Great Barrier Reef Marine Park Authority, approved a permit that will allow for the construction of a coal port by dredging 3 million cubic meters of soil and dumping it 15 miles from the reef. Further investment in coal energy is plenty dangerous on its own without messing with one of the world's greatest natural wonders.

Strangely, the permit approval came one day after the administration reported to UESCO that the reef, which is a world heritage site, was experiencing "a serious decline in hard coral cover."

Citing the effects of shark attacks on tourism, Western Australia asked the Abbott administration to exempt the region from a federal law banning shark culling. The cull included Great Whites, which are endangered.

The Humane Society called the decision "a complete disgrace" and thousands of Australians protested, but Abbott was basically like:

Abbott's domestic environmental policies have obvious implications for the world's climate, but his anti-environment influence has extended beyond domestic politics.

In November 2014, Brisbane, Australia will host the G20 summit, an annual meeting of heads-of-state and finance ministers from the world's largest economies. As the host nation, Australia has some control over the agenda. The world, and Europe in particular, was shocked when Abbott decided to take climate change off the docket even though it was on the agenda at the most recent G20 summits in France, Mexico, and Russia.

Abbott explained that he didn't want the agenda "cluttered" by topics that weren't directly related to growing economies.

The Abbott administration is planning large cuts to the Commonwealth Scientific and Industrial Research Organization (CSIRO), the country's main agency for scientific research. The cut could be as large as 20 percent of the present annual budget of $750 million.

Immunologist and Nobel Laureate Professor Peter Doherty called the cuts "a sure way of accelerating our transition to a Third-World economy."

8) He's failing when it comes to immigration and asylum

Every year, thousands of immigrants seek asylum in Australia. They board ships from Indonesia, Thailand, Malaysia, and Myanmar, hoping to reach Australia's Christmas Island, which is just 220 miles off the southern coast of Indonesia.

Abbott's campaign promise on asylum and immigration was simple and callous: "stop the boats."

Two months after taking office, he launched a program called "Operation Sovereign Borders," which focuses on stopping boats before they reach Australian waters and escorting them back to their point of origin. Often, that job goes to the Australian navy, a decision that has caused controversy because other sovereign nations don't like when navies enter their own sovereign borders.

Asylum-seekers that make it to Australia need to sign a code of behavior. Some asylum-seekers are held at remote detention facilities on other islands."

At the end of March, Abbott celebrated 100 days without a boat successfully reaching Australian land. He did not celebrate the revelation that an asylum-seeker had been killed on Manus Island, allegedly by two Australian security contractors.

9) He opposes his sister's gay marriage

Abbott's sister is gay and when she and her partner married, Abbott said he would "do the right thing" and attend the nuptials but did not support their marriage.

Approximately 160 United Nations member nations agree that Israel should stop building settlements in occupied Palestine. Australia once joined those countries. No longer. Australia and eight other countries abstained from voting on a UN resolution that called for the "prevention of all acts of violence, destruction, harassment and provocation by Israeli settlers, especially against Palestinian civilians and their properties." Australia also abstained from a resolution calling on Israel, as an occupying nation, to comply with the 1949 Geneva Conventions. (The US voted against.)

11) He supports constitutional monarchy and has restored honorific titles

Okay, so this one isn't on par with climate denial, but it's a little weird. For the first time since 1983, Australians can receive the titles of "knight" and "dame." Really?