Conservatives know their days of winning via white resentment are numbered. Here's why their backup plan is doomed 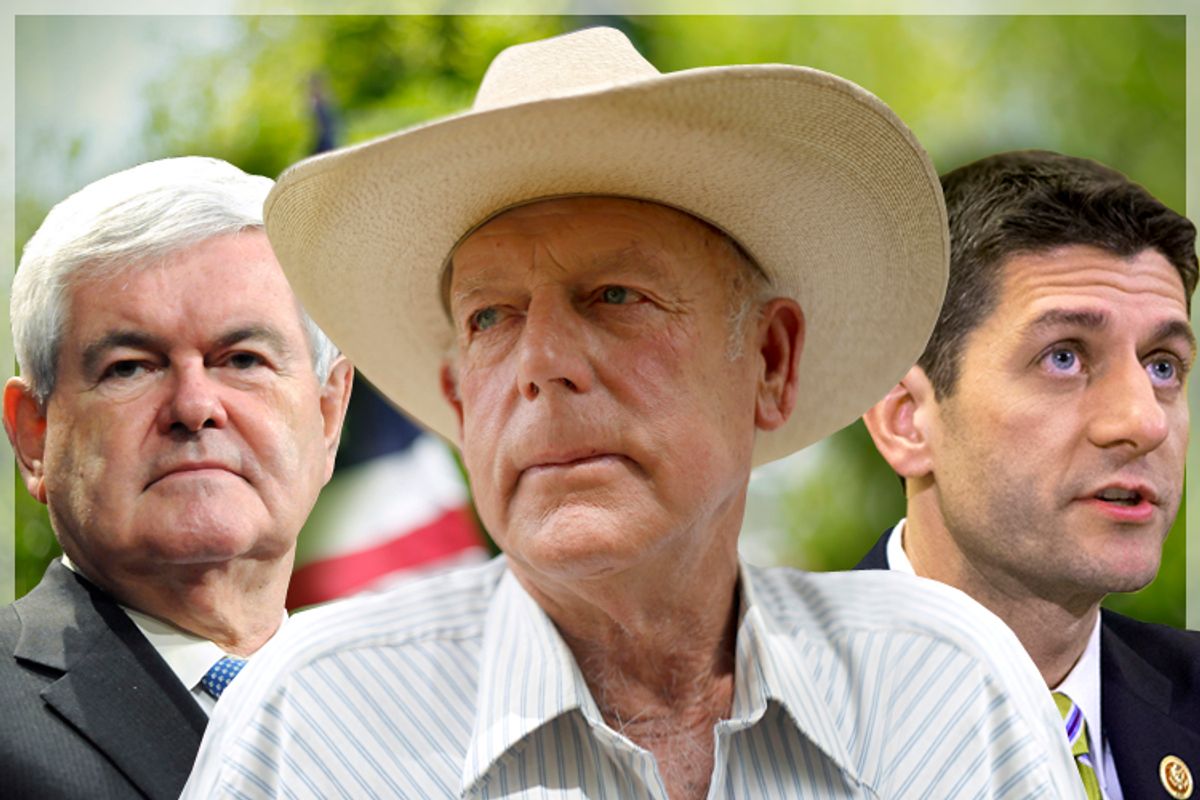 When renegade rancher Cliven Bundy was revealed this week to be very much a racist, most Republicans tried to separate themselves from the man with the kind of speediness and immediacy we don’t often associate with the conservative movement. (Remember, these are the same people who still carp about Benghazi and think every presidential election will be a repeat of 1980.) It was easy to see why: With references to porches, picking cotton and slavery, Bundy’s speech was like a greatest hits compilation of racial taboos. And if any group knows which words you can and cannot say in polite conversation today when talking about black people, it’s the Obama-era GOP. It’s a lesson they’ve learned the hard way.

But for all the earnestness of their attacks on Bundy — Sean Hannity alone called his former favorite rancher’s ideas “beyond repugnant,” “beyond despicable” and “beyond ignorant” — what many conservatives failed to notice is that, at their essence, Bundy’s comments were well within the conservative mainstream. Not the stuff about black people sitting on porches or needing to learn how to pick cotton, but rather the critique of the welfare state as somehow being responsible for the destruction of the African-American family. As others have noted, this line of analysis was just recently endorsed by Paul Ryan, the de facto intellectual leader of the GOP. So Bundy’s only real sin was, as Slate’s Jamelle Bouie correctly wrote, not being “sophisticated enough to couch his nonsense in soundbites and euphemism.”

Perhaps even more uncomfortably for conservatives, it’s not only that Bundy’s vision of the social consequences of redistribution so closely mirrors theirs, it’s also that his way of framing his critique is the same as theirs, too. In his initial remarks as well as those he’s offered since in his own defense, Bundy has tried to engender sympathy by arguing that all he was trying to do is express his deep concern for the plight of black families in the U.S. today. It’s not that he doesn’t think they deserve “his” money, it’s that he worries government assistance will ultimately be detrimental to black people, that it will sap them of their ambition and force them to rely on others for survival. Bundy is worried that the safety net will, as Paul Ryan once put it, “turn … into a hammock that lulls able-bodied people to lives of dependency and complacency.”

I call this move — the adoption of a stance of disingenuous or exaggerated concern for people of color — “racial concern trolling.” And while it’s always been an element of conservatism’s rhetorical repertoire, with the advent of the country’s first black president and the related shift in national politics away from questions of foreign policy and toward arguments over redistribution, it's become increasingly prevalent in the political discourse. Yet as dishonest a tactic as this usually is, I think it actually offers reason for supporters of the redistributive state to be optimistic about the future of racial politics in America.

Before getting into all that, however, let’s define our terms — specifically, “concern troll.” The term originally was used only in particularly argumentative online circles (chat rooms, message boards, etc.) but it eventually permeated the wider culture at large. According to Wikipedia, a concern troll is “a false flag pseudonym created by a user whose actual point of view is opposed to the one that the user claims to hold,” which is pretty much how it’s used in politics, though not exactly the same. For example, while it’s true that concern trolling in political debate involves adopting a point of view opposite from the one you really hold, an act of political concern trolling doesn’t require the creation of a false identity.

The paradigmatic act of concern trolling in politics would go something like this: You’re someone who opposes raising taxes on the wealthy and who supports reducing funding for Social Security. (Let’s call you, oh, I don’t know, how about Third Way?) You notice that Democrats who feel the opposite way, who want to raise taxes and increase funding for Social Security, are winning elections. You worry that this may lead the Democratic Party as a whole to endorse the policies you oppose. So you write an editorial criticizing this approach, but instead of making an argument on the merits, you instead claim that those who disagree with you are courting electoral defeat. You imply that your opposition isn’t about ends but means, even though the truth is anything but.

The dynamics of racial concern trolling are exactly the same. Its proponents, like Paul Ryan or Newt Gingrich or Rand Paul, say their opposition to redistributive programs that disproportionately benefit African-Americans comes from their internal reservoir of affection for black people and their observations that these programs hurt more than they help. But the truth is that their feelings for blacks, however genuine, are not the motivating factor. If you proved, decisively, that they’re wrong, that redistribution often helps the less advantaged have a better chance at making a decent life for themselves, the racial concern trolls wouldn’t suddenly abandon their opposition to economic liberalism. On the contrary, they’d go back to “first principles” and argue that it’s inherently unjust to take money from one person and give it to the other — because that’s what they really care about, that’s what’s actually driving their beliefs.

If we return to Cliven Bundy, we see a perfect example of racial concern trolling (albeit one that was done with far less deftness and tact than is usually the case). In trying to defend his remark about black people (maybe) being better off as slaves, Bundy argued that what he was trying to say is that maybe black people were better off when they all lived in the South “where they had some chickens and the gardens, and they had something to do.” It’s not that he subscribes to the same fundamentally white supremacist ideology of the many militia members and “sovereign citizens” who have rallied to his cause; it’s the chickens, you see. The chickens!

So why should believers in redistribution react to racial concern trolling with optimism? Because, at its heart, racial concern trolling is a tacit admission that the underlying values, the ones that I believe are the racial concern troll’s true inspiration — economic libertarianism, white populism and a belief in a natural social hierarchy — are no longer viable in our pseudo-democracy. Instead of arguing from a platform of values and principles, neither of which can ever be disproven or negated with empiricism or facts, racial concern trolls are reduced to making a technocratic argument. And it’s a rather specious one, at that.

More important, politics is fundamentally about identity, emotion, tribe; these are the powerful psychological and sociological influences that make us bother to stand in line and cast our vote, even when we know it’s just one of countless millions; or send a candidate a check, even when we know we could use that money to buy something diverting or useful instead. Ronald Reagan’s railing against a “strapping young buck” using food stamps to purchase T-bone steaks — that’s the kind of thing that made people mad, that got them fired up. The emotional and motivational power of a Paul Ryan spreadsheet based on fiscal projections for decades into the future is, by comparison, some very weak tea indeed.

All the same, the post-Bundy world heralded by the uptick of concern trolling is not here yet. And it may be decades before it truly arrives. In the meantime, however, people who believe in redistribution and social justice can adopt a strategy that’s served millions of Internet users well for many, many years: Don’t feed the trolls. Call out racial concern trolling for the chicanery it is, then enjoy the view as the Cliven Bundys of this world fade further and further away.