The 10 most overrated albums of the '90s

A highly subjective list of the worst best music of the 1990s, from "Blood Sugar Sex Magic" to "Achtung Baby" 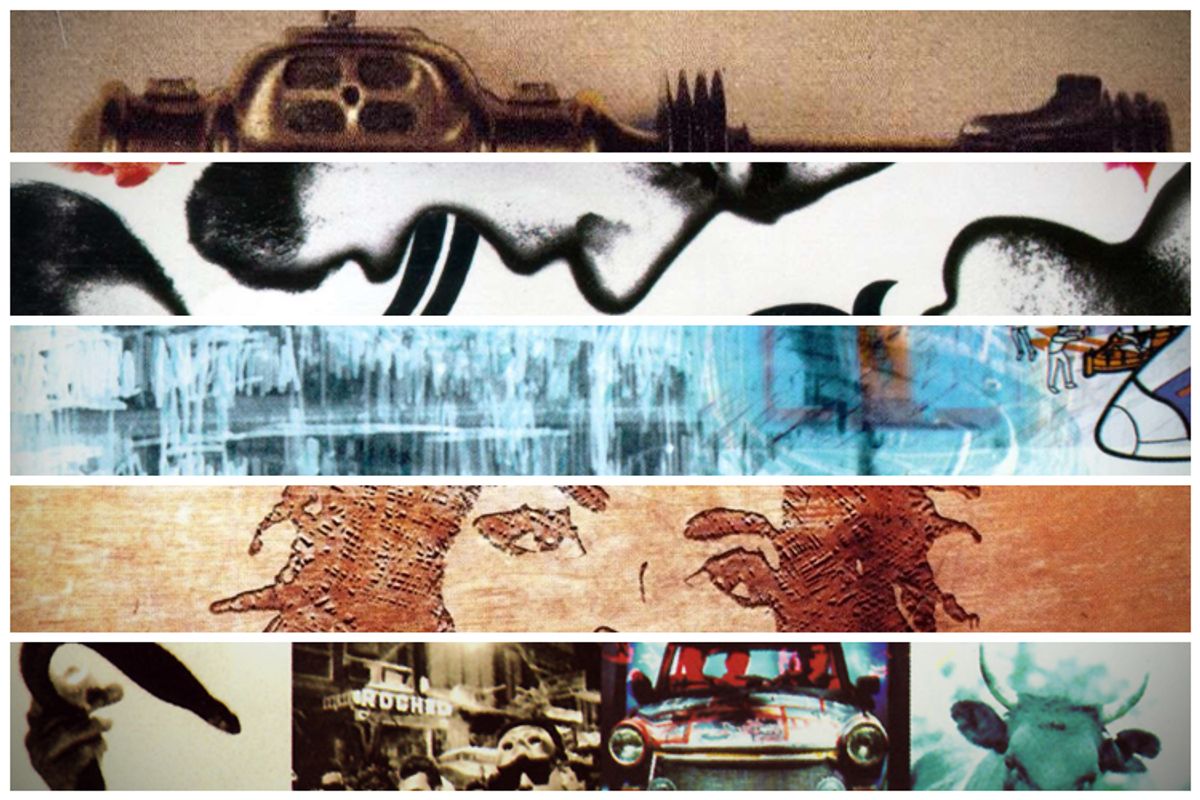 The '90s were two decades ago now, which means they're  clearly ripe for nostalgic veneration. There was some great music back then, needless to say — as well as a lot of music that is now considered indisputably good, but was in fact pretty overrated. And by "in fact," I mean completely subjectively, needless to say. In any event: For the list below, I've tried to pick only albums that I actually dislike, so no "Nevermind," which is not the salvation of rock music, but is still a great album, nor "Illmatic," even though I wouldn't pick it for my top 10 hip-hop albums of the '90s, much less the greatest album ever.

Composed entirely of brief, mostly unrecognizable samples spliced together, the album's virtuoso accomplishment has dazzled many a critic. But come on: "Endtroducing" isn't especially fun to listen to. Mellow to the point of somnolence, it comes across as drearily restrained lounge music, too hip to funk and too cool for cheese. There are certainly pleasant pieces stitched in there, but they mostly serve to emphasize that vivisected bits can seem awfully lifeless if you don't have some soul to animate them.

"Hard or even impossible to place, those melodies, from just below the surface of the American pop tradition or from the true depths of the British folk tradition, float Guthrie's screeds, stories and musings off into a realm where he is freed from his legend — into a realm where the people now singing his songs are freed from respect for it." So Greil Marcus burbled in his usual breathless boomer gush. He and others hailed this album of Woody Guthrie lyrics set to up-to-date alt country as a true-blue folk apotheosis and a worthy tribute to one of the great musical forces of the 20th century. In fact, "Mermaid Avenue" is a smug slog, Bragg's vocals dripping with earnest self-satisfaction at every one of Guthrie's lyrical twists while the band provides charmless default post-Dylan rootsiness. My verdict: an ugly, pompous, generally unnecessary record.

Mainstream reviewers saw this as Metallica's commercial and artistic apotheosis, the moment they jettisoned their thrash excesses and settled in to rock classically. If you wanted to be less charitable, though, you could see the Black Album not as a triumph but as the beginning of a sodden, self-parodic devolution. The breakneck tempos and crazed prog constructions of their amazing early albums with bassist Cliff Burton have been jettisoned in favor of constipated lumbering and James Hetfield's ever-higher-in-the-mix, ever-more-water-buffalo-like emoting. "Enter Sandman" is at least entertaining in its clumsy nursery school freak show — it's cute that they're trying to be as scary as Donovan, even if they can't quite manage it. But "The Unforgiven" is simply egregious pallid fourth-drawer arena-rock balladry. Who on earth wants to hear Metallica prove that they are really crappy at being Journey? There are worse Metallica albums — oh, so much worse — but none that hurt quite as much as this, their first betrayal.

Lauryn Hill brought class, a sense of history, and resolute high-mindedness to '90s hip-hop and R&B. Thus, critics loved her. And, thus also, her signature record is really kind of boring. Her rapping is uneven ("Wisdom is better than silver and gold/I was hopeless now I'm on Hope Road" is maybe the low point), and the R&B tracks follow their unexceptional grooves nowhere in particular. Mariah Carey, TLC, Changing Faces and finally Destiny's Child did much more engaging things with the slow jam and, for that matter, with the ever-closer fusion of hip-hop and R&B, but those folks were all tainted with commerce and didn't reverently reference the doo wop era. Unlike some of the albums on here, "The Miseducation of Lauryn Hill" isn't awful, just blah — but the critical hagiography is so extreme that the album manages to make No. 7 anyway.

A controversial choice, I realize. But perhaps the single most acclaimed record of the '90s, "OK Computer" is bloated with the bigness of big ambitious bigness past, from Beatles psychedelia to Sonic Youth's gritty art punk to spacious Pink Floyd art prog. Above it all, Thom Yorke whines spaciously, a cross between Michael Stipe and a more stentorian Bono, pumping out expansive soaring emotive schmaltz like Celine Dion for alterna-hipsters. "OK Computer" lets you feel twee deeply. It's second-rate shoegaze, but with rock stars.

Strip the intelligence, heart and scummy brutality out of Nirvana, and you're left with this — irritating pop hooks trying to convince you they're tough and doggerel fist-shaking affirmations. "I don't owe you anything!/ I don't owe you anything!" It's like Grohl's deliberately sneering at poor former bandmate Kurt, who I'm sure was puking in his grave. Critics couldn't tell the difference, though — there were guitars, there were hooks, it went soft-loud, soft-loud. It's more of that thing we liked! Cool! Grunge was overhyped and its loud punk protestations of sincerity could be a bit much, but it never deserved this.

"Mysterious Ways" still has a worthy hook that twangs its way out of the echoey Lanois-produced murk, but for the most part this is a remarkably bland record, another anonymous signpost in rock's evolution from rebel yawp to generic AOR wallpaper. "Trying to Throw Your Arms Around the World" and "One" are down there flopping about in the gutter of vague uplift with Bruce Hornsby. U2 was never a great band, but in the '80s they at least had a recognizable semi-distinctive sound. By the '90s, they had nothing except an engorged bank account and the inexplicable adoration of critics and fans. "Mysterious ways" indeed.

One day out there at the crossroads, Lucinda Williams had an epiphany while listening to Bob Dylan. "Hey," she thought. "He can't sing, and he's a genius! If I sing worse than that, I'll be a genius times two!" And so was born her distinctive style, as she shot her mouth full of horse tranquilizer and patterned her phrasing on the random utterances of mildly stunned macaws. Add in high-hat, high-hat, and some schlub hitting the bass drum with his forehead, and hey, you've got an album. It doesn't sound much like country radio, it's loose, it's bluesy. It must be good.

George Clinton and the Minutemen alchemically combined by completely talentless frat rock morons into bone dumb funk punk, minus the funk. As usual, the ballad ("Breaking the Girl") goes above and beyond in its remorseless pursuit of maudlin tuneless shittiness and emo-tough gibberish — "twisting and turning/your feelings are burning" – or is it your bowels from listening to this crap? But then again maybe the uptempo numbers are really worse, since you can almost see the band members and their fans, their faces scrunched up like ecstatic dried apples, just feeling that real bass, man.

Who would have thought that the number 10 could be so interminable? Where Foo Fighters turned grunge into vapidly irritating pop, Pearl Jam set out to make hair metal without the grit or subtlety. Eddie Vedder bellows like a petulant herbivore who wants to be Howlin' Wolf, and the band plods along behind, adding formless would-be gravitas to Hallmark card lyrics like "I know that I'm still alive!" – hey, you know it's deep because it's about daddy issues. Pearl Jam is hard to hate, not through any lack of despicability on their part, but just because listening to them robs you of any strong emotion at all. They are the corporate training exercise of rock: loathsome, endless and enervating.