The New Gilded Age: A bigger con job than the first one 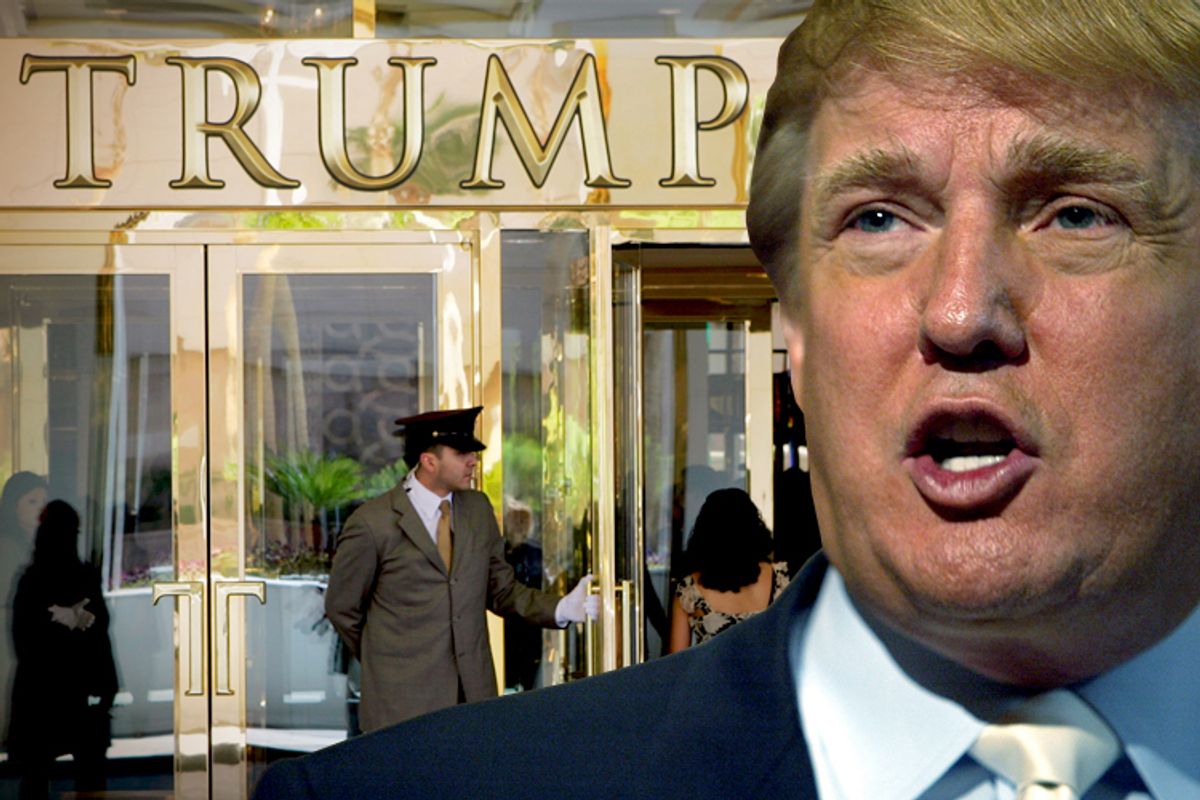 Every time we travel by air, we encounter vivid evidence of what Robert Reich and various others have recently described as the New Gilded Age. The airlines and the supposedly neutral bureaucrats of the TSA don’t even pretend that our society is not divided into economic castes. Coach passengers wait in hour-long security lines and are herded aboard the aircraft in numerically coded clusters, to be ensconced in a tiny, cramped seat and begrudgingly offered a four-ounce cup of Sprite. It’s like a stern reminder that our presence is being suffered rather than encouraged, that our Orbitz or Kayak discount tickets are not what's keeping this failing industry afloat.

Those traveling first class or business, in many contexts, have their own departure lounges, their own lines (very short ones) and their own entrances to the plane. They are whisked aboard ahead of the rest of us, and disappear into an apartheid realm of luxury that is both metaphorical and real. As a fascinating and, to my mind, terrifying New Yorker article by David Owen recently explained, vast resources and immense levels of design, engineering and architectural skill have been devoted to creating these mile-high fantasylands of privilege: Enclosed cabins with double beds, mini-home-theater systems, gourmet meals curated by a chef and sommelier, and so on.

Now, the fact that all this airborne decadence is something of a Potemkin village – you’re still aboard an airplane, in a space smaller than a $39 single at the Motel 6 behind the Conoco station – and that most of the passengers in first class or business are mid-level corporate suits rather than genuine tycoons, tells us something important about the New Gilded Age. It’s pretty much a fake. It’s like a giant game of three-card monte, in which the superrich move just enough money around to make society appear dynamic, to convince many of the rest of us that lives of wealth and luxury await us, just beyond the horizon. The first-class cabin, like the McMansions Thomas Frank recently wrote about, is a vulgar echo of something that once seemed impressive, a promise that is never fulfilled. It’s a reminder that in America we are never to see ourselves as members of an exploited class, but only, in the apocryphal but revealing phrase attributed to John Steinbeck, as temporarily embarrassed millionaires. (What Steinbeck actually wrote has a quite different flavor and meaning.)

Frank’s economic, social and aesthetic history of the big-ass ugly house was great fun to read, but I think he makes a taxonomical error, or at least an oversimplification. The McMansion, at least in its classic mass-produced form – known to real-estate agents as the “five-minute house,” or in the British Isles as the “fuck-me house,” for the exclamation it provokes -- is only the true abode of the bottom half of the 1 percent, people earning roughly $350,000 to $500,000, most of whom go to work every day at salaried jobs. The serious hoarders of capital, the top one-third of 1 percent or so, are a tiny and insulated group who wouldn’t be caught dead in some treeless gated community in the Dallas-Fort Worth exurbs. Their enormous, architect-designed or exquisitely renovated digs in East Hampton and Coral Gables and Jackson Hole and the Provençal countryside are grotesque in a different way and on a grander scale. The suburban McMansion is a pale mockery of that kind of wealth, a simulacrum built of stapled-together sheetrock and extended to the next 2 or 3 percent, the lackeys and maidservants of wealth, with all the sincerity of Lucy holding that football for Charlie Brown. It’s the Monopoly money of real estate.

When I say that the New Gilded Age is a fake, I am not claiming that the worsening economic inequality that Reich and Paul Krugman and others write about so eloquently is not real or does not matter. French economist Thomas Piketty has thrown the ultra-rich and their loyal defenders among the right-wing intelligentsia into a panic with his much-discussed bestseller “Capital in the Twenty-first Century,” which argues in intense, data-rich detail that over the past half-century wealth has stagnated and income gone flat for the vast majority of people in the Western world. Furthermore, Piketty draws an explicit comparison with the first Gilded Age of the late 19th century when he observes that those at the top of the wealth pyramid today generally did not get there on merit, because they worked harder and got better educations and developed brilliant ideas, but because they were born atop big piles of money that got bigger, and because current economic conditions exaggerate the inherent tendency of capital to breed and multiply.

Earlier this week, Krugman and David Brooks both took on the Piketty craze in the same issue of the New York Times, and you get one guess as to which of them was skeptical about Piketty’s proposal for a global wealth tax. (It pains me immensely to say this, but Brooks is probably right when he describes that idea as “utopian.”) At least Brooks appears to have skimmed through Piketty’s book; Megan McArdle of Bloomberg wrote a disastrous post in which she sought to debunk his focus on inequality – meaningful friendships and a good marriage are more important! – while admitting that she hadn’t read the book and wasn’t likely to anytime soon.

I don’t know whether this was some editor’s idea of a joke, but on the same day that Brooks’ and Krugman’s columns were published, and just a day after a front-page story about the American middle class falling behind its cognates in Western Europe and Canada, the Times ran a real estate feature entitled “What You Get for … $2,500,000.” This is not something those of us in the lower 99 percent have much cause to wonder about, but even as pornography the article was unsatisfying: a two-bedroom contemporary in the San Juan Islands of Washington state; a three-bedroom cottage on Narragansett Bay in Rhode Island. Pretty houses in picturesque locations and all, but seriously? Two and a half million clams, and your mother-in-law ends up on the sofa? It felt more like a taunt than a promise: If you happen to come into a quite impressive amount of money, which you probably won’t, you still won’t be able to afford anything close to the Architectural Digest houses that seriously rich people own.

When I say that the New Gilded Age is a fake, I mean that it’s even more of a fake than the first one was. It’s a forgery of a forgery of prosperity. Mark Twain and Charles Dudley Warner came up with the phrase in 1873 to indicate that the economic boom of America’s Industrial Age was covering up severe poverty and widespread social problems. They were right, of course: That boom was built largely on exploited low-wage laborers, especially Italian, Jewish and Polish immigrants packed into urban tenement neighborhoods. Politics of the period were infamously corrupt -- although political participation was extremely high, with some national elections attracting a 90-percent turnout. (It was both a cynical age and an enthusiastic one.) African-Americans in the South were an oppressed and terrorized serf class with no political rights; women could not vote (except in a few Western states) and generally could not earn money or own property independent of their husbands.

But with all that said, the Gilded Age boom actually was a boom, albeit an uneven and highly stratified one. Real wages rose by 60 percent between 1860 and 1890, even with a steady incoming tide of immigration, and by the turn of the 20th century, per-capita income in the U.S. was much higher than in any European country. Railroads, coal mining, steel production and electricity combined to drive economic growth so dramatic that the 20th century could never quite repeat it, except briefly (and deceptively, Piketty argues) in the aftermath of World War II. Enormous fortunes were accumulated by the likes of John D. Rockefeller, Andrew Carnegie and Cornelius Vanderbilt, but as Piketty knows well, the problem of capital congealing and multiplying among a few families at the top of the heap was much more severe in old-money aristocratic Europe.

In other words, for all its abundant flaws the Gilded Age was a period of immense ferment, dynamism and optimism in America, and I can’t imagine anybody, now or in the future, describing our current age that way. That period witnessed the birth and burgeoning of the labor movement and the women’s movement. Public education became widespread for the first time, cities opened the first public hospitals and states founded the great land-grant universities, most of which were meant to be tuition-free forever. Carnegie, who had risen from poverty in Scotland, gave away nearly his entire fortune, endowing libraries, schools and other public institutions all over the country. Even the more prudent Rockefeller gave away $500 million, about half his total wealth. American art and literature blossomed: It was the era of Whitman and Melville, Edith Wharton and Henry James, Mary Cassatt and Winslow Homer.

The gingerbread mansions of the first-wave Gilded Age aristocrats are undeniably vulgar in their way, oversized imitations of European palazzos visited on the Grand Tour, furnished with looted antiquities, black-market Old Masters and the carcasses of endangered species. But they were also built to last, and every middle-sized American city still has a few of them, preserved as museums or municipal showpieces. They stand as bewildering memorials to a blend of avarice, pretension and public-spiritedness that no longer computes in the post-Reagan era, when fringe free-market ideology has become mainstream and any conception of the “good of society” is communistic. Almost our only engine of economic growth, in the new Gilded Age, is that everything is made to be torn down or thrown away. Does anyone think that the prefab glitz of Trump Tower, which looked crappy a month after it was opened, or Derek Jeter’s 30,000-square-foot “English Manor-style” fuck-me house on Tampa Bay, will be around for our grandkids to gawk at? Would you want them to be?

There are unquestionably things to prefer about our own era: Women, people of color and LGBT folk participate more or less fully in our cultural and political life, and the discourse of rights has evolved in directions few 19th-century Americans could have imagined. (Pot is almost legal now -- but opium and cocaine were legal then!) But in economic terms, the first Gilded Age was a period of production and expansion (perhaps unsustainably so), whereas the New Gilded Age is its negative image, a period of contraction and consumption. Instead of Andrew Carnegie founding libraries, we have Donald Trump yelling at people on television like a low-rent parody of the Calvinist God. Instead of rising wages for almost everyone and universal free education, we offer ever cheaper goods made in countries we used to bomb, a mortgage you can’t afford on a house you don’t want in the middle of a former soybean field, and the prospect that one day you’ll get to sit on an airplane in a temporary bubble of pretend wealth – on your boss’s dime! -- drinking Champagne and listening to tinny string-quartet music while the rest of us curse at our kids and cram our oddly shaped packages under the seat.