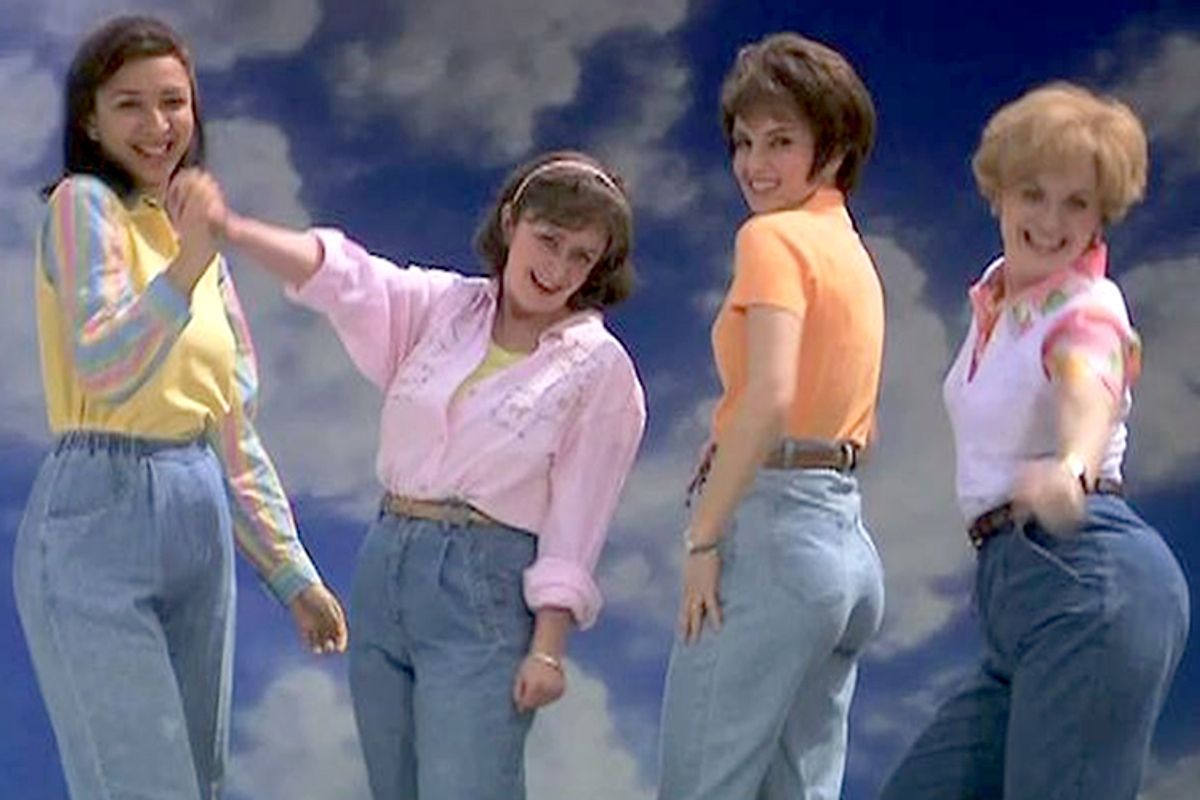 When I first heard about “normcore,” the trend among the privileged toward anti-fashion clothes of the kind available at Wal-Mart, I thought immediately of a passage in F. Scott Fitzgerald’s unfinished novel, "The Last Tycoon," describing the plans that various wealthy Hollywood types made back in 1932 to survive the revolution they believed was coming. One film director, Fitzgerald writes, intended to ride out the wave of public anger by adopting a sort of normcore avant la lettre: “He had an old suit, shirt and shoes in waiting—he never did say whether they were his own or whether he got them from the prop department—and he was going to Disappear into the Crowd.”

This seemed relevant, given the economic circumstances surrounding the normcore trend—the One Percent, the Financial Crisis, the withering of the middle class, and all that. But on second thought, a better analogy might be found a few centuries farther back, when Marie Antoinette and her friends used to dress up as shepherds in order to pantomime the uncomplicated spiritualism of the lower orders.

The normcore manifesto, if we want to call it that, is a PDF document entitled “Youth Mode: A Report on Freedom”; it was released on the Internet a while back by a semi-satirical trend forecasting group called “K-Hole.” On its surface it looks like a Tom Peters business book from the 1990s, with lots of stock photos and puzzling aphorisms about Who We Are Today, or maybe one of those mass-market paperbacks from the late '60s that were filled with huge-type declarations and different stock photos, like Marshall McLuhan’s "The Medium is the Massage."

The platitudes K-Hole lays down are familiar to anyone who has followed the corporate-management / youth-rebellion industry for very long: Things are said to be changing ever so fast. Being yourself is difficult. Kids are confused by all the packaged identities they are encouraged to choose from, which are distinguished only by tiny details. Yet these noble kids persist. They “demand emancipation” from the usual things: “from boredom, from prescription, from tradition.” Where is the freedom-minded rebel to turn?

So far, so predictable. But then, instead of proposing some new combination of rebel signifiers, the normcore manifesto announces that the kids are saying to hell with it all. “Thus the cargo shorts,” it declares: the kids would rather wear the blah average than try to keep up with an impossibly fragmented youth scene.

The subject here is not the youth of America generally, but a very specific subset—the clued-in “überelites,” the “truly cool,” the jeunesse dorée who are the marketing world’s No. 1 target. The manifesto goes on to describe their taste for the blah with a kind of theoretical double-talk (“Normcore capitalizes on the possibility of misinterpretation as an opportunity for connection — not as a threat to authenticity”) that resembles the stock-in-trade of branding agencies, management consultants and other bamboozlers of clients.

Of course the concept has been an enormous hit; how can it miss? Everyone hates hipsters, and there’s nothing more fascinating than watching them dialectick themselves into a corner in this manner, convince themselves through complex pseudo-reasoning that they aren’t cool after all. It’s like watching the Amish persuade themselves to embrace jet travel.

Better: the fashionable people of the world seem to have decided that the rest of us had better taste than them all along. It is an irresistible media meme, and it has triggered hundreds of anxious trend stories. We can only await with eagerness the second wave of journalism on the subject, which will no doubt tell how hipsters are joining evangelical churches—hipsters are learning upper-midwest accents—hipsters have discovered Wenatchee and are moving there en masse.

You could, if you really wanted, read the original normcore manifesto as a kind of satire of luxury marketing and lifestyle journalism. These industries themselves, however, stand far beyond mockery’s reach. As the countless news stories on normcore reveal, they have already embraced the trend as though it were the realest thing in the world.

What’s great about the taste-world’s sudden passion for normalcy is the way it all reveals in gaudy Technicolor contrast what an utterly bankrupt and fraudulent enterprise it is. These are industries, after all, that are organized around an aristocracy of the tasteful in which we squares exist only to be mocked and shunned—an aristocracy they insist on trying to preserve even as they prostrate themselves before the altar of squaredom.

Consider, for example, the fact that we’re hearing about normcore at all. It is not news to observe that average people wear clothes from JCPenney; it only becomes a news story, beguiling the taste-gurus of the entire world, when special people are moved to wear clothes from JCPenney—enlightened people, adventuresome people, people with the right cheekbones and the correct socioeconomic status. Articles describing the wonders of normcore often use phrases like tourist or middle American in their usual way—to denote the clueless lamestain who represents the opposite of taste—even as they describe how awesome it is that our subversive culture-heroes are now partial to “tourist” or “middle American” looks.

Okay, but how are we supposed to tell them apart? What is the difference between the tourist and the normcore tourist-clone? The answer, to read the normcore literature, seems to be that there is no difference at all except that one of them is To Be Admired and one of them is To Be Mocked, the distinction residing entirely in the say-so of the taste-gurus themselves.

What we have, in other words, is the whole taste-leader industry stripped naked, down to one last remaining figleaf—its claims to professional expertise, now obviously based on nothing except for the corroboration of other so-called experts.

Slumming has a long history and it’s easy to find antecedents for this curious new turn in sartorial taste. But the most obvious and most disturbing predecessor for this fake reverence for middle America is modern-day conservatism and its decades-long effort to recast a party of billionaires and businessmen as a party of average people in casual clothes who can’t possibly do you any harm: Republican normcore.

But fake populism is the native tongue of all politicians, you might object. People running for office always attend parades and join the Rotary Club and dress in plain blue suits and vivid red ties. It’s just what they do.

True, but our modern day conservatives have gone much farther than that. They have established a kind of cult of the middle American, siding with him as he makes his stand against the snobbish and fashionable liberals who besiege him. This is what the whole fatuous theory of the noble “Red State” was originally about: Honest, hard-working, and above all humble people versus the elites that supposedly detested them. And so: Lattes and Volvos and sushi were set up in preposterous fake antagonism against country music and NASCAR and Our Lord Jesus Christ. In 2005, the conservative pundit Michael Barone boiled it down to this: politics was a conflict between the “common people” and the “people of fashion,” a group which, he implied, included yours truly.

The Tea Party movement, when it finally arrived, was a normcore triumph. Its purpose was to buttress the power of the powerful, but it went about it with manifestos calling upon the “Country Class” to unseat the snobbish “Ruling Class,” with books bemoaning the liberal persecution of “normal” people, and with groups bearing names such as “Regular Folks United.”

And then there’s the clothes. Mitt Romney, ordinarily a sartorially polished man of means, took pains to wear jeans on the campaign trail because a focus group once suggested it would play better with voters. Think of Glenn Beck in his Converse sneakers, Joe the Plumber in his Carhartt jacket, Tito the Builder in his hardhat, Rick Santorum in his sweatervest. (Or, on the other hand, Sarah Palin and the $150,000 wardrobe in which she campaigned for the vice presidency, which proved so troublesome for Republican populism.)

Normcore resonates despite all this because it points to an obvious but unspoken fact of our time: That coolness itself is done. The reason we hate hipsters is because they are so obviously irrelevant. Hipness has exceeded its shelf life. It is ready for its vitrine at the Brooklyn Museum.

Maybe this will become more obvious as we commemorate the fiftieth anniversary of various events of the 1960s and as we remember the social and political conditions that gave rise to the counterculture in the first place: A mass middle class whose lockstep consumption drove the economic growth of the nation; a rigidly hierarchical white-collar workplace that offered security in exchange for conformity.

None of this exists any longer. The mass middle class is disappearing fast and the old corporate model has been dead for decades. Defying either one is objectively pointless, like rebelling against the gold standard or barbershop quartets.

The urgent need of our age is not individual self-actualization or even a really innovative artisanal cocktail; it is to hold on to that middle-class society the counterculture thought was so soulless and unfulfilling. All the signifiers have changed. Today corporate managers routinely declare themselves to be disruptive and revolutionary fellows, while average, uncool workers fight desperately to hang on to their pensions and healthcare benefits. The symbolic poles of our world have been completely reversed, and it is time we recognized it: flat-accented Wisconsinites and dowdy suburban moms and mulleted union guys, all of them watching their world fall apart, often show a kind of bravery these days that is far more transgressive than anything you will see at Fashion Week this year. Or ever.