Chris Hayes: Thomas Piketty is misunderstood, and the climate crisis is worse than you think

The MSNBC star talks with Salon about the fight to save the planet, income inequality, Thomas Piketty and more 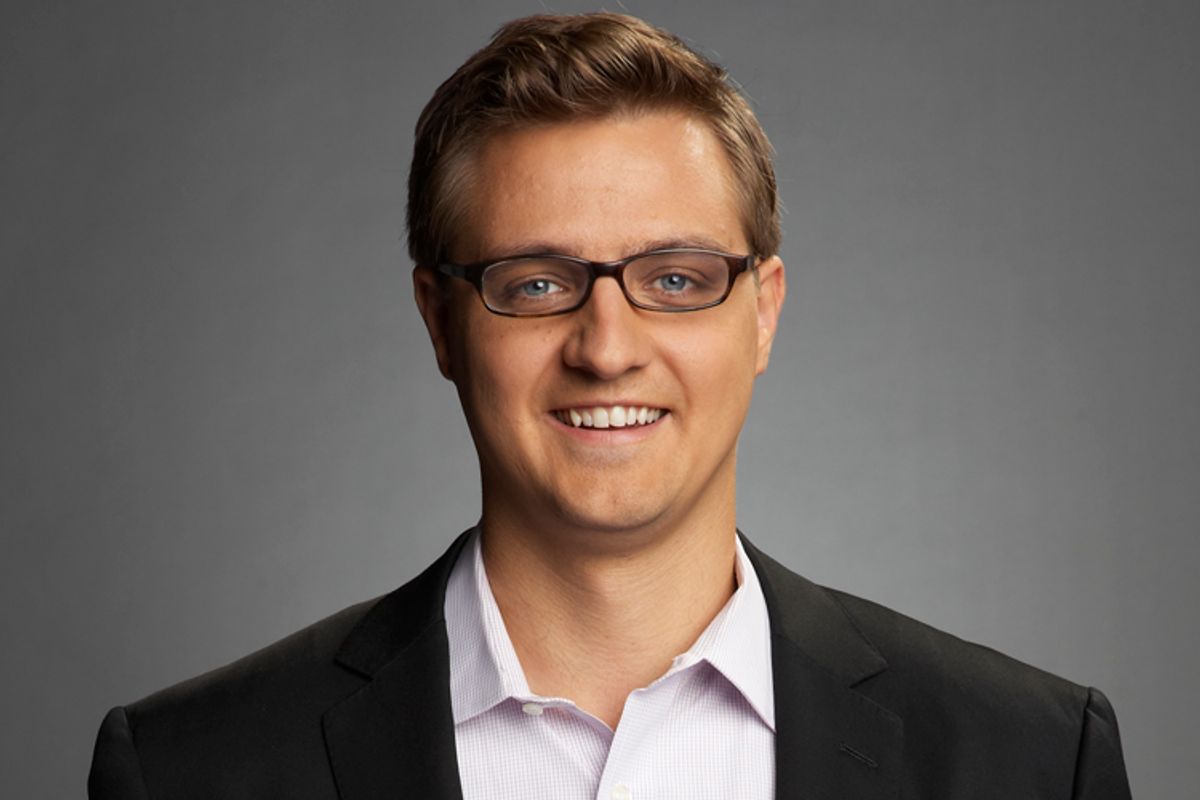 In "The New Abolitionism," his latest essay for the Nation, MSNBC host and Nation editor-at-large Chris Hayes presents a new way to view the climate crisis that is intriguing and terrifying in equal measure.

Drawing off of an earlier essay written by climate activist and expert Bill McKibben — as well as the work of the Carbon Tracker Initiative — Hayes notes that the total amount of carbon in the proven fossil fuel reserves of the world's energy corporations and fossil fuel-producing countries (2,795 gigatons) vastly exceeds the amount scientists say we can release into our atmosphere by the middle of this century before risking catastrophic climate change (565 gigatons). And what makes this disparity even more alarming is the fact that these carbon reserves are worth an estimated $20 trillion. If we're going to save the planet, in other words, then a lot of powerful interests in the energy sector will have to leave a lot of money on the table.

Taking into consideration the enormous amount of wealth that will have to be nullified if climate activists are to achieve their goal, Hayes draws an intriguing parallel between the modern divestment movement and the abolitionist movement of the 19th century. While he makes pains to emphasize that he doesn't see people in the energy industry as morally equivalent to slaveholders, Hayes argues that the only precedent in American history of a political group relinquishing so much wealth is the emancipation of the South's slaves in the 1860s — an achievement that was reached in part through a hideous Civil War.

Thoroughly frightened, Salon called up Hayes last week to discuss his column as well as the Keystone XL pipeline and the climate justice movement in general. We also touched on the groundbreaking work of French economist Thomas Piketty, explored the relationship between economic inequality and the destruction of the Earth's climate, and wondered if Piketty's findings could pose uncomfortable questions for not just conservatives but liberals, too.

A lightly edited and condensed version of our conversation follows.

What inspired you to make a connection between the abolitionist movement of the antebellum period and the push for climate justice today?

It all started with the Bill McKibben piece in Rolling Stone in 2012, which was an incredible piece that just laid out this basic set of numbers [from] which you realize we actually have a lot more fossil fuel — a lot, lot, lot more fossil fuel in the ground, known and tabulated — than we can burn safely. So then I started thinking, how much is that worth? And I started looking up estimates, and when I got to the number ($10 trillion), I was sort of like, this is crazy; I can’t think of an example where there was a successful political project that was making the demand that ultimately has to be made here, except [the abolitionist movement.]

Then I think I read a Ta-Nehisi [Coates] post that had the Roger Ransom graph of sort of average sale prices of slaves. I'd thought about the economics of slavery, but [not] the deep economics, the deep sense that there was capital, this wealth, that was being essentially expropriated [via emancipation]. Because, obviously, we don’t think about it in those terms — as we shouldn’t, because it was never right to think about it in those terms. So then I got really into ... a lot of reading of Civil War history, or antebellum South history — about the cotton boom, particularly — and just how transformative and how lucrative it was, and how much it managed to, in some ways ... transform even the kind of rhetoric around slavery ... through this kind of mechanism by which people kept getting more and more defensive about this thing that was making them a lot of money.

I saw a couple of stories recently that reminded me of your argument on this point. There was a debate in North Carolina with the Republican candidates for Senate, and they were all asked if they believed in global warming. All of them said no. Do you imagine that, going forward, this kind of strident climate denialism is just the way it’s going to be in American politics in terms of how conservatives and Republicans talk — or in some cases don’t talk — about climate change?

I don’t know. I think something will change. I think ... one of the key differences here, and one of the points that Ta-Nehisi and others have made, is that, basically, Lincoln wanted to try to find a way to do some sort of compensated emancipation, and the South told him to go F himself. Because at that point, [the South] was like, "We don’t want your money; we want our slaves." They were past being bought-off-able in a way that I don’t think the fossil fuel companies are.

Why don't you think they're at that point?

Because I think they’re less ideological … The fossil fuel companies as entities are less ideological than the planter class of the South. The planter class was deeply driven by genuine hatred, white supremacy, cultural factors ... all sorts of things kept them tied to slavery that I think don’t apply in the case of the fossil fuel companies. The point of that section of the essay, though, is to say that in some ways the conservative base and the right have become more cultural and cultish about the issue than the fossil fuel companies themselves. Rex Tillerson of Exxon says carbon emissions lead to climate change, which is warming the planet, which is just gonna happen. Even Rex Tillerson of Exxon. As Steve Coll chronicles in his great book on Exxon, there are units at Exxon working on how climate change is going to help them get more fossil fuel out of the Arctic.

I actually saw that move by Exxon as a kind of manifestation of ideology — the profit motive.

It is a suicide mission, like I write. And when you think about this $1.8 billion [the industry's] spending per-day on exploration, when we can only burn by mid-century 20 percent of what we have, that is ideological.

Right now, there’s a debate going on between the center-left and left over the Keystone XL pipeline and whether the environmentalist movement should place so much emphasis on stopping it. What's your take on the wisdom of using Keystone as a rallying point?

I think the concern trolling is pretty ridiculous. The problem with the [climate crisis] issue is that it’s abstract, right? You can’t organize around abstractions ... Blocking Keystone is right on the merits. It is something the president has in his power; he can’t say, "Well, the Republicans in Congress won’t let me," so there is leverage. And it is something concrete you can organize around. This idea that this is somehow stealing [momentum] from a broad-based movement to push a carbon tax through a filibuster in the frickin' Senate, and a House filled with Republicans? Through what? What are you stealing from?

All I see is building capacity for a political movement that is getting stronger with every new student and activist it recruits, every email it adds to its list, every protest it stages where people are brought into the movement and understand better the issues ... It’s the best organizing [being] done on the issue, so to come and be like, "Well, no, it’s really not that important" — first of all, it is. But also, it’s just a fundamental category error, a misunderstanding of what organizing is, which is not surprising because in the same way that I don’t think if you just went up to a field organizer he'd produce good copy, Jonathan Chait is terrible at giving people organizing advice.

I think it’s both. It’s interesting to me that you need an alliance of interests here ... When I was at the "Years of Living Dangerously" event the other night, there were a few guys who work in Indonesia to stop deforestation, who are kind of like on-the-ground deforestation activists. There were some 350.org people, there were some mainline Sierra Club types, and there were a bunch of guys who were emerging alternative-energy finance dudes who have solar funds, hedge funds and start-ups. And all those people have different worldviews and different politics, but you need that alliance of interests. You’re gonna need it at every level. You need agitation on the grass-roots level, you do need convergent agitation among elites, you need to use the levers of power you have in investment, in boardrooms. You need to build up non-carbon emitting incumbents that take on power. You kind of need all of that working in concert.

Shifting topics slightly, I saw your interview with Piketty, and I was wondering: Is there a way that the left can think about Piketty's findings and think about climate change and put the two together?

Certainly. There’s actually an amazing book called "Carbon Democracy" that makes a parallel argument to this ... that concentrated power in the sense of electricity and combustible fuel is not unrelated to concentrated power in the sense of political power, and is not unrelated to concentrated capital wealth. Those things are all related, and something has to happen to our power system that radically deconcentrates it ... This century, if we’re going to figure this out and get through all of this relatively intact, we’re going to have to have an energy production and consumption system that is far more [equally] distributed than what we have right now ... The original monopoly was, of course, Standard Oil — and that wasn’t an accident. Breaking that up is the mission across a variety of venues.

You said on Twitter recently that you’re a little depressed (but not surprised) by how the partisan conversation over Piketty's book has played out, and that there are ways in which Piketty's conclusions are more complicated than some people on the left may understand. What did you mean?

Here’s the place where Piketty poses problems for a certain kind of vision of the left. I’ve had the following one-two jab with conservatives and neoliberals ... they say, "All this inequality, it’s sort of necessary in this competitive environment and in globalization, and fueled by technological change, and higher incidence of performance pay" yada, yada, yada. And then you say, "Well, that’s not true that it’s necessary for growth; the periods we have of the best sustained growth were actually periods where the economy looked very different — higher union density, higher government involvement in the economy, middle-class boom," etc. And they basically say, "Yes, but that was a very special circumstance. The postwar bounty that was able to be shared in this way is a product of a highly anomalous growth period that’s not coming back."

Piketty is bolstering that point. Piketty is saying the "high levels of inequality are necessary for growth" argument is bullshit and not borne out historically in any way, but also that les trente glorieuses was just a really highly anomalous period and it's very difficult to conceive of how you would re-create it. And so, as a model for a 21st century left ... what does our model of that in a low-growth regime look like? I think [the left's] standard go-to thing is like, "Look, we’ve got this historical example in our recent memory where we had this economy that was f-ed up in a lot of ways, we had Jim Crow, segregation ... but the balance of labor/capital share was much better." Piketty's point is, "Yeah, things were growing really well, because it’s a lot easier under conditions of high growth to split stuff up than under conditions of low growth."