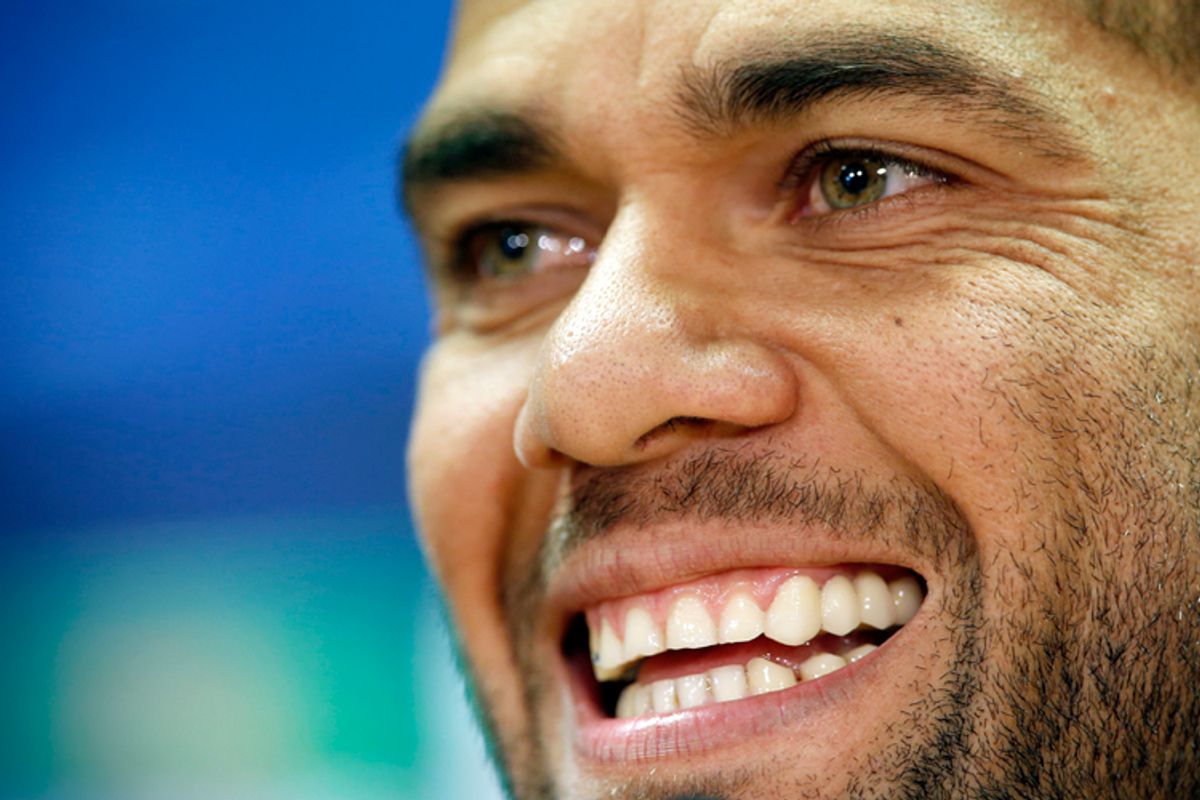 It wasn't the first time he'd been taunted like that. Daniel Alves, the Brazilian footballer who plays for Barcelona, has endured this particular form of racist abuse from fans before. But this time he impulsively did something about it. And it was brilliant.

In the midst of a Sunday match in Villarreal, someone tossed a banana onto the pitch and at the player. Unfazed, Alves smoothly picked it up, peeled it, took a hearty bite – and then took his kick. Barcelona, by the way, went on to win the game 3–2. After the game, Alves asked, "Who threw the banana? I don't know but I want to thank them because it gave me the energy to make two more crosses that ended up in a goal." And on Instagram, football star Neymar showed support by posting a photo of himself with a banana and his son with a toy version of the fruit, along with the message, "We are all monkeys, we are all the same. It’s time for people to say enough. Take a pic while eating a banana. Say no to Racism!"

Alves' cool response no doubt comes from years of hard-won experience. In 2011, he called the racism of Spanish fans "uncontrollable." When, during a match in 2012, fans at the Cornella-El Prat stadium tried to ruffle him by monkey noises, Alves later dismissed the tactic by saying he didn't hear them. But last year, when no one from either team spoke out about the noise-making after a similar incident at another game, he called for "drastic measures," saying, "I did not think about leaving the pitch, but it bothers me. I go through this constantly in all the grounds I go to. It is a shame ... I have been in Spain for 10 years and it has happened since the first day." He added that "Until action is taken, nothing will be fixed. Punish the club and the team. But not with fines of €1,000 or €2,000. You must go much further."

The bigoted response to Alves arrived the same weekend that here in the U.S., Clippers owner Donald Sterling came under heavy fire after audio allegedly of him making offensive remarks about "associating with black people." In different ways, both stories reveal a particularly insidious type of racism – a contempt filtered through a perverse admiration, and a warped vision of dark-skinned athletes as somehow physically superior but socially inferior.

In his pointed, graceful reaction to being treated as less than human by the idiot banana tosser, Alves deftly showed the haters who the true losers are. He made an articulate, clear point – in much the same lighthearted way actress Gabourey Sidibe did earlier this year after she got trolled at the Golden Globes. When people come at you with ignorance, sometimes the most devastating thing you can do is not match their level of bitterness, but reveal how absurd they are. After the match, Alves, who has called the cause of fighting fan racism "a lost war," said, "We have suffered this in Spain for some time. You have to take it with a dose of humor. We aren't going to change things easily. If you don't give it importance, they don't achieve their objective." He acknowledged the mockery – and then he kicked it hard. He showed strength and humor and what happens when you put your energy toward doing things instead of tearing people down. In other words, GOOOOOOAAAAAALLLL. That's not just how you win a game. That's how you win, period.