Donald Sterling’s racial views are worse than Cliven Bundy’s, yet some on the right defend the racist billionaire 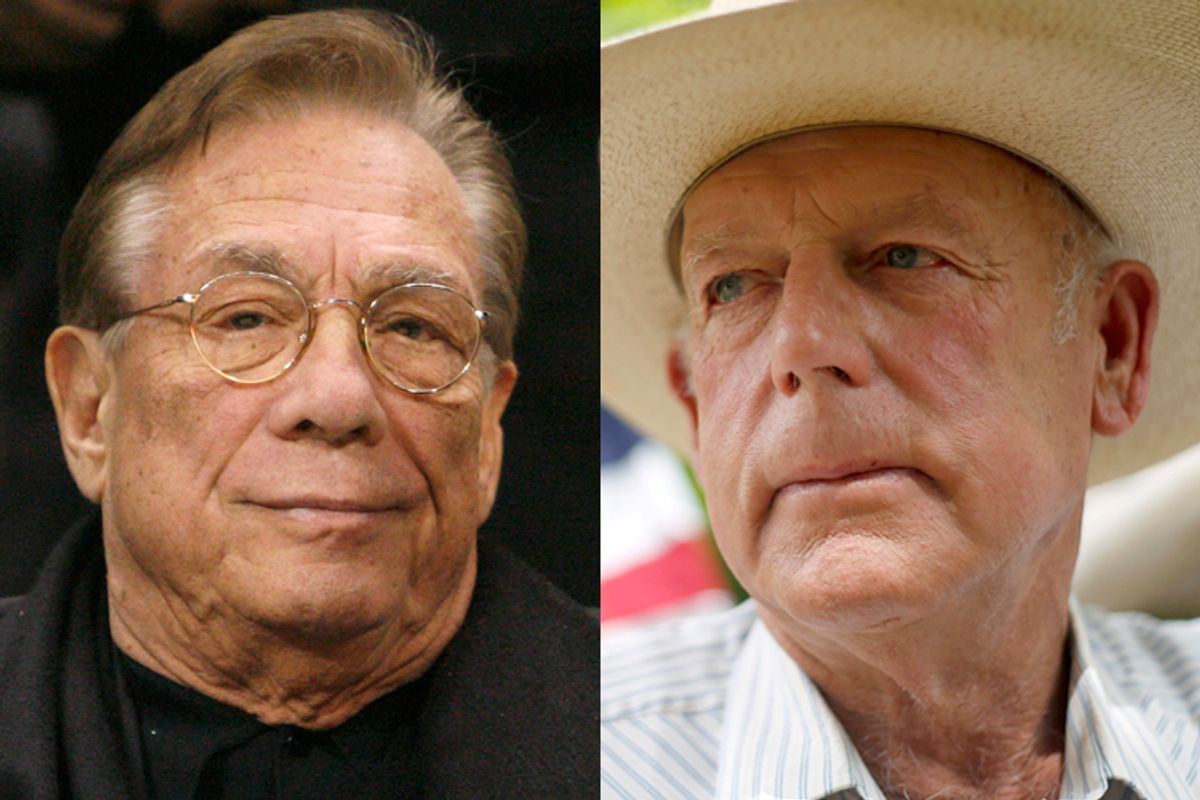 Chief Justice John Roberts has to wonder if the universe is talking back to him after the Supreme Court last week struck down affirmative action in Michigan, relying on his fatuous 2007 declaration that “The way to stop discrimination on the basis of race is to stop discriminating on the basis of race.” Just to prove racism is still with us, we had Cliven Bundy pop off about lazy black people being better off under slavery, and (even worse in my opinion) the filthy-rich owner of an NBA team berating his black girlfriend on tape for bringing black people to his basketball games, where mostly black players make him even wealthier several times a week.

Bundy, 67, is a hardscrabble rancher who’d never have had a public platform without wealthy hucksters at Fox News. The 80-year-old Donald Sterling, by contrast, owns a basketball team valued at over $500 million and a real estate empire where he’s had to settle for millions of dollars in race discrimination cases. He’s given money to politicians (mostly Democrats, the right will have you know) and was about to receive a poorly timed award from the NAACP.

It’s just another episode of “Angry Old White Men Gone Wild,” but the two men’s sins aren’t the same. Racism wasn’t entirely shocking coming from the not-too-sharp Nevada cattleman who seems to have marinated in the paranoid anti-government thinking that’s taken hold in marginal white communities. Its crude expression was much more disturbing coming from the powerful, wealthy Sterling.

But there’s more than simple anti-black racism linking the views of Bundy and Sterling. They share an ignorant, self-serving paternalism.

On the tape first acquired by TMZ, before Deadspin published a longer version, we hear Sterling ordering his now ex-girlfriend to stop posting photos of herself with black men on Instagram, and to stop bringing black people to games, including Magic Johnson. Although Stiviano is black and Mexican, it's not always clear Sterling knows this; at one point he calls her "a delicate white or a delicate Latina girl." She replies, "I'm mixed," but fails to clarify the mixture.

At times you feel a little bit sorry for Stiviano, as she tries to reason with Sterling, calling him “honey” and bringing him juice. (Still, as she talks to him like he's a testy child, it's clear she's using this unethical racist for one thing, and it's clearly not his looks or his character.) Stiviano suggests Sterling can’t really object to her being seen with Los Angeles Dodgers star Matt Kemp; after all, Kemp is half white.  “He’s lighter and whiter than me,” she reasons. “I met his mother.” Sterling is not convinced.

Occasionally she seems to get fed up with trying to parse what is just plain racism. She asks, “Do you know that you have a whole team that's black, that plays for you?” Sterling blows up:

Do I know? I support them and give them food, and clothes, and cars, and houses. Who gives it to them? Does someone else give it to them? Do I know that I have—Who makes the game? Do I make the game, or do they make the game? Is there 30 owners, that created the league?

That’s a philosophical question for NBA commissioner Adam Silver to ponder as he decides what to do with Sterling? Are the 30 owners all-powerful? Do they "make the game"? Or do the majority-black players whose families aren’t welcome in Staples Center under Sterling have some rights, too?

Comparing the situation of Sterling’s players -- talented, wealthy athletes with agents and contracts – to slavery is silly. Still, a twisted and racist paternalism links Cliven Bundy’s slavery rant with Sterling’s talk about his players. “I give them food, and clothes, and cars, and houses” is only a few bad leaps of logic away from slavery being good for black people because it gave them “homes with their chickens and their gardens and their children around them, and their man having something to do.” In both cases, black people are simple, passive and not entirely capable of caring for themselves. They should be grateful for the good will of the men who exploit their labor and accept their position at the bottom of society, because they’re not meant for more than that.

Of course I’d say it’s the players who give Sterling food, and clothes, and cars, and houses. Without their labor, their talent and their extraordinary dedication to do everything it takes to win, Donald Sterling wouldn’t have a basketball team. Now, he’d still have food and clothes and cars and houses, because he’s a predatory real estate mogul who paid $2.725 million to settle a Justice Department suit that accused him of driving African-Americans, Latinos and families with children out of his apartment complexes.

Finally, there's one more difference between the Bundy and Sterling situation. Where Cliven Bundy’s supporters scurried when he made his racist rants, Sterling has attracted some powerful defenders. Always-wrong Bill Kristol says we’re making too much of Sterling’s remarks. “Everyone goes hysterical over two or three sentences,” Kristol went on to say. “Private organizations can deal with, private businesses can fire people, I suppose.” Is Kristol suggesting private business owner Sterling can fire his team’s black fans? Or his mistress?

Birther buffoon Donald Trump blames the mistress. “He got set up by a very, very bad girlfriend, let’s face it,” Trump told Fox and Friends. “She’s called the ‘girlfriend from hell.’ She was baiting him and she’s terrible.” On Powerline, John Hinderaker goes all the way in taking the blame to Stiviano, claiming that it’s clear the mistress was sleeping with black players and "someone must have teased him about his mistress consorting with blacks."  Thus Sterling’s remarks weren’t racist -- he can't be racist since he employs black players! -- but the complaints of a sexually insecure man, and who among us, on the right, could blame him, he seems to say.

On Sunday night, there was something very moving about watching the Clippers take the court together in Oakland, all of them, black and white, wearing their warm-up jerseys inside out, like a flag upside down in distress, the team’s logo hidden. They left their jerseys on the court and walked away. Adam Silver can’t do that with the mess Sterling made.