Sterling and Bundy aren't vestiges of another time. They are the embodiment of Paul Ryan & Michele Bachmann's ideas 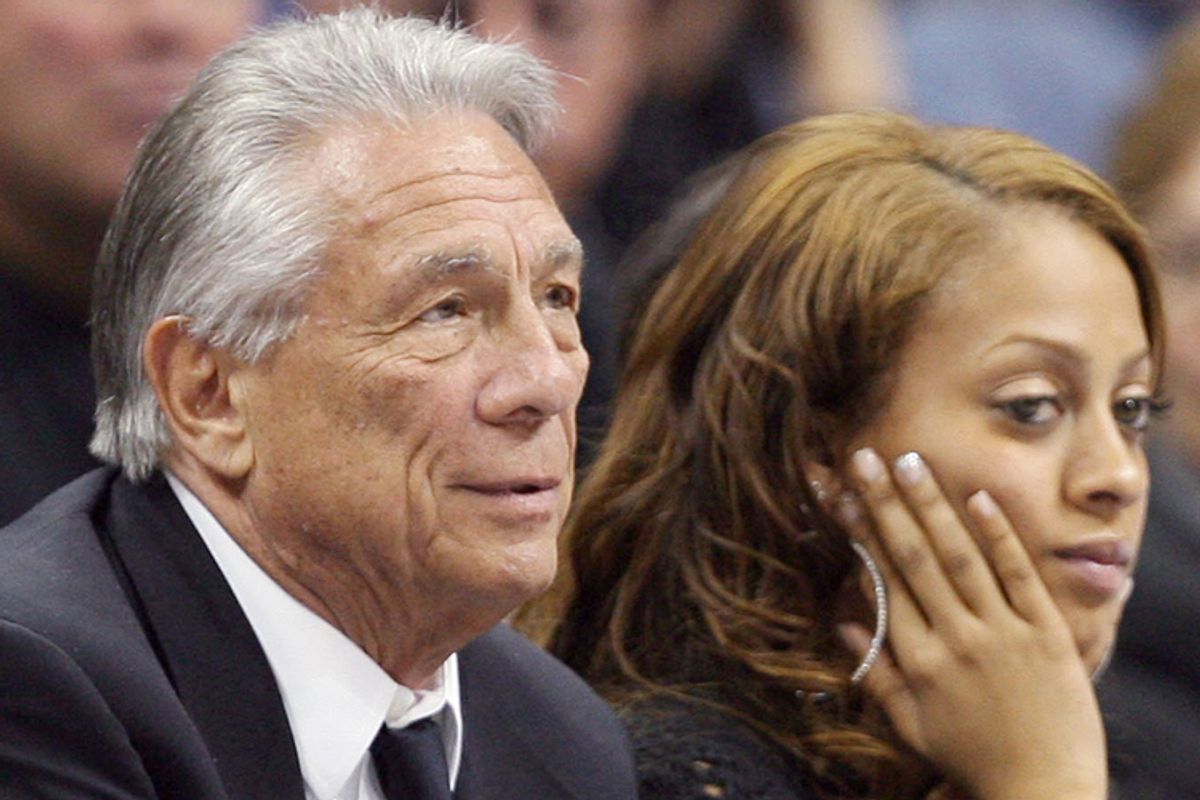 During a recent soccer match between Barcelona and Villarreal, a fan threw a banana at Barcelona player Dani Alves as he was about to take a corner kick. Instead of getting upset, Alves, who is Brazilian, calmly picked up the banana, took a bite of it and took his kick.

In much the same way that Alves treated the fan’s bigoted act as a gift, we can consider the antics this past week of Nevada rancher Cliven Bundy and Los Angeles Clippers owner Donald Sterling as gifts and opportunities to accept Supreme Court Justice Sonia Sotomayor’s invitation in her dissent in Schuette v. Bamn -- to “speak openly and candidly on the subject of race.”

Bundy’s ramblings about “the Negro,” and Sterling’s insecurity about his mixed-race girlfriend posting pictures on Instagram of herself with black people, provide insight into what Sterling referred to as the “culture” of racial discrimination that persists in our society.  Bundy and Sterling exemplify why all Americans need to openly and honestly discuss race, the retrenchment of laws guaranteeing equal protection and protecting civil rights, and the resurgence of white supremacy that has grown even more acute since the 2008 election of President Barack Obama.

It would be easy, as many undoubtedly will, to dismiss Bundy and Sterling as anachronisms – as throwbacks to a time when racism was accepted and Jim Crow was the law of much of the land. To some, Cliven Bundy may be just a crazy old rancher spouting nonsense. Former Bundy supporters like Sean Hannity quickly distanced themselves from his remarks, and Republican National Committee communications director Sean Spicer took pains to note that Bundy does not represent the GOP.

But Bundy’s remarks about the good ol' days of slavery, when black families were intact and raising chickens and tending gardens, are similar to the rhetoric espoused by a “marriage pledge” signed by former GOP presidential candidate Michele Bachmann – a pledge claiming ”a child born into slavery in 1860 was more likely to be raised by his mother and father in a two-parent household than was an African-American baby born after the election of the USA’s first African-American President.”

Bundy’s comments about black men sitting idle also echoed recent comments made by Republican congressman Paul Ryan, who decried the lack of work ethic among “inner city” men. While Bundy may not be a GOP spokesman, he is pretty good at repeating conservative talking points.

For his part, Donald Sterling is not only the owner of the Clippers, he is also a real estate mogul who has faced numerous lawsuits alleging that he discriminated against blacks and Hispanics who sought to rent his apartment units. He is not simply a harmless old bigot speaking nonsense in the heat of a lovers’ quarrel with his much-younger mistress. Sterling’s well-documented racism was largely ignored by the NBA and the mainstream media for years. Now, people profess to be “outraged” by his views.

The media circus surrounding Bundy and Sterling exemplifies why the nature of our discourse about race and racism must change. Although it has traditionally been easier for the media to focus on individual racist acts instead of systemic white supremacy, it is far less useful to focus on individual racist acts, and far more important to recognize what modern racism looks like in practice, up close and personal.

Modern racism is not Bull Connor turning fire hoses and dogs on black people. Modern racism is the reinforcement of white supremacy through systemic, institutional polices, practices and laws that deny equal protection to people of color, regardless of one’s own personal views. While modern racism is often fueled by personal animus, it may thrive even in the absence of it. Modern racism seeks to protect the majority and preserve the status quo, usually without express discriminatory intent. And it exists regardless of political affiliation.

Jonathan Chait recently argued that modern-day conservatism is doomed because its sociological underpinning is white supremacy. But, as Ta-Nehisi Coates eloquently stated, “White supremacy does not contradict American democracy — it birthed it, nurtured it, and financed it. That is our heritage.” As Coates points out, without a corresponding commitment to ending white supremacy, anti-racism alone is unlikely to result in true equality for all.

A favorite refrain of those who claim that talking about race divides the nation and reinforces racial stereotypes, is that we are all one race – the human race. If that is true, then it is in our collective best interest to eradicate policies that have a consistent and deleterious impact on blacks and other minority groups. If we are all one race, then a system that denies one segment of our society the right and the ability to participate fully in its rewards should be unacceptable to all. The American Dream is meaningless if it remains inaccessible to most of America’s minority citizens.

As we approach the 60th anniversary of the landmark decision in Brown v. Board of Education, it is a good time to acknowledge that the tools that dismantled Jim Crow 60 years ago are inadequate to address systemic inequality today. We need new tools to repair a socioeconomic, political and judicial system that, despite the numerous gains made in the last 60 years, remains separate and unequal.

Although the writer Teju Cole warned that we should not “get excited over racist old coots: they are valves, taking pressure off conversations we need to have about systemic white supremacy,” the resurgence of racist old white men like Bundy and Sterling invites us to have a different, more honest conversation about race and racism. We can, and should, start talking about what we, as a society, are going to do to ensure that white supremacy ceases to be a structural impediment to equal opportunity. And it is time to challenge those who favor race-blind rhetoric to ensure that their “one race” vision becomes reality, instead of pretending racism is a problem that no longer exists.