The problem with saying the media has a “woman problem” 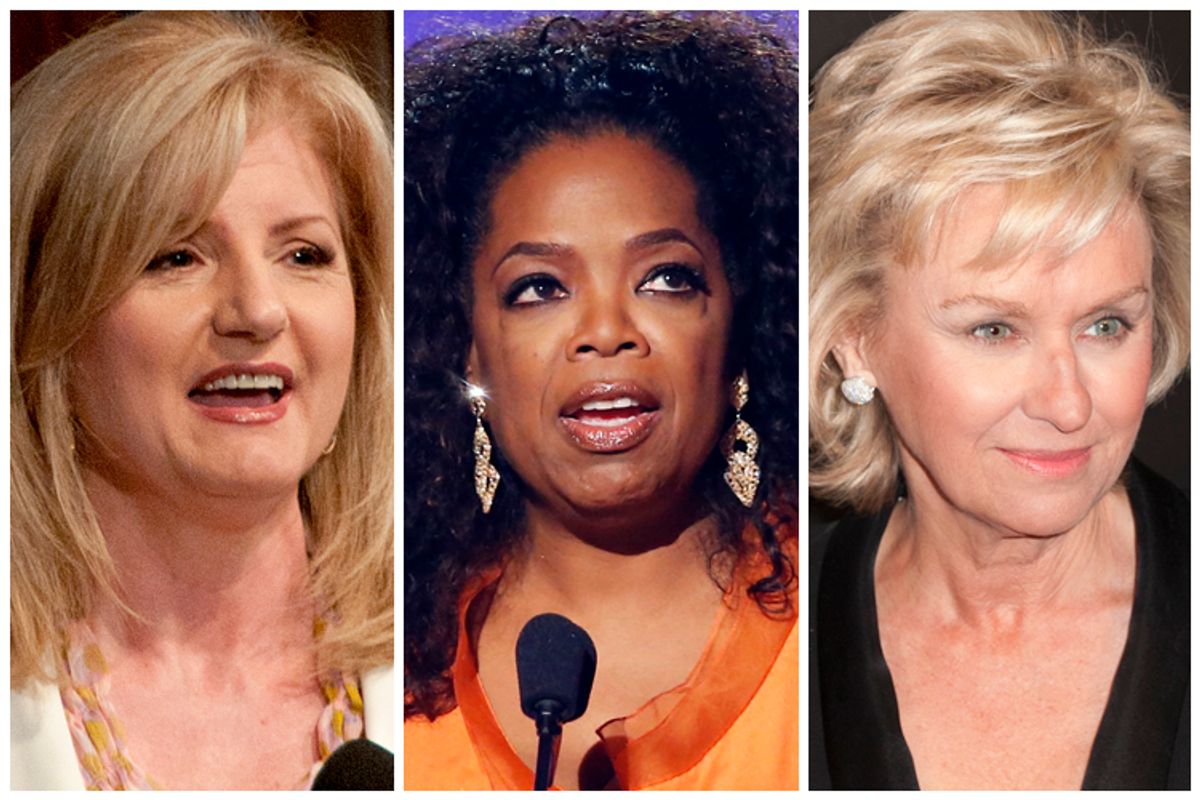 What do we typically mean when we use that construction? People, for example, have “alcohol problems” and “drug problems.” A man, it’s sometimes said, can have a “women problem.”  Institutions, however, do not, like men, have wandering eyes or irate ex-girlfriends and women wanting to work, be paid well and gain prominence in their fields are not the tool of dysfunction, in the way alcohol and drugs are.  The article, describing the findings of the 2014 Women’s Media Center report on the status of women and minorities in media, was illuminating. However, persistently calling this problem—normative institutional sexism that favors men, and overwhelmingly white men—a “woman’s problem” is a common, structural reflection of deep bias.

It’s an entrenched stereotype that women talk more than men. The reality is not that women talk more, however, but that we want and expect them to talk less. In an ongoing effort to determine “Who talks more?” media often focus on perpetually varying differences between the numbers of words men and women speak. But what matters isn’t the number of words, but when, how and where words are used.  Men, and masculinized speech norms, dominate the public sphere.  This is a global, intersectional issue, but it begins first in families, where gender is a primary defining characteristic.

First, we all collude in teaching girls social mores that convey to them, and to boys around them, that what they say has to be more carefully regulated, and matters less. Parents are twice as likely to interrupt or talk over daughters than sons and conversations initiated with girls are also twice as likely to involve chores.  Boys are socialized to use humor and aggressive speech as markers of masculinity. It seems to me that male dominance of “hard” topics in media, for example, or the fact that there are far fewer female critics (a fundamentally "impolite" form of speech) are easily tied to this early socialization.

Likewise, teachers still unconsciously, routinely engage in practices that inhibit girls’ and encourage boys’ speech.  As at home, boys perceive being disruptive, vulgar and loud as “masculine.”  In the United States they are not held to the same standards of self-control. Observations of teachers show that up to two thirds of average classroom time is spent engaged in talking to male students. When teachers speak they also tend to direct their gazes, especially when they ask open-ended questions, disproportionately towards boys.  While boy-crisis-in-education proponents are quick to say how “female-dominated” school spaces penalize boys by forcing them to be quiet and still, they rarely comment on the effect of the same on girls, whom they are likely to assume are “naturally“ inclined to obedience.  Think about how these norms contribute to the fact that young black girls are suspended from school, as early as kindergarten, at significantly higher rates than most boys.

Not only are girls taught that “quiet behavior” is expected “female behavior,” but they are expected to be obedient and polite as a standard for boys. Last year, a school in New Jersey had female students pledge not to use profanity on campus grounds and set a better example for their male peers.  And these patterns extend well into adulthood, where status, highly salient in speech, often takes back seat to gender. Men speak more, more often, and longer than women in mixed groups.

The “woman problem” in bylines described by Mundy is just one manifestation of this.  It’s true in classrooms, boardrooms, legislative bodies, expert media commentary and religious institutions.  A meta-study of interruptions and their purposes reveal that the quality and purpose of interruptions vary by gender. Even in movies and television, male actors engage in more disruptive speech and garner twice as much speaking and screen time as their female peers.

We are also trained to perceive speech balance where there is none.  Listener bias results in most people mis-apportioning speech.  When women speak as little as 30 percent of the time in mixed gender settings, listeners tend to think that they are dominating. The same is true visually. When people see crowds in which women make up only a small fraction, they think the crowd is balanced. This is why conservative media commentators who perceive women’s public expression as “dangerously anti-male“ can talk about “feminized atmospheres” and “too much estrogen” and not face outrage for misleading millions about the nature of reality.

In 1983, Joanna Russ wrote eloquently about the prominence of what men say, and how they say it, in a slim volume called, How to Suppress Women’s Writing. Among the many ways she described were trivialization (chick-lit, romcom, gossip), miscategorization (Virginia Wolff as a political theorist?), historical erasure (have you read A Vindication of the Rights of Women?), and the marginalization of “women’s issues.” These still happen every day.

Masculinized expression is generally considered something women should emulate in order to be successful.  This is one of the uncomfortable dimensions of leaning in and closing the confidence gap. We train girls to speak and act one way and then we scratch our heads and castigate them for failing as adults. “Women have to learn to negotiate like men!” When women do engage in characteristically “male” ways men are frequently condescending (i.e.Rachel Maddow and Alex Castellanos) and patronizing (ie. Mika Brzezinski and Joe Scarborough). As former debater Jen Dziura succinctly put it, “Women’s emotions are “emotions,” men’s emotions are “How People Talk.” Linguists have concluded that much of what is popularly understood about women and men being from different planets, verbally, confuses ”women’s language” with “powerless language.”

The implications of gendered speech norms and the discounting of “feminine” speech norms like politeness in the public sphere is glaringly obvious online, where a woman’s simply expressing opinions with confidence means strange men, often with mob support, issue rape and death threats and express other forms of gender-based hostility.  Feminine user names get an average of 100 sexually explicit or harassing messages a day compared to the 3.7 that masculine ones do.  Harassment often includes words, along the lines of “You should have your throat ripped out,” related to forced fellatio, strangling, taping mouths shut, and other devices for stifling voices. This hostility has a history that long predates bits and bytes.

This history, alive and well today, includes persistent societal tolerance of patriarchal religions’ ritualized silencing of women.  Most major faiths bar girls and women from authority and male speech a necessary part of women’s access to the divine. Ignoring the effect this has on other dimensions of life is like living in a commune full of chain smokers and pretending secondhand smoke won’t give you cancer.

Lastly, no argument for free speech can be made that does not address the smothering impact of widespread gender-based violence on women’s free expression.  A society that allows the pervasive threat of this violence to shape the lives of girls and women and gender non-conforming people is not one that values or protects our free speech, it’s one that values and protects masculinized speech.

It is actually “woman's problem” that in media especially, speech is power and power is speech. But that equation is part of a much broader spectrum. Until we’ve addressed this array of tolerated, institutionalized issues with our media and how we define free speech, we should ban the phrase “woman problem” for good.