These popes are not saints: Time for the media to stop believing in "miracles"

Miracles are bunk, the Vatican remains dangerous. Why does the media give the church's phony PR stunt a free pass? 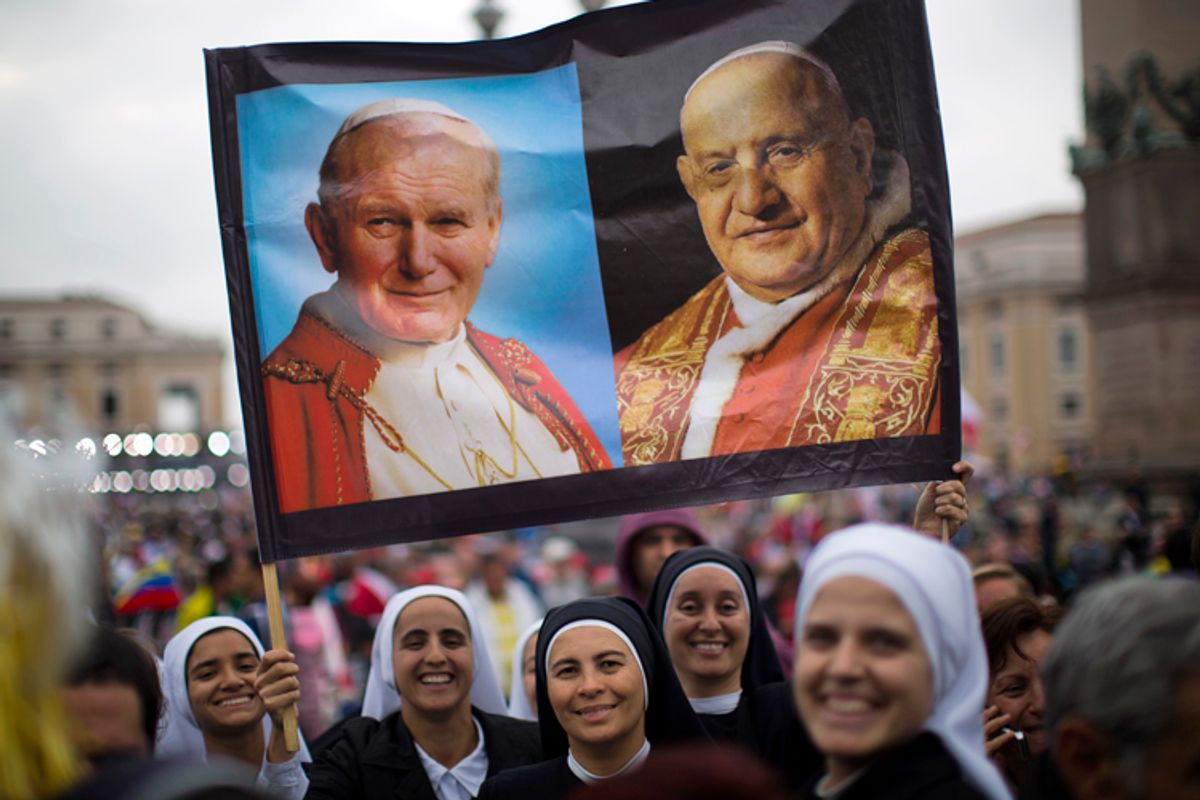 Nuns hold up a poster with portraits of Pope John Paul II, left, and John XXIII, in St. Peter's Square at the Vatican, April 27, 2014. (AP/Emilio Morenatti)
--

One drizzly evening in early March 2013, as a papal conclave was convening within the Vatican to choose a new pontiff, and all awaited a puff of white smoke from the Sistine Chapel’s chimney (indicating habemus papam, or we have a pope), two Ukrainian activists of the radical human rights topless protest movement Femen showed up on Saint Peter’s Square amid a solemn crowd of worshippers.  They stripped off their shirts and gave the just-resigned ex-Pope Benedict XVI a deliciously apt, irreverent send-off, waving flares burning with blood-red smoke, and chanting “Pope no more!” and “Pedophile no more!”

Their act ended in a struggle with police and arrest.  Later, Femen explained their protest in an online post, declaring that “the color of the [flares’] smoke was dictated by the entire bloody history of Christianity,” before it drew attention to the “absurdity of the medieval scene, when, in the enlightened twenty-first century, the eyes of the entire world are fixed on a rusty pipe and the color of the noxious-smelling smoke belching forth from it, at the same time as a narrow circle of church mafiosi chooses yet another infallible leader.”  The Vatican, it then announced, is “one of the most dangerous obstacles on the path to progress that has come down to us from the Middle Ages.”

I have come across no more accurate evocation than this of the media maelstrom over the selection of the current Pope Francis, and no more truthful description of the institution he heads, its true place in society, and its bizarre succession ritual, one shrouded in Inquisitional secrecy and reeking of stale hypocrisy and putrid deception.  Church doctrine maintains the inerrancy of its leader, even as the Vatican has, in recent years, apologized for committing an unparalleled sequence of tragic, often vicious blunders of historic magnitude (the Crusades, the widespread abuse of children, and silence over Hitler’s Final Solution, to name a few).  Pope Benedict XVI himself stands accused of shielding and arranging the reassignment of pederast priests while he was a cardinal, appointed in 2001 by Pope John Paul II to run the Congregation for the Doctrine of the Faith – the body tasked with investigating the Holy Orders in cases of child abuse.

This should come as no surprise.  Popes of centuries past have proved exemplars of pure iniquity, debauching themselves, raping and murdering with impunity.  Stephen VI, in 897, notoriously ordered the rotting cadaver of one of his predecessors be dug up and put on trial for supposed crimes.  Not surprisingly, the so-called Cadaver Synod – no, I am not joking -- pronounced him guilty.

Nevertheless, yesterday in the Vatican, Pope Francis canonized John Paul II and John XXIII, generating hagiographic, front-page news stories across the globe and saccharine live reports on cable channels, almost all less about coverage and more about covering up, with no mention of Joseph Ratzinger’s (let’s call him by his appropriately rodential earthly name) scandals, even though he was in attendance, and even though these scandals riled the press for most of his papacy.  The omission insulted anyone who has shivered with disgust at the Vatican’s endless, ever-lengthening trail of crimes involving priests and their longtime penchant for carnally violating their youngest, most defenseless constituents -- priests who, as matters come to light, tend to be shipped off to other parishes to rape anew.

Pope Francis, alias Jorge Mario Bergoglio, has chosen to overlook Ratzinger’s legacy and concentrate his efforts on lighter, more topical matters, including inequality and social justice, and the media has been complicit in letting him get away with it.    Time magazine even anointed him Person of the Year for 2013, not for altering (which he has not) any of the church’s odious retrograde doctrines on gays, women, abortion or condom use, but for “changing the music.”  Fawningly, the article’s author likens him to a “rock star,” though how a pudgy, middle-aged man who plods around in a white gown and beanie qualifies for such a description mystifies me.  Bergoglio thus went into his canonizations enjoying an entirely undeserved reputation as a “liberal,” the pope progressives could “feel good about.”

Over and over in the treacly, frankly dull reportage sounded the hackneyed adjectives “historic” and “unprecedented,” since never before had the Vatican chosen to mint two saints on one day.  But had news outlets decided not to shamelessly shill for the Vatican and tell the real story, their headlines would have invariably read more like Femen’s acid communiqué.  “Institution Notorious for Abetting Child Abuse Sanctifies Two Former Frontmen” would have better served the cause of truth.  Or “In Questionable PR Coup, Pope Decrying Economic Inequality Officiates at Lavishly Expensive Ritual.”  Cash-strapped and constitutionally secular Italy spent 8 million euros on this religious blowout, but Bergoglio, much fêted this past year for his ostentatiously displayed concern for the poor, managed to secure mega-funding from major banks and corporations so guilty of the stingy heartlessness he denounces.

The bill for the canonization was, to be sure, a pittance in comparison with the Vatican’s reputed net worth of $10 billion to $15 billion.  Donations, in any case, are always welcome, especially to help defray the cost of disbursing hush money to child victims of sacerdotal molestation – more than $2 billion to about a hundred thousand people in the United States alone.  (Check out this nonexhaustive yet stunningly long list of payouts the world over.)  Was any of this mentioned?  If it was, I never heard of it.

Nor was the validity of the canonizations themselves often called into question.  Ratzinger ceded to public exuberation with the just-departed (in 2005) Pope John Paul (aka Karol Józef Wojtyła) and waived the customary five-year wait (intended to avert sanctifications based on just such transient, mundane mass emotions) and began moves toward sanctification only five weeks later.  For Pope John XXIII (né Angelo Giuseppe Roncalli) Bergoglio lowered the bar further, awarding him the honors with only one “miracle,” not the usual two.

But Bergoglio had to keep up the trend.  Wojtyła had started a canonization spree during his 26 years in office, inducting 110 candidates and beatifying Mother Teresa.  (The late maverick New Atheist author Christopher Hitchens did not let the latter event pass without controversy.  Accusing Mother Teresa of cruelty toward the poor she professed to be helping, and calling her “a fanatic, a fundamentalist, and a fraud,” as well as a “lying, thieving Albanian dwarf,” he published a polemical tome, "The Missionary Position: Mother Teresa in Theory and Practice," denouncing her.  The Vatican took this tome seriously enough that it invited him to play the role of devil’s advocate during her beatification.  Her canonization eventually hit a snag when doctors contested one of the miracles attributed to her.)  Ratzinger pulled off 45 sanctifications in seven years, whereas Bergoglio has managed 10 already, with a possible record-smashing score on the way, if one judges by the number of preliminary “venerations” and “beatifications” he has initiated.  Canonizations threaten to become as commonplace around the Vatican as accusations of child rape – a prospect not to be welcomed.

The pomp and ceremony associated with these “sacred” events is surely meant to reverse the faith’s flagging fortunes; Europe is already considered “post-Christian,” and more Americans than ever declare themselves unaffiliated with any religion.  Some journalists have pointed this out.  But what few of them will dare touch in their supposedly objective reporting is the patently outlandish and highly offensive nature of the Vatican and what it (and Christianity as a whole) stands for – dogmas that are all at once anti-science, anti-progress, potentially pro-death (in forbidding condom use, an especially egregious crime in HIV-AIDS infected Africa), misogynistic and homophobic.  Blame the Bible -- a lurid compendium of often bloody and sadistic fables consisting of the Old Testament (the historical veracity of which Israeli archaeologists debunked more than a decade ago) followed by a New Testament based on mutually contradictory accounts of the life of Jesus (whose existence has not been proven either) that was composed hundreds of years after his death.

If CNN and other news outlets really wanted to expand their market share of the fastest-growing demographic -- that of nonbelievers -- they would start by telling the obvious truth about the Vatican and appealing to those who have awakened from the long slumber of religious unreason – or who have never believed at all.  One does not discuss Hitler without recalling the Holocaust.  One should not talk of the Vatican, or any “canonized” popes, without remembering the crimes of the church and their numberless innocent victims.

Enlightened folk, or at least the truly honest ones, might then come to the same conclusion that Femen did at the end of its communique: “The Vatican must die, along with all its ‘holy’ attributes: pedophilia, homophobia, corruption, misogyny and conspiracy!”

Jeffrey Tayler is a contributing editor at the Atlantic. His seventh book, "Topless Jihadis -- Inside Femen, the World's Most Provocative Activist Group," is out now as an Atlantic e-book. Follow @JeffreyTayler1 on Twitter.