Donald Sterling was more than just a "painful episode"

The Clippers owner has been publicly shamed and banned from the NBA. But that won't fix the root of the problem 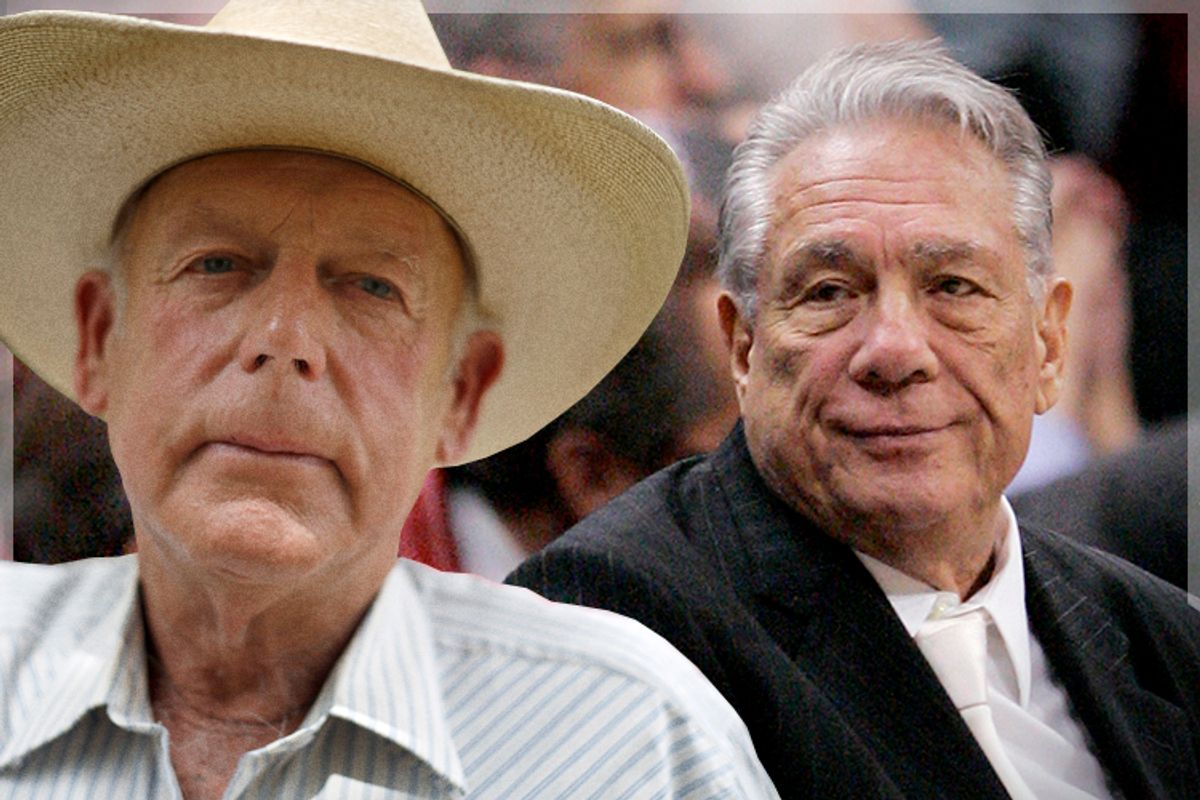 This week’s racist is Donald Sterling, the billionaire owner of the Los Angeles Clippers. As of this writing, he has now been publicly shunned. He has been permanently banned from the NBA and fined $2.5 million, the maximum penalty allowed. The NBA has conducted a “thorough investigation” in recent days. In a letter posted on the NBA website, commissioner Adam Silver writes, “This has been a painful episode for all members of the NBA family,” demonstrating a lack of understanding of the word "painful."

We can pretend this rebuke is, somehow, an appropriate punishment, but it isn’t. The fine, given Sterling’s net worth, is laughable. Banning Sterling from attending NBA games or participating in team management is laughable. Sterling will continue being a wealthy, racist man. Racial inequality in the Untied States will persist because racism, history has shown us, is not a problem that can be solved through such small-scale punishment. As of now, Sterling still owns the Clippers and will only be forced to sell if a majority of NBA team owners vote as such.

For now, the NBA’s punishment is, like the security theater to which we are subjected at airports, an elaborate performance. “Look,” the NBA is saying, “look how quickly we have dispatched with this racist aberration in our midst.” Unfortunately, it is not a new revelation that Donald Sterling is racist (and sexist). He is not an aberration. He has been made to pay for his racism twice before — in 2003 and 2009 — in housing discrimination lawsuits, which are far graver infractions than his racist comments and behavior over the years. The NBA simply remained silent in 2003 and 2009 because there wasn’t yet enough public outrage for them to have to perform some kind of response. It took a splashy gossip spill from TMZ (and what an unexpected meter of justice that site is) for Sterling to face any kind of comeuppance that is not really comeuppance.

There has been and there will continue to be vigorous discussions about race in America. I worry that little will come of these discussions because we aren’t addressing what must be done to change the current racial climate. Donald Sterling’s lack of interest in having black people at Clippers’ games is on par with rancher Cliven Bundy’s nostalgia for slavery as a means of giving black folk something to do. These men’s racial attitudes are troubling and indicative of the racist beliefs far too many people hold. More important, these men and their ilk are propped up by a system for which the consequences for extolling such beliefs are painfully inadequate. They are propped up by a system that enables voter suppression, segregation, the retrenchment of affirmative action supported by even the Supreme Court, a glass ceiling in far too many industries, and the list goes on.

What truly worries me, though, is that far too many people seem surprised when racists like Sterling or Bundy are revealed, as if these men are closer to the exception than the rule. What worries me is that I am not at all surprised when these men are revealed for who they truly are. What worries me is that “post-racial” America is not that different from the Americas that have preceded us, and it might not ever be.