Strip away the villains, and the stuntmen, and the whooshing 3-D effects, and "Spider-Man 2" is irresistible 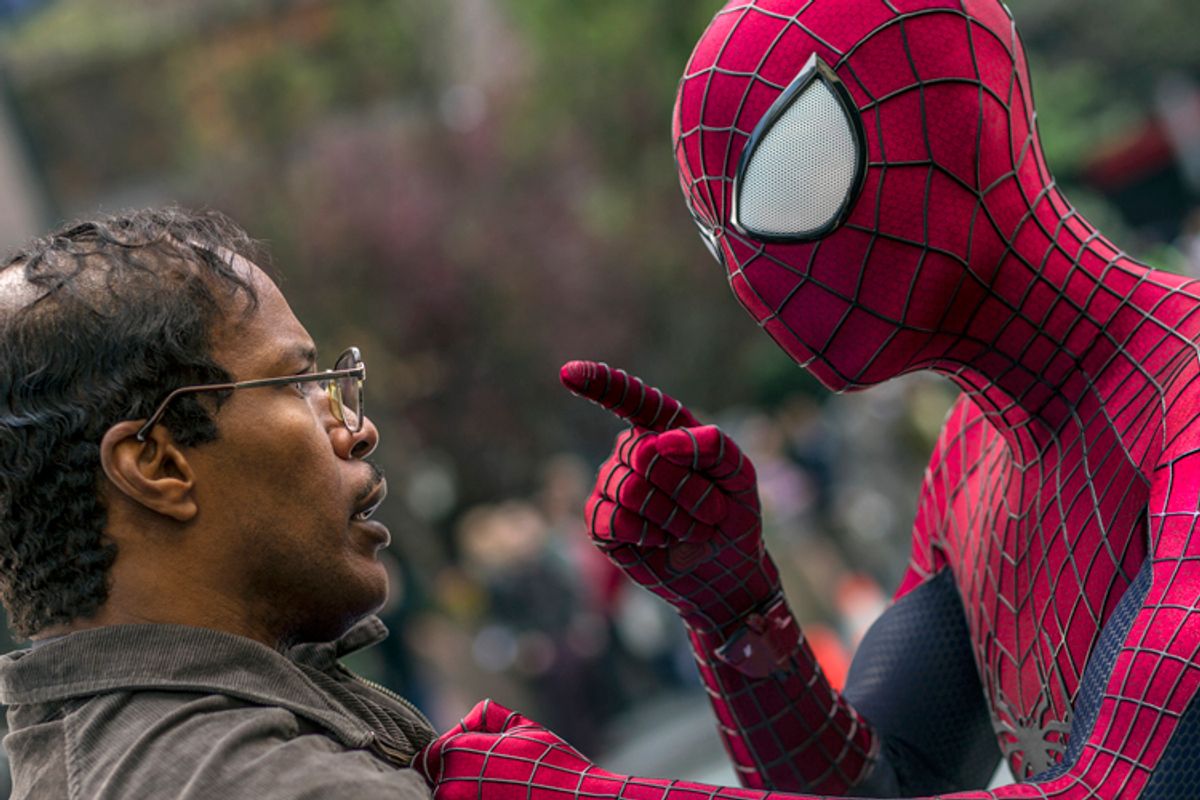 I was all set to write about “The Amazing Spider-Man 2” purely as an epiphenomenon of late capitalism or whatever, an example of the tightening spiral of cultural refraction and the impermeable nature of the superhero movie, which keeps on generating huge returns even as it loses cultural traction. You know, one of those reviews where people write in to say, OK, Poindexter, you know a lot of big words, but what about the damn movie? Those people have a point, at least this time around. While those metatextual issues are still there, this reboot-sequel with not all that much reason to exist turns out to be about half of a pretty good movie, and generally entertaining throughout. The peculiar decision to entrust Spidey to Marc Webb, previously the director of the indie hit “(500) Days of Summer,” pays off much higher dividends this time around, and 30-year-old Andrew Garfield makes a surprisingly credible 21st-century New York City teenager.

On one level, it still makes no sense that Sony Pictures, Marvel Comics, and producer Avi Arad decided to reboot the Spider-Man movie franchise, just five years after Sam Raimi, Tobey Maguire, and Kirsten Dunst got done making “Spider-Man 3.” (As I understand things, Arad faced the possibility of losing the rights after negotiations for a fourth Raimi movie fell apart.) On another, it’s a question that answers itself: Webb’s 2012 “The Amazing Spider-Man” returned more than $750 million worldwide, a large majority of that overseas. That makes it slightly less profitable than the first two Raimi movies, and about on par with the third, but it’s a whole lot of money. My question now is why wait so long to do it all over again? Why not start building the next Spidey relaunch, aimed at today’s 8-year-olds and starring whoever the cutest member of One Direction is, and have the movie ready to shoot by 2018 or so?

I guarantee you can find learned Internet disquisitions on the finer points of distinction between the Raimi and Webb Spider-Man universes, and how both relate to the canonical comic-book web-slinger. That’s way above my level of expertise with this material, but I think we can say that Raimi’s movies were colorful, constructed illusions, set in a fantasy version of New York that bore little relationship to the original, whereas Webb’s have taken a step or two in the direction of realism. That’s a funny word to use in a movie about the ultimate nerd-boy fantasy character, I guess, and there are certain shots in this movie – of Spider-Man plummeting into space off the side of a skyscraper, for instance – so dense with CGI images they’re basically animation. (In fairness, Webb uses sets and stuntmen a lot of the time too.) But Garfield is a fine and versatile actor, and this time around he broadens and lightens his Holden Caulfield approach to the character of Peter Parker, a recognizable variety of wiseass kid who has a poster for “Dogtown and Z-Boys” on the wall, a copy of “Infinite Jest” on the desk (probably unread) and just a touch of hip-hop to his speech. (Garfield doesn’t go all the way to “A’ight,” but almost.)

In fact, I enjoyed Peter’s on-again, off-again romance with the feisty Gwen Stacy (Emma Stone), and his uneasy rapprochement with his old friend Harry Osborn (Dane DeHaan), enough that I badly wanted “The Amazing Spider-Man 2” to remain in that vaguely naturalistic vein, and bag all the stuff involving stuntmen, villains in funny costumes and whooshing 3-D effects. Garfield and Stone are of course way too old to play high-school seniors (she’s 25), but they have terrific chemistry, and the forces pushing them together (love) and pulling them apart (life) never feel abstract or artificial. It’s as if there’s a New York rom-com – and a pretty good one! – in the middle of this movie trying to get out. DeHaan is a fast-rising star who plays James Dean in Anton Corbijn’s upcoming “Life,” and his portrayal of Harry as a lonely prep-school hipster with a big, not-quite-gay mancrush on Peter is one of this film’s great strengths. That’s meant to provide some depth to Harry’s transformation into the Spidey-hating Green Goblin, I suppose, but fundamentally the movie is a lot more boring when it defaults to comic-book archetypes.

Similarly, Jamie Foxx is more entertaining as a Spidey-obsessed systems engineer with a comb-over than as Electro, a supervillain who has cool transmutational properties but doesn’t make any sense, even by comic-book standards. Even the fact that “Amazing Spider-Man 2” has two dispensable villains instead of one, and throws in the suggestion of several more before it’s over, betrays the fact that Webb’s heart is not in the big action showdowns, which are rendered with high-tech sizzle and excitingly captured by cinematographer Daniel Mindel, but which I now have trouble remembering. If you see Spidey catch a flying cop car once, you really don’t need to see it three more times. Times Square is totally destroyed in this movie, and that was oddly gratifying to see, but superhero action flicks after “The Avengers” and “Man of Steel” and the collected works of Michael Bay have reached the level of cocaine overdose, where more is not more and only leaves you feeling disoriented and on the edge of migraine.

To speak of a studio product like this as reflecting the director’s work and vision is, of course, the ultimate auteurist fallacy. It looks to me as if Arad and the other producers sought to correct the forgettable, generic quality of “The Amazing Spider-Man” by bringing in the cavalry, in the form of co-writers Alex Kurtzman and Roberto Orci. Those two, who met in high school and rose to become writers for J.J. Abrams on “Alias,” comprise a peculiar cultural force; they’re the masters of the unnecessary revival. They wrote “Mission: Impossible III,” Bay’s first two “Transformers” movies and Abrams’ two “Star Trek” pictures (with at least one more to come), and preside over the “Sleepy Hollow” and “Hawaii Five-O” TV series. They plan to relaunch the “Mummy” movies and are supposedly making “Van Helsing,” with Tom Cruise playing Count Dracula’s nemesis. Their Documents folder is full, one assumes, of proposals to resuscitate everything else from the ‘60s, ‘70s and ‘80s, whether or not it’s been tried before: “The Flying Nun,” with Elizabeth Olsen. Jon Hamm and Christina Hendricks in “The Avengers” (you know what I mean; the other one). Every Arnold Schwarzenegger movie, including “Twins” and “Kindergarten Cop,” remade with Channing Tatum.

Kurtzman and Orci have now been entrusted with Spider-Man into the indefinite future (Webb says he will only direct one more film) and, as usual, they’re trying to split the difference between nerd-ball loyalty to the canon and what they perceive as contemporary taste. Let me say this, carefully: “Amazing Spider-Man 2” tackles one of the most famous and memorable twists of fate in the Marvel Comics universe, and does so with some measure of genuine emotional force. It’s a character-shaping moment that Raimi’s films never wanted to go near, and one that should comfortably extend the half-life of Garfield’s brooding, Salinger-esque Spidey over a few more movies. Honestly, one can only wish that Hollywood made movies for non-teenagers and non-comics fans with this much care and reverence. Are superhero movies dying? Well sure, but you and I and the planet may die first.