Forget Shep Smith rumors. If you care about LGBTQ people and their rights, here's the real Fox News scandal 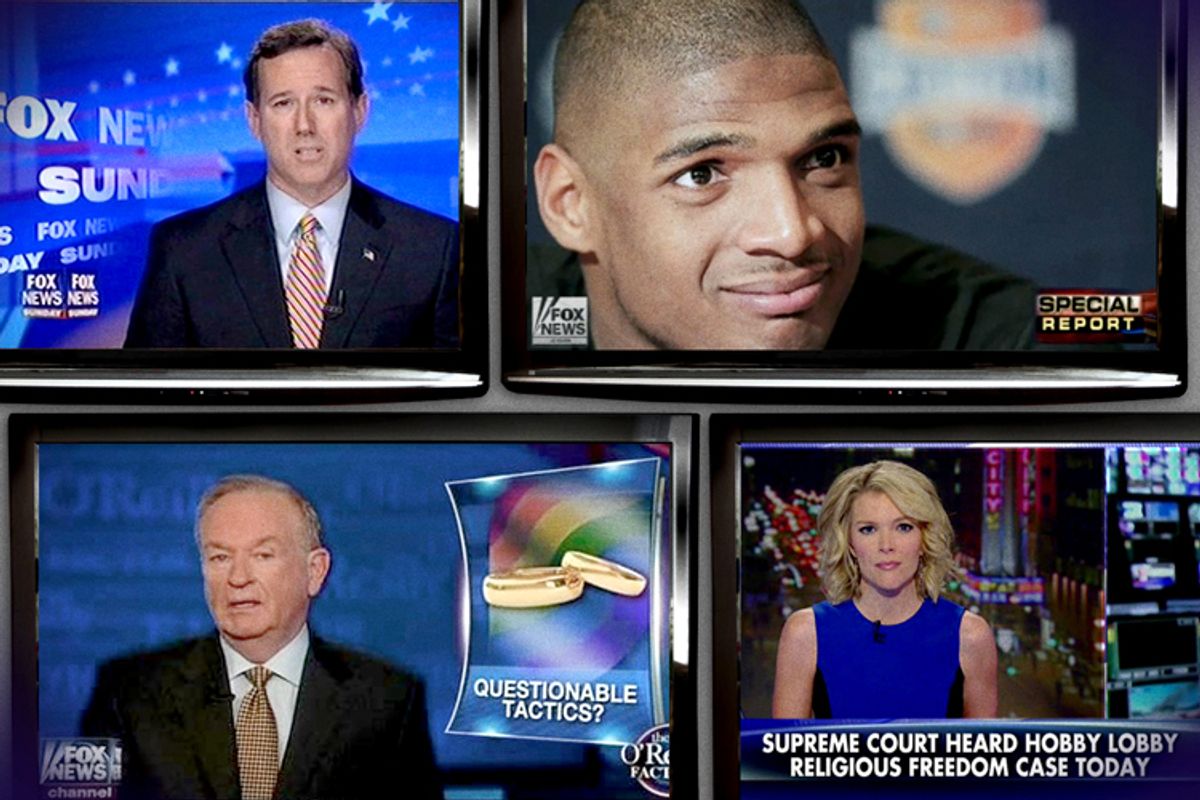 First came the Wednesday morning story alleging that Fox News president Roger Ailes had "shoved Shepard Smith back into the closet" after the longtime network anchor had reportedly expressed an interest in coming out. Peppered with quotes from anonymous Fox insiders, Gawker reporter J.K. Trotter alleged that rampant homophobia from network executives had come to define Fox's relationship with Smith, kept him in the closet and ultimately cost him a prime-time hosting gig.

Then came the Wednesday afternoon denial from Fox News -- a joint statement from Ailes and Smith calling the report "100 percent false and a complete fabrication." Bill Shine, another network executive named in the piece as pretty much the beating heart of Fox's homophobia problem, also called the report "pure fiction."

A number of people have said that Smith is gay, but he has never disclosed this information publicly. I personally don't know, and don't really care. I also don't really care that Ailes and Smith are denying the allegations about entrenched homophobia at the network. Because regardless of the Smith subplot, Fox News is still pretty much a cesspool of reflexive anti-LGBTQ bigotry, and that's what actually matters here.

The network seems to pretty much despise LGBTQ people, and reliably supports the policies and politicians that make their lives dramatically shittier.  This is Fox News' actual LGBTQ problem.

Bill O'Reilly regularly accuses trans children of being sexual predators, and has a thick disdain for the policies that ensure they have equal access to school facilities and basic rights. During a 2013 segment on a California law that allows trans students to play on athletic teams and use bathrooms that correspond to their gender, O'Reilly called such protections "the biggest con in the world." He also declared that if such a law had existed when he was a teenage boy, he would have used it to sexually harass girls. "I would have been on every … California, man," he said. "If I come back and I am reincarnated ... and I'm a teenager? Bang … I'm out to California." (He's also compared trans people to Hooters patrons. And Ewoks.)

Around the same time, Greg Gutfeld said that he, like O'Reilly, would have also abused laws that protect the rights of trans children in order to sexually harass teenage girls. "As a devious teen growing up," he boasted, "I would tell girls that I'm a girl trapped in a boy's body, just so I could sneak into the girls' bathroom."

And guess which network Bryan Fischer -- the leader of the virulently anti-LGBTQ American Family Association -- looks to when he needs a mainstream news source to back up his bigotry. During a recent rant against the California trans rights law, Fischer cited a column from Fox News' "medical expert" Keith Ablow.

When the Senate passed the Employment Non-Discrimination Act that same year -- a historic move to secure basic job protections for LGBTQ people -- the network largely ignored it, except to ask if it was just a tool the Obama administration was using to distract the country from the "failure" of the Affordable Care Act. Some also tried to frame it -- a measure ensuring that a person can't be fired just because they put a photo of their partner on their desk -- as an assault on religious liberty. (The measure died in the House and is still languishing in Congress. As a result, women like Laura Jane Klug who have lost their jobs for arbitrary and blatantly discriminatory reasons continue to have no legal recourse. Which I bet O'Reilly thinks is just hilarious.)

The network even manages to be completely terrible and homophobic when it comes to ridiculous soft news. On "Fox & Friends" recently, host Brian Kilmeade brought in a photo of himself at his high school prom for a little light morning banter, and referred to his and his friends' coordinated tuxedos as "a little gay." Neither of the other hosts cared. In fact, Elisabeth Hasselbeck laughed and cheerfully anticipated the "17,000 emails" that the network would receive because of Kilmeade's homophobic comment.

Even Fox's B-squad is reliably awful. Shannon Bream -- while filling in for Megyn Kelly on "The Kelly File" -- couldn't see the problem with letting businesses in Arizona discriminate against LGBTQ people. When her guest said that stores should be legally compelled to serve all customers equally, Bream literally asked him, "Why?"

"I mean, this is America," she continued. "We all have freedoms. I mean, why would you want to do business with somebody, no matter what your personal issue was that they had with you, why would you want to force them to do business with you? Why not just go down the street and say, 'I'm going to spend my money to somebody who supports me and is kind to me and wants to help me and provide these services for me.'"

This list could seriously go on forever. Ablow thinks that the limited victories for equal marriage in recent years symbolize the "death" of marriage. Producers regularly invite on Tony Perkins, who is not an expert on anything, to serve as an "expert" on everything. I mean, there are entire websites dedicated to documenting Fox News' festering homophobia.

Day in and day out, these experts, journalists and hosts demean and slander LGBTQ people like it's their job. (It is their job.) They play "Dude Looks Like a Lady" to introduce a segment about Chelsea Manning. They laugh about petty gay jokes that a high school freshman would roll her eyes at. Fox is teeming with petty, bigoted bullies. And it's the top-rated cable news network in the nation.

So we may know absolutely nothing about what really went on between Roger Ailes and Shep Smith, but it's almost beside the point. The real scandal at Fox News is already in the open, there for all to see.