Disney's animated zombies: How classic stories are lost in reinvention

Sofia Coppola is re-imagining "The Little Mermaid," but it was Disney who altered the character beyond recognition 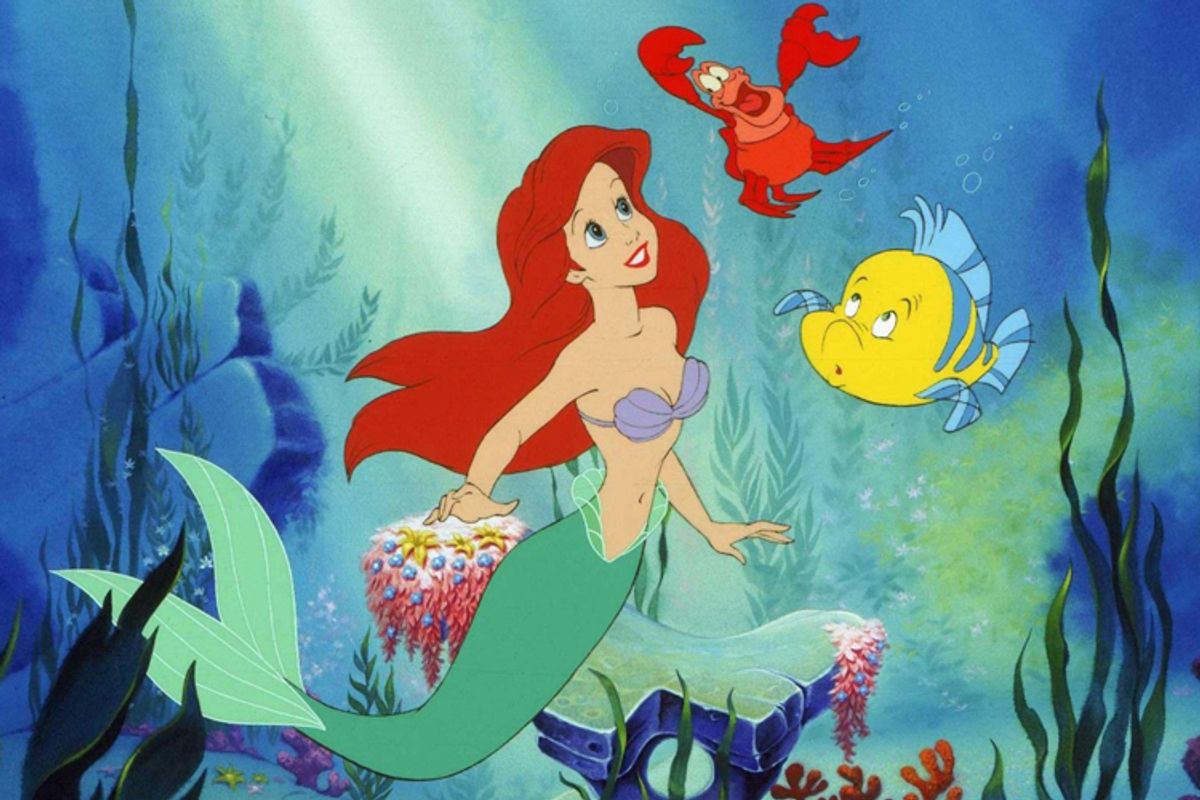 “I will do it,” the original Little Mermaid says, right before she trades in her tongue for a pair of legs that will take her where she wants to go. Characters like that stick to our ribs. Eve. Batman. Cleopatra. Robin Hood. Lady Macbeth. Santa Claus. Dracula. They have incredible grit. These undying characters of the collective consciousness are reborn time and again into a world of people taken by their Scheherazade powers of storytelling. They are creatures patinated by metaphor, revisionism and licentia poetica, inclined to unbuttoning their historical and authored sources and wearing lives of their very own. That's what it is. When Vladimir Nabokov told the Paris Review that “Lolita is famous, not I,” his was not the tone of a proud father. He sounded more like a humble servant, or an infected animal communicating a virus.

Two months before the publication of “The Little Mermaid,” in February 1837, Hans Christian Andersen wrote to fellow Danish author B.S. Ingemann, crowing that she was “much better than Thumbelina” (another of his fairytale creations). He insisted this little mermaid was his. She was not refined from regional tales about friendly merfolk, such as were popular in seafaring Scandinavia, nor derivative of de la Motte Fouqué’s fairytale novella "Undine" (1811), or shaped by his contemporaries, including Ingemann himself, from whose "De Underjordiske" ("The Creatures from the Underworld," 1817) Andersen had obviously borrowed plot. "The Little Mermaid’s" author was diversely insecure and arrogant, it’s true. But he was also onto something. Andersen said “Den lille havfrue” was the only of his fictions to have touched him in the writing process. “You may smile?” He wrote Ingemann. “I do not know how other authors feel, but I suffer with my characters. I am in a good and a bad mood with them.”

The human portrait of Odysseus’ femme fatale would prove a permanent public relations move for her kind. This mermaid — afraid to die and dissolve into sea foam, lovesick, dreaming — pulled an audience to her irresistibly. Walt Disney saw. “I look for a story with heart,” Disney said of his scouting eye. “It should be a simple story with characters the audience can really care about. They’ve got to have a rooting interest.” He started developing “The Little Mermaid” for a featurette in the 1930s but shelved it in favor of “The Ugly Duckling” (also by Andersen). That was the file Walt Disney Studios dusted off in the boardroom in 1984.

“The fact is,” said then-chairman Jeffrey Katzenberg, soft-pedaling, “that the last couple of animated movies made were not particularly good.” Newly poached from Paramount Pictures, Katzenberg was going to mount a comeback in the wings of Disney’s hard-up motion picture division. “Katzenberg sells dreams,” Aljean Harmetz wrote for the New York Times in 1988. “The 37-year-old Katzenberg doesn't have dreams. He has goals.” (Alec Baldwin once described him as “the eighth dwarf, Greedy.”) The studio hadn’t produced a princess since Aurora, in 1959, and, amongst themselves, determined to “wake Sleeping Beauty.” They desperately needed a heroine with whom the new generation of girls could identify. And the animators fell on one of the least ignorable personalities of all — a willful sweet-sixteener with a red mane based on astronaut Sally Ride’s hair in outer space: a siren, to be sure.

In 1989, Ariel splashed in box offices. The company’s first princess in 30 years was a record-breaking sea-become-cash cow. “DISNEY ANIMATORS BACK IN FORM WITH ‘MERMAID,’” The Boston Globe ran, in which theater critic Jay Carr reported Sebastian the crab as Ariel's “Jiminy Cricket-like sidekick,” and called Flounder the fish “Dumbo-like.” Even Ariel’s supporting cast were recycled success stories. "The Little Mermaid" began a creative boom, in fact, of cherry-picking mythologized favorites for the screen, now considered the company’s renaissance — Beauty and the Beast (1991),"Aladdin" (1992), and "The Lion King" (1994, based on “Hamlet”), slowing with "Pocahontas" (1995), "Hercules" (1997), and "Mulan" (1998) — that fanatically endeared generations to Disney’s accounts of happily ever after.

The era also seriously vexed scholars with its lite treatments of the deep and necessarily dark — nothing new. After "Mary Poppins" (1964) debuted, Max Rafferty, the superintendent of public instruction in California, praised Walt Disney as “the greatest educator of this century.” Frances Clarke Sayers, the children’s librarian and UCLA lecturer, responded in turn, with an unsugared letter to the Los Angeles Times. “Mr. Disney has his own special genius,” she blasted. “It has little to do with education, or with the cultivation of sensitivity, taste, or perception in the minds of children.” Adding, “His treatment of folklore is without regard for its anthropological, spiritual, or psychological truths. Every story is sacrificed to the ‘gimmick’ (Dr. Rafferty’s word) of animation.” Sayers is channeled by P. L. Travers in "Saving Mr. Banks" (2013), a film most about the conflict between original intent and interpretation. “I know what he's going to do to her,” to Mary Poppins, spits Emma Thompson’s Travers. “She'll be cavorting, and twinkling, careening towards a happy ending like a kamikaze.”

The raids on the rolodex of legendary characters doesn’t end. For its part, Disney is about to reboot its first take on “Sleeping Beauty” with "Maleficent." And director Joe Wright, having worked years developing a live-action adaptation of Andersen’s “The Little Mermaid,” has abandoned the project in favor of doing Peter Pan, another sugar babe — and pop directress Sofia Coppola has picked the mermaid up. Coppola says she intends to respect the 1837 storyline, about a sea princess who traded her voice for legs because she loved an earthling prince, but mostly — and most importantly — because she wanted a human soul. It’s a turnaround from the motivations of "The Bling Ring’s" subjects, but, whatever her agenda, Coppola’s movie will hardly make the Little Mermaid’s life.

“At least they seem to be going for an unhappy ending,” says Jens Peter Munk, an art historian turned municipality employee. As Copenhagen’s Keeper of Monuments, Munk is responsible for maintaining the city’s fabulous number of public statues, including his “special friend,” Denmark’s celebrity statue, the bronze embodiment of Andersen’s Little Mermaid. Den lille havfrue waits at the lip of Copenhagen Harbor. She is a figure of sadness in what is often ranked the happiest country in the world — and strangely enough, she is its totem animal.

The statue (1913) rose to symbolic stature in the interwar years, when Denmark’s nascent tourism board was looking for a good story to draw foreigners to “the Paris of the North.” When the organization performed a study that revealed the popularity of Hans Christian Andersen’s fairytales abroad, it tapped the existing statue as a mascot of their storybook land, sealing her fate.

Danes have an ongoing love-hate relationship with the statue. It reached a fever pitch 50 years ago, on April 25, 1964, when an artist beheaded the naïve princess. But even now, it — she — is their general ambassador. A clean graphic of her silhouette, for example, still serves as the logo of VisitCopenhagen, the capital arm of Denmark’s official tourism organization. Danes affectionately call her their “eternal whore.”

There’s no denying the Little Mermaid is a good story, and it will be interesting to watch the Danish response to Coppola’s movie. When Disney’s "The Little Mermaid" ricocheted home, to the motherland, in November of 1990, Danish newspaper critics advised readers to forget Andersen and enjoy the film by letting it stand on its own two feet. Disney’s "Den lille havfrue" flopped in Danish box offices, anyway. Some suggested Danes couldn’t recognize her above the calypso music, though there is a part in the movie when homage is paid — when Ariel folds herself up on a rock and looks longing toward the seashore, at Eric. She’s the spitting image of Copenhagen’s "Den lille havfrue."

“There's really nothing you can't do to this global icon,” says Danish cultural tourism historian Mikael Frausing. “It's like pirates or Vikings or samurais; the point is not so much what is the ‘real story’ as how pop culture is able to renew an interpretation and reshape existing cliché into new material. Disney being the undisputed champion, of course.”

For contemporary children, Ariel is the Little Mermaid. Last August, when Copenhagen celebrated the statue’s 100-year jubilee, Mayor of Culture Pia Allerslev gave a speech that went out of its way to press the difference between Disney’s and Andersen’s character. From the elevated position of her dais, Allerslev entreated parents not to let their children get their inheritance from the American movie. Read H.C. Andersen’s “The Little Mermaid” to them, she said, that they too might know the sweet girl.

Chantel Tattoli is a journalist based in Paris. She is currently working on a cultural biography of Copenhagen’s Little Mermaid—and welcomes stories about the statue. You can reach her at chantel_tattoli@me.com.