Remember when the right was all about "law and order"? Nowadays, Fox News is lauding a murderous fiend 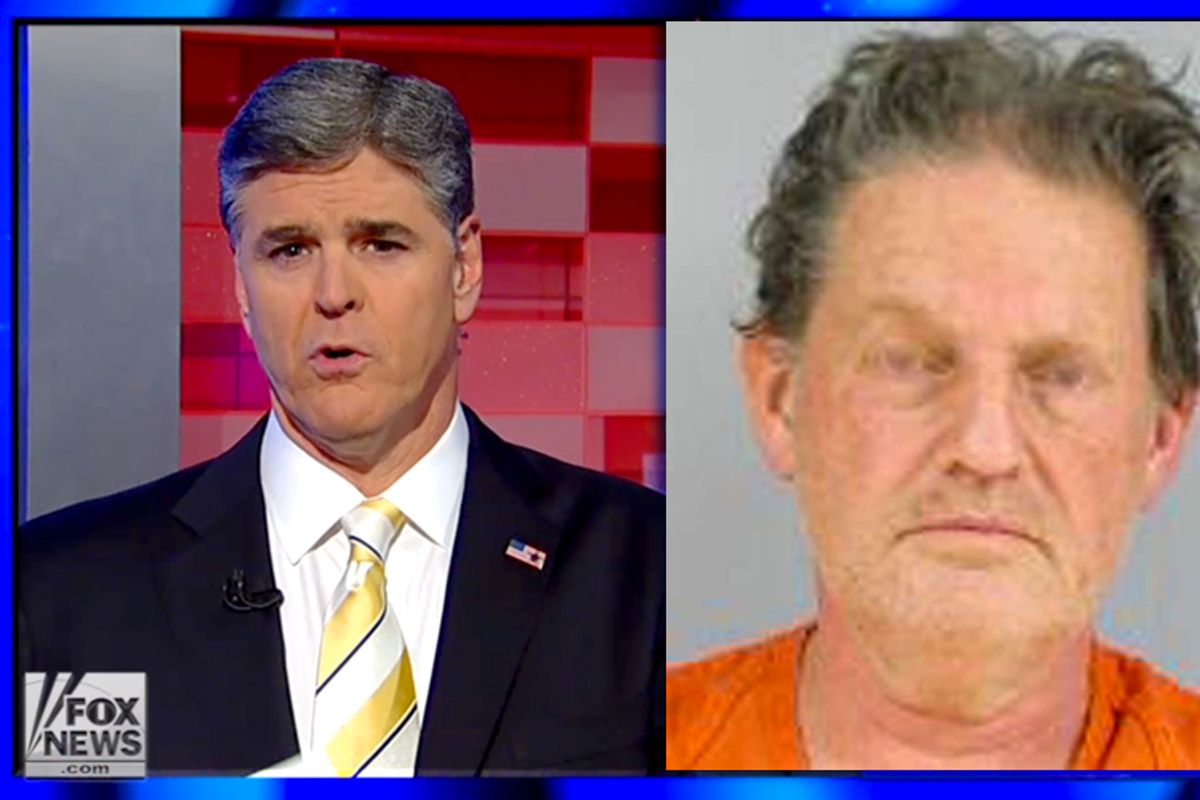 Poor Sean Hannity. He's every wingnut grandma's favorite little boy but he just can't catch a break. First he suffers the indignity of being beaten in the ratings by MSNBC feminazi Rachel Maddow and then Big Daddy Roger Ailes demotes him for conservative bombshell Megyn Kelly. And then he was threatened with the loss of every right-wing celebrity's most valued possession (after his AR-15 of course), his radio show. It's enough to make any red-blooded right-wing fellow feel a little bit insecure.

But Hannity has been going beyond the normal macho Fox News posturing to try to win his way back into the hearts and minds of conservatives. He's become downright bloodthirsty on a level you rarely see outside the right-wing fever swamps (where they are still gleefully enjoying the details of this week's "botched" executions in Oklahoma -- with a bottle of nice Chianti).

First he became Cliven Bundy's chief Fox New cheerleader, practically begging somebody out there to take a shot at somebody. It didn't seem to matter who, just as long as blood was shed. He tried as hard as he could to work Cliven Bundy into a frenzy, even as old Cliven seemed fairly oblivious to the "threat" of an alleged federal raid being flogged by extremist Oath Keepers.

Unfortunately for Sean, Cliven Bundy proved himself to be an unrepentant bigot and stepped all over his own story, leaving Sean standing there with his shtick in his hand.

But he's not giving up on his quest to give Ted Nugent a run for the title of wingnuttia's most barbarous commentator, not by a long shot. His latest commentary sets out to prove that not only doesn't he believe that the federal government has lawful powers under the Constitution, he's ready to step up and defend the kind of vigilantism we haven't seen since ... well, ever. Media Matters caught the segment:

Fox host Sean Hannity dismissed the murder convictions of a Minnesota homeowner who used excessive force in killing two teenagers who broke into his home, claiming with exasperation, "They broke into the guy's house."

On April 29, Minnesota resident Byron Smith was convicted on two counts each of premeditated first-degree murder and second-degree murder in the shooting deaths of Haile Kifer, 18, and Nick Brady, 17. Brady and Kifer were killed on Thanksgiving Day 2012 after breaking into Smith's home.

While homeowners have broad latitude in defending their residences from intruders, a jury believed that Smith went too far. Prosecutors compared Smith's actions on Thanksgiving Day to the setting up of a deer stand. After spotting a neighbor he believed had previously burglarized his house, Smith moved his car to make his home seem unoccupied and then waited in his basement "with a book, energy bars, a bottle of water and two guns."

Smith also set up an audio recording which captured what transpired. After breaking a window, Brady came down the basement stairs and was shot two times. Smith was then heard saying, "You're dead," before firing a third shot into his face. He then put Brady's body on a tarp and moved him to another room.

Moments later, Smith wounded and then killed Kifer execution-style with a shot under her chin.

The Washington Post published a full recounting of the audio recording of the murders. It is as chilling as it gets.

Hannity does object to the fact that the murderer called the victims "vermin" but otherwise he apparently thinks the following is a normal comment from a citizen exercising his constitutional right to self-defense:

One of his guests put up a mild objection while another claimed, "The guy should get a medal of freedom for what he did." Geraldo Rivera objected to the execution style coup de grâce but admitted that he would have shot them too, after which Hannity happily exclaimed, "You're becoming a right winger!" And then they all shared a hearty laugh about the whole thing.

This is a very sick strain in our culture at the moment. Despite the fact that the legal system and a jury found this fellow guilty of premeditated murder --- and there is even a recording of it, featuring the murderer calling the 17-year-old girl a "bitch" before he put the gun under her chin to finish her off --- a major conservative media personality stands behind him under the guise of the "castle doctrine" and "stand your ground" which has apparently evolved to mean that you should be able to kill anyone you think as "bad" with impunity.

And to think it was the conservative movement that once fetishized "law and order." Of course it was always self-serving. One only has to recall their defense of William Calley and the massacre at My Lai to see through their alleged reverence for following the rules and norms of civilized society when it suits them. Or our long history of lynching, for that matter --- the original all-American vigilantism. But it's still startling to see television anchors lauding a man who is clearly a murderous fiend and then sharing a good chuckle over the whole thing.

And I doubt it's going to help Sean Hannity in the ratings, no matter how much blood lust he tried to evoke in his audience. After all, Ailes moved him to Fox News purgatory --- 10 o'clock. When's the last time your grandfather wasn't snoring like a freight train in his Barcalounger at that time of night?