Obamacare will be vindicated by history: From JFK to FDR, here's how the nation's memory works 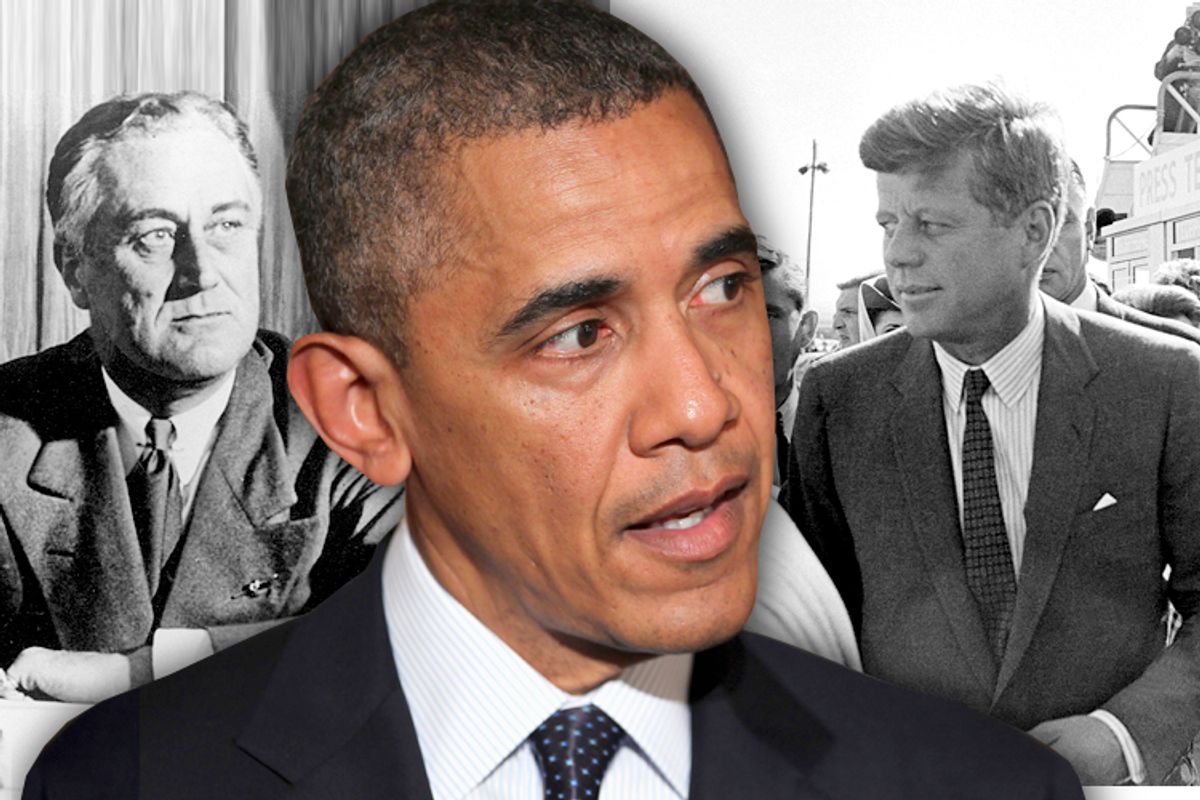 Not everyone viewed the introduction of Obamacare as cause for national celebration, but that doesn’t mean history won’t remember it as such. Time has a habit of changing the perception of presidential initiatives.

The Gettysburg Address may be the most iconic speech made in America, but not everyone shared that sentiment in 1863. Far from being revered as an affirmation on human equality, Lincoln’s words were roundly criticized by the Democrats of the day, while the Chicago Times described the president’s efforts as “silly, flat and dishwatery utterances.” Moreover, Lincoln’s words weren't even the actual Gettysburg Address; they were brief dedicatory remarks following on from Edward Everett’s two-hour oration.

Many moments that seemingly define American ideals have been repackaged as occurring in a society much different from their time. Often, the prevailing political landscape has been toned down to allow the depiction of a nation unified by positive thought.

Today, John F. Kennedy’s space exploration efforts of the 1960s are rightfully spoken of in the context of the successful moon landing, an effort that confirmed America’s unyielding ambition. Yet the public scorn of the era’s numerous failed rocket launches is long forgotten.

Many commentators unfavorably compare Obama’s foreign policy struggles to Ronald Reagan’s supposedly sterling record. Reagan’s foreign achievements are highlighted by bold initiatives that weakened the threat of the Soviet Union and ultimately brought victory in the Cold War. But the passing of time has faded memories of the clandestine Iran-Contra weapons affair in which the Reagan administration supplied weapons to Iran and aided the contras in Nicaragua.

Such unsavory incidents are inconveniences to a rosy narrative. Instead, it brings great comfort to look back at great achievements of the past and nostalgically reminisce of a time when America cheered on the enterprise of its leaders. Rarely is it mentioned that throughout the 1960s a majority of Americans did not believe NASA’s Apollo project was worth the cost. Nor is attention given to the hawks within Reagan’s own party that lambasted his decision to ease tensions with Soviet leader Mikhail Gorbachev.

While seemingly difficult to imagine, decades from now history will note that the Affordable Care Act symbolized one of the great presidential efforts to fight inequality in America. Long forgotten will be today’s headlines of a temperamental website, deadline delays and mixed messages about keeping existing plans. Instead, it will be heralded that Barack Obama made a superior healthcare service available to the masses.

It may be noted that the initiative was not an instant success and needed retooling in subsequent years, but only one man will be given credit as its instigator.

The short version of Barack Obama’s bio will not reference the failure to implement his intended education and energy reform, or that a reset of Russian relations went sour. Perceptions of the Afghanistan and Iraq withdrawals may change with time, but Obama will still be remembered as a fighter against society’s widening income gap.

Thankfully for Republicans, the manner of their opposition to affordable healthcare will become a minor footnote. History will record that Obamacare passed both houses of Congress, was signed by the president and approved by the Supreme Court. Long forgotten will be the details of how Republicans ignored the legislative process, did everything in their power to repeal the law and bowed to extremist elements who forced a government shutdown for the first time in 17 years.

Romanticism will prevent people from caring about such details. We like to look back on great moments and imagine ourselves as part of a unified society bounded by optimism. Who doesn’t like to think they would have saluted Lincoln’s words, cheered on the bold Apollo missions and admired Reagan’s bravery in opening the Iron Curtain? It can seem incongruous that monumental changes occurred without universal support. But they do because humans are not of one mind. And in a land where ideas can be expressed freely, such a state of unity can never exist.

Moreover, future generations will struggle to believe that one party so vigorously opposed affordable healthcare without presenting a coherent alternative.

The Obamacare system may be flawed, but it is a start. Some people have lost their existing coverage and must enroll in a plan that meets the improved standards demanded by Obamacare. This can incur greater costs for the individual, but subsidies are needed to provide healthcare for those uninsured with low incomes. It will be a moot point in years to come; popular history looks favorably on inconveniences of the few for the benefit of the many.

The only viable conservative alternative to Obamacare is no system at all, but nobody will want to think that such a large portion of the political establishment was happy with such a state. Even if some believe that the previous situation of 48 million uninsured without any prospect of coverage is better, repeal is unattainable. Republicans were aware of this before the government shutdown, but the party bowed to fanatics and went on a campaign for maximum disruption for the sake of an unattainable goal. The current political system, effective for more than 200 years, means that changes to law cannot be made without going through the legislative process.

With more than 7 million enrolled, Obamacare is here to stay. Regardless of future modifications, of which there will be many, affordable healthcare has been instituted in the United States, dragging millions away from the threat of imminent bankruptcy and terminal illness.

Those opposing Obamacare may not be as ignoble as the politicians who opposed the Civil Rights Act of 1964, but the racial significance of affordable healthcare will not be lost. At present 55 percent of the uninsured are non-white. In time Obamacare will help break down the barriers between rich and poor.

Obama will be appreciated as the first black president who also made healthcare a reality for everyone. It will define his legacy, with his political missteps whittled from his narrative. Republicans are on the wrong side of history, but their obstructionism will fade from public consciousness. We like to think that a time will return when the nation supported the conviction of its leader. But great achievements aren’t born from support from the masses, they happen when someone risks derision to surpass the status quo. As President Kennedy said: “We choose to go to the moon in this decade and do the other things, not because they are easy, but because they are hard.”