Why Paul Ryan's newfound "compassion" is terrible for American cities

Ryan is on a relentless PR push to show he cares about poverty — so why is he trying to make matters worse? 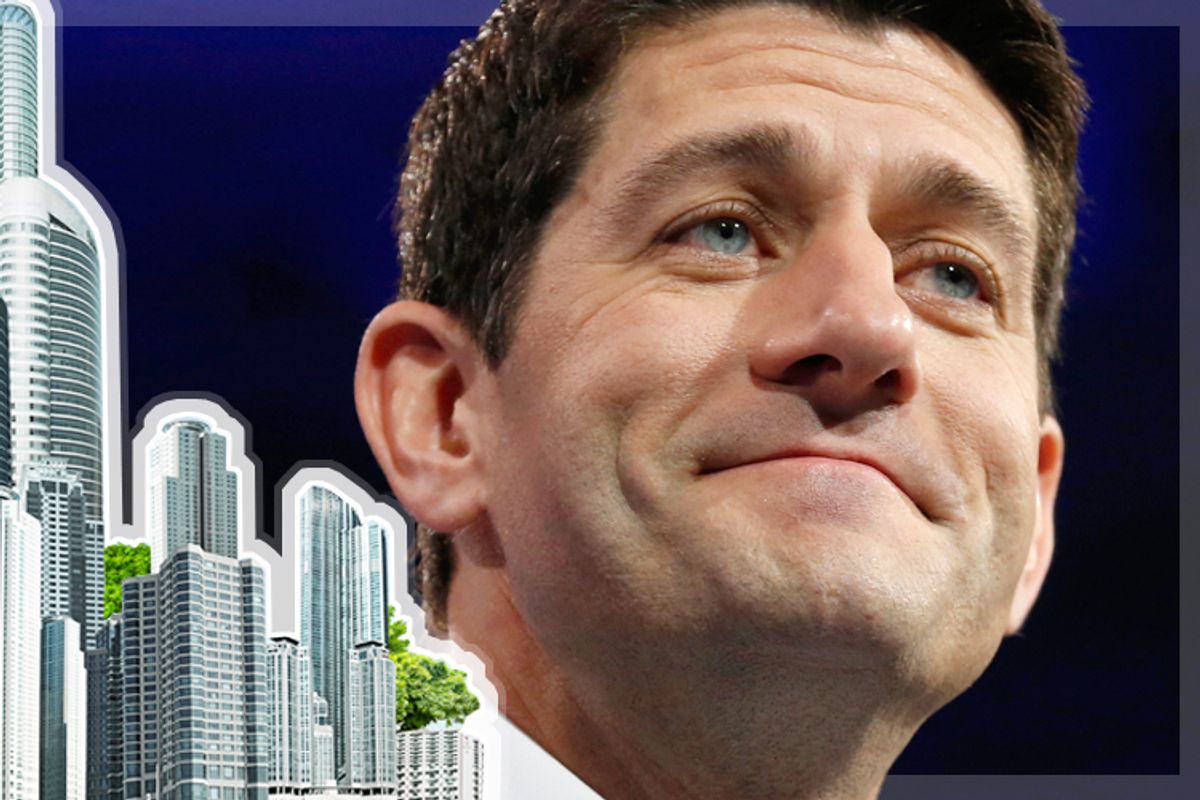 The extensive building achievements of Robert Moses, New York’s mid-century planning czar, are often ascribed to the master builder’s keen grasp of power. That’s a thesis of Robert Caro’s grand and scathing biography, "The Power Broker," and indeed, Moses’ official résumé (at one point he held a dozen offices simultaneously) was matched only by his fearsome, tacit influence. He built 13 bridges, 416 miles of highway, and 658 playgrounds in New York City alone, and even more beyond the city's limits. In the state of New York, the value of his projects totals $183 billion in 2014 dollars.

How did he do it? Power, sure. But whose? It was no accident that the apex of Moses’ authority coincided with the biggest public works project in the history of the world. Appointed in 1946 to a position of his own writing, City Construction Coordinator, Moses became the chief negotiator between New York and Washington just in time to corral billions in federal grants for his projects. Nobody submitted proposals and plans faster than Moses’ team, and the opposition at home was forced to argue not only against the Coordinator’s ideas, but also against the funding they had been granted. By 1957, New York had spent twice as much public money on urban renewal as the rest of U.S. cities combined.

If his blueprints weren’t approved, Moses often warned, the chance would not come again. He was right, but for the wrong reasons. Moses’ power did not last forever. Neither did Washington’s interest -- misguided though it may have been -- in the American city.

Fifty years later, the philosophy that informed the highways and housing projects of that era is starting to look like a historical anomaly. American downtowns are busy again. Density is valued; driving is not. Multi-family construction is booming. The American city is in its best shape since mid-century.

But twin crises, in the provision of housing and transportation, threaten that success. Neither is unprecedented. The seeming absence of federal concern, however, is – at least in our lifetimes.

First, a growing number of Americans, particularly renters, cannot afford the cost of shelter. How bad is the situation? Twice as bad as in 1960, at the dawn of the Great Society reforms. At that time, one in four renters paid more than 30 percent of their income for housing. Today, that number is one in two. According to the Harvard Joint Center for Housing Studies, rents rose six percent between 2000 and 2012, while the median renter income fell 13 percent.

The affordability crisis, moreover, is not confined to red-hot property markets like New York City, where 48,000 people signed up for 98 new affordable units this week, or San Francisco, where not a single unit of housing is affordable on the median public school teacher salary. In Chicago, median monthly rent jumped by 17 percent between 2000 and 2010, even as population declined. Even Akron, Ohio, often cited as the epitome of an affordable place to live — Rust Belt, shrinking population, high unemployment — is struggling with housing costs. Shaun Donovan, the secretary of housing and urban development, has said this is "the worst rental affordability crisis that this country has ever known.”

The transportation problem is simpler to grasp. Thanks to rising standards for gas mileage and the marginal decline in driving miles, the federal gas tax no longer produces the windfall it once did. (It doesn’t help that the tax hasn’t been raised since 1993.) That means the Highway Trust Fund, which has bankrolled nearly every road in America, will go bankrupt next year. America’s aging fleet of bridges, tunnels and roads will suffer for it; new transit projects will become even more unlikely.

Last week, the New York-based Regional Plan Association held its annual assembly, which included a panel on paying for transportation. “I think this committee should be called ‘Praying for transportation funding,’” quipped ‘Gridlock’ Sam Schwartz, the former traffic commissioner of New York. It begins to seem likely the burden of funding infrastructure will fall on states and cities.

“We have been reliant on federal funds for housing and transportation for most of the last century,” the RPA research director Christopher Jones told me over the phone this week. “Those funds are already well short of need — and are being reduced even further.”

Or so you might think, coming from a European democracy or having read an American history book. But in today’s legislature, dominated in spirit if not in numbers by the anti-spending, anti-tax Tea Party, there are no solutions.

You might think that Wisconsin Rep. Paul Ryan, who has been doggedly marching through an Inner City Poverty Tour, might be ready to offer some sensible prescriptions for the maladies of urban America. Alas, it seems Ryan’s efforts have been as unproductive as they were uncomfortable. His most recent “Path to Prosperity” budget decries raising the gas tax; rather, it suggests America bring its infrastructure spending into line with existing revenues — a recipe for collapsed bridges.

On housing, Ryan makes no mention of how sharply the cost of living has risen. Instead, he suggests scrapping the Community Development Block Grant Program, one of the few remaining federal commitments to funding affordable housing in cities.

Across the aisle, the president has some good ideas. His new transportation bill proposes to replenish the Highway Trust Fund with corporate tax reform, a fairer funding mechanism than the sales taxes that have become popular at the state level. It also includes a provision allowing states greater freedom to toll interstates, which creates a new avenue for funding transit and other infrastructure. (Toll money, in addition to federal largesse, was the other great source of Robert Moses’ dollars.) But there’s no evidence Republicans will let such a bill go anywhere.

On housing, the administration has one big housing success on its record: The number of homeless people in America has fallen dramatically through the recession. But for the most part Democrats find themselves fighting to preserve market-friendly affordable housing concepts developed under Republican administrations decades ago. Public housing towers may be the troubled icons of affordable housing, but there are in fact fewer public housing units today than in 1975. Instead, America’s struggling tenants rely more and more on rent vouchers and set-aside units created under the Low Income Housing Tax Credit.

Both are obviously insufficient. Barely a fifth of eligible households receive rental subsidies, as the program’s modest expansion has not kept pace with rising rents and declining incomes. (Unlike, say, food stamps, vouchers are covered by discretionary funding — not everyone in need receives one.) And the supply-side LIHT credit, which is responsible for 90 percent of affordable rental housing built the U.S., has its own problems. Its standards of affordability can be laughable. It isn’t producing nearly enough affordable housing (and likely never will). And LIHTC apartments are low-income for 30 years. That seems like a long time, but most American cities are now fighting an uphill battle to add affordable housing even as their existing stock dwindles beneath their eyes.

That’s why you hear New York mayor Bill de Blasio promise to add and preserve 200,000 new units of affordable housing. His predecessor Michael Bloomberg may have “financed” 145,000 units of housing — but more than two-thirds of those units were already affordable. It’s better than nothing, but relative to the size of the urban housing problem, the mayors have their fingers in the dike while the water rushes over the top.

Washington could easily help. According to the Center on Budget and Policy Priorities, the federal government spends nearly three times as much on tax subsidies for home ownership (largely benefiting households with incomes over $100,000) as on rental assistance. But there’s a real reluctance, fueled by real estate interests, to admit that renting is anything more than an unfortunate transitory period on the path to buying a nice home in a subdivision called River Oaks or Rose Hill. From the perspective of the construction industry, the fact that multi-family construction is at its highest level in 30 years is bad news. Washington’s policies haven’t caught up to the way people live.

And so the burden falls to state and cities. A voter-approved sales tax, among the most regressive ways to raise money, is funding capital construction of transit lines in Los Angeles. A similar measure will pay for roads in Missouri. To meet demand for affordable housing, Bill de Blasio will have to grovel to luxury developers, trading zoning concessions for affordable units at a scale that is comically short of what’s needed.

To some extent, this is a familiar story about Nixonian federalism, about metropolitan regions taking control of their own destinies – what Jennifer Bradley and Bruce Katz call the Metropolitan Revolution.

Katz believes that the shift in power is for the best. “We’ve assumed this notion that the federal government is all-powerful and really needs to be involved to resolve big challenges — and for a portion of domestic challenges I reject that notion entirely,” he told me. “This country is organized differently from other countries, with a lot more agency and power at the local level, and that’s good.” The federal interventions of mid-century, he remarked, had disastrous effects on the urban areas they were supposed to help. Who better to address urban problems than cities themselves?

It’s a shame that Ryan and the Republicans don’t take more interest. Though Republicans have never had less success in cities than they do now, it doesn’t have to be so. A smaller federal government could suit ascendant metropolitan regions eager to take control of their own destinies. But there are structural barriers preventing that from happening – not the least of which is the familiar divide between cities and suburbs.

More than ever, cities are on their own. The question is if they can marshal the resources to make that independence productive.