Neil deGrasse Tyson vs. Christmas: Why creationists are freaking out over "Cosmos" yet again

In what is quickly becoming a weekly ritual, religious fundamentalists are super-duper angry at Tyson 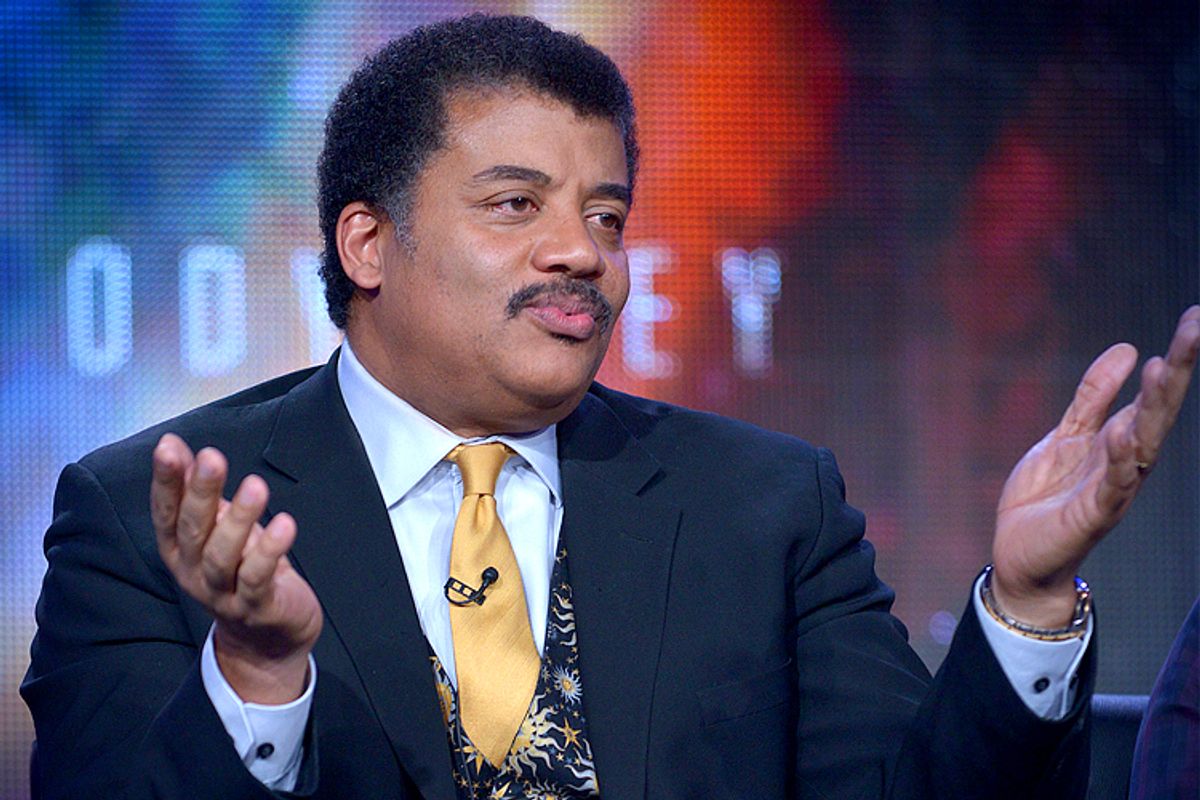 Neil deGrasse Tyson and the producers of "Cosmos" have been under constant fire from creationists since the very first episode shared the beauty and wonder of our universe without crediting a higher power for any of it.

Each week, after the broadcast of each "Cosmos" episode, an online battle ensues between science supporters and creationists across various platforms, from Twitter to message boards. What creationists tend to lack is evidence for their claims. What do you do when you can't win the argument against scientists? Simple: you attack the non-substantial parts of "Cosmos," the ones that do nothing to change the show's message.

Jay Richards, a senior fellow of the Discovery Institute, a prominent organization tasked with defending religion against scientific explanations for natural phenomena, decided to attack Tyson in the Federalist. He went after Tyson, Seth McFarland, the writers and even the producers of "Cosmos" for some minor historical blunders, claiming these mistakes discredit the whole show.

The producers spent one fourth of the first episode telling a misleading story about Giordano Bruno, a sixteenth-century Dominican burned at the stake for a laundry list of unrepentant heresies. He wasn’t a scientist and had virtually nothing to do with the history of science. But "Cosmos" needed a martyr for science, and since there were none available, Bruno would have to do.

"Cosmos" was not in need of a martyr for science. But if they were looking for examples, there are plenty. Top of the list would be Galileo, who was put under house arrest and forced to recant his claim that the earth revolved around the sun. While he may not have been killed for his belief, it is very damning that the church would ruin someone’s life for something we know is so obvious today and that does nothing to threaten religious belief, only doctrine.

What Richards and other defenders of organized religion do not like is that Bruno was highlighted as being killed as a heretic, yet they take no issue with his death, only that they don’t believe it had anything to do with science. Regardless of what the church killed him for, they killed him for speaking against the church; this is a stain on their history and "Cosmos" did nothing wrong to highlight historical examples of religions executing people for their beliefs.

Richards also took issue with the treatment of Christmas on "Cosmos." Tyson claimed in Episode 7—and rightfully so—that almost all Christian holidays are stolen from pagan or other holidays from the past, and they directly focus on Christmas, one of the most sacred of Christian holidays.

In the Easter Sunday episode about how modern scientists determined the true age of the earth (and about the tenuously related twentieth century controversy over leaded gas), they inserted a segment about Christmas. We learn that the holiday celebrated by a couple billion Christians is really a camouflaged take-over of Saturnalia, the High Holy Day when ancient Romans celebrated Saturn, the god of agriculture. How is this relevant? Well, Saturn is also the name of a planet, which is part of the solar system, which is part of the cosmos.

Richards' religious views blind him from what the show was highlighting. What Tyson and writers actually set out to do was explain why creationists are wrong for trying to proclaim the age of the earth based on Biblical scriptures. To do so you must trust that the dates in the Bible are accurate and historical events, yet an event like Christmas holds no weight. The holiday itself isn’t historical in the sense of Jesus' birth marking a particular date in time, because Romans had been celebrating that time of the year for centuries before.

There is an abundance of evidence that Christians created Christmas to compete with Saturnalia. Once you understand that the timing of Christmas appears to be a marketing move, you quickly realize dating the age of the earth based on these types of events is useless.

Richards again, relies on low-level thinking to attempt to drive his point home:

Most likely, the dating of Christmas has a prosaic theological explanation: it’s when early Christian thinkers thought Jesus was born. For reasons that aren’t important here, they inferred that Jesus’s conception took place on March 25. As Matt Salusbury explains in History Today, “Early ecclesiastical number-crunchers extrapolated that the nine months of Mary’s pregnancy following the Annunciation on March 25th would produce a December 25th date for the birth of Christ.”

It is easy for Richards and theologians to attempt to change their story after the fact and root in some special historical research, but you would be hard-pressed to find non-creationist, non-fundamentalist Christians who would reject the idea that Christmas is an adaptation of Saturnalia to offer a competing holiday.

It is already silly enough that Richards assumes you can use a book as full of flaws as the Bible as an accurate dating method of the age of the Earth, but Tyson and the "Cosmos" writers really drove this point home in a clever jab at creationists.

These are not historical mistakes happening through "Cosmos;" this is nothing more than creationists who do not follow the real history of the world and only subscribe to their own blinded history, where facts are unimportant and only stories that fit into their predetermined narrative are taken seriously.