Princeton, check your privilege (or at least your PR strategy)

From Susan Patton to Tal Fortgang -- what is going on at Princeton? 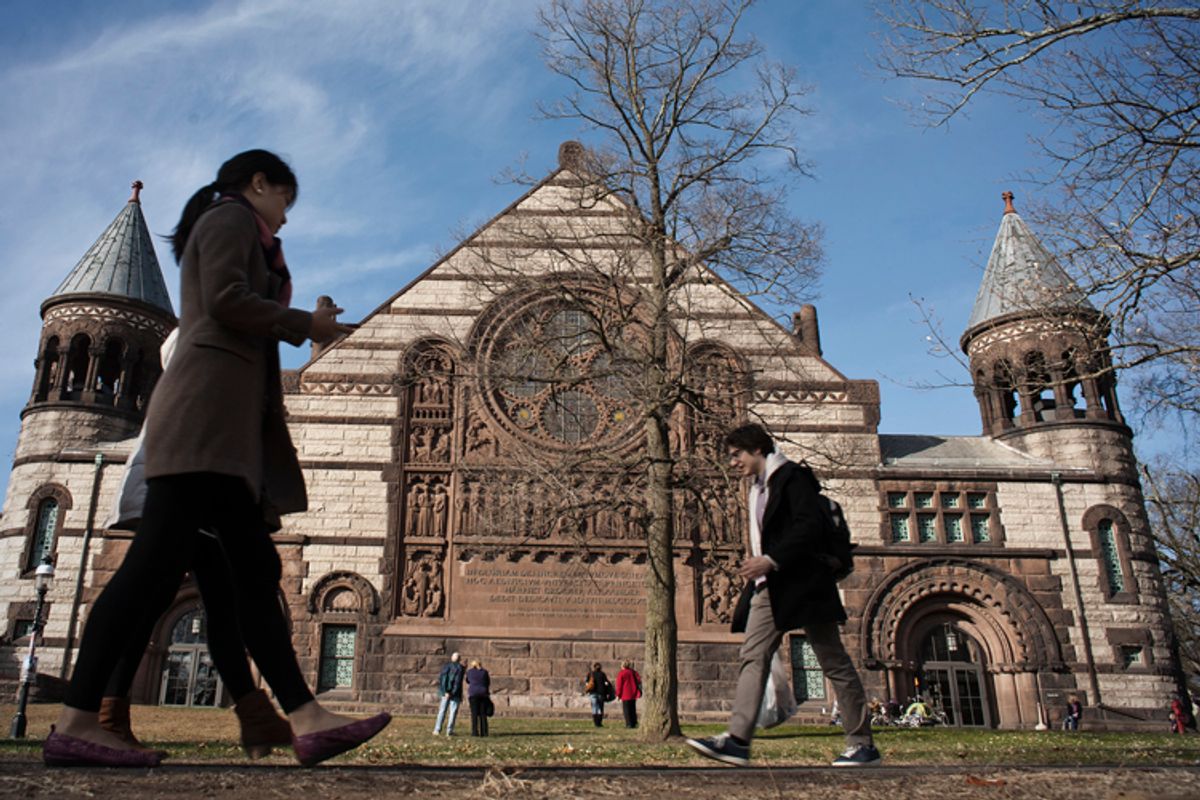 It seems as though there's a particular sort of affliction among those who bleed orange. Princeton has become, thanks to two of its most vocal affiliates, ground zero in an unsavory debate over class privilege.

There's "Princeton Mom," of course, the opinion columnist Susan Patton, who cast a Princeton degree as important for women only insofar as that they can snare a man of good breeding. There's the pesky matter of Princeton repeatedly facing civil rights lawsuits for alleged discrimination against Asian applicants. And now there's Tal Fortgang, the freshman who felt empowered to write an op-ed for a campus paper (later republished by Time) defending the concept of "white privilege" -- and in so doing, seemed to wildly misunderstand it.

In an era during which more or less anyone willing to speak an incendiary-enough opinion can set the Internet on fire at least briefly, every elite academic institution seems to have its turn for a controversy these days. There was Amy Chua, the Yale professor with two books under her belt about the various abuses to which she subjected her high-performing children, floating bizarre theories about the specific ethnic groups that correlate with success. There were the comments that led to Lawrence Summers's resignation as president of Harvard -- suggesting that women lacked a natural aptitude for math and science. Reading Fortgang, though, one senses that if he went to Princeton simply because it was a safer route to material success than funneling his college fund into Powerball. Not merely is he angry at being asked to contemplate other humans' experience of life, he, like Patton before him, is interested less in academic inquiry than in social advancement as an end in itself.

Princeton cannot control the public statements made by its students (and parents of students), and nor should it try to. But it's amazing how neatly these unofficial spokespeople keep stepping into the school's pop cultural caricature as a status-obsessed carnival of eating clubs and lawn parties. What Princeton seems to do uniquely well is to train people to say "I went to Princeton." (Consider Reagan's Secretary of State George Shultz -- he of the Princeton tiger tattoo!) And it hardly seems ideal that the university's place in the public conversation right now has absolutely nothing to do with academics and everything to do with embarrassing op-eds. "Princeton" is an adjective attached to a woman urging other women to compete for the most successful men in order to enjoy comfortable lives. And now, to a teenager bragging in print about how his ancestors had the unique idea to work hard, one other people's ancestors evidently didn't. Check your privilege, Princeton. Or at least: check your PR strategy.