"True Tori" should end the era of celebrity mom-ism

From Gwyneth to Jenny to Tori: It's time for stars to stop building their brand on motherhood 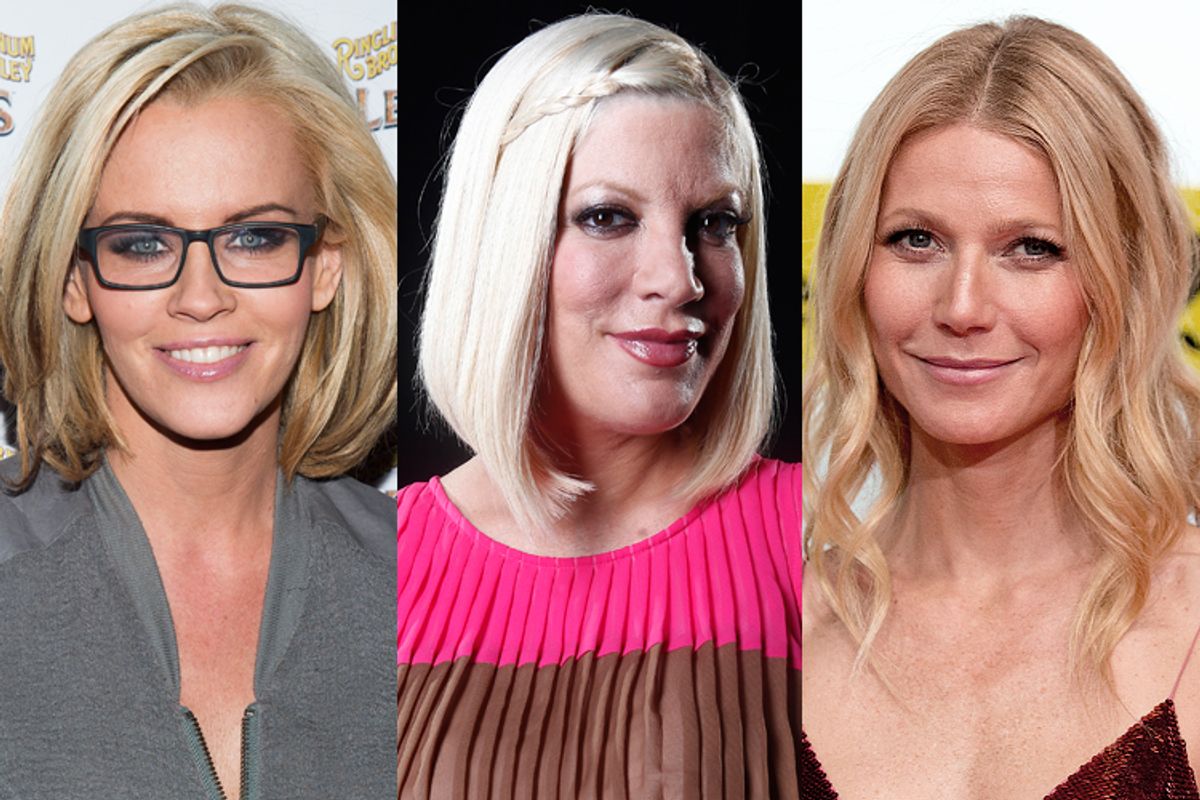 Tori Spelling has built her career, as of late, on a kind of supermom-ism -- she’s published books with titles like “uncharted terriTORI” (about building a life with her growing family) and “Mommywood” (ditto). And she's clearly not the only one. Jenny McCarthy, Alicia Silverstone, Gwyneth Paltrow, Jessica Alba: this is the age of the self-branded celebrity supermom -- adamantly convinced that, however dubious or new-agey their tactics, they are the bearers of best practices for motherhood at large. But Spelling's new Lifetime reality show, "True Tori," is a new low. Watching “True Tori,” one senses something more meaningful for the culture than a game Tori Spelling may or may not be playing with her own image -- it is, or should be, the effective end of the era of mom-lebrity.

Spelling began her climb to marginal fame as a star of “Beverly Hills 90210,” a series produced by her Hollywood-mogul father, Aaron Spelling. She found it difficult to claim her place as a thespian (though she’s been very good in at least one indie film) and, since her marriage to fellow actor Dean McDermott, has made a second and third career as reality-show starlet and would-be lifestyle guru. In service of the latter, she has a website, which most recently featured ideas for “Cinco de Mayo Crafts” and “Peanut Butter and Coconut Balls.” In service of the former, she’s appeared on “Tori & Dean,” a reality show documenting the pair’s happy union and their life with kids.

The seams began to show when McDermott was accused in Us Weekly, a magazine with which the Dean-McDermotts had previously enjoyed a mutually beneficial relationship, of cheating on his wife. A reality show documenting Spelling’s life alone as her husband went to a live-in rehabilitation facility (very) quickly followed. The details of just how real all of “True Tori” is have been hashed out in a superlative and compelling speculative post on Jezebel. But one thing is obvious: Tori Spelling should not be parenting on TV.

This is clearly not to say that mothers in general ought not to have a place in popular culture. But Spelling’s place, like so many of her celebrity counterparts', is that of the celebrity supermom -- her livelihood up until “True Tori” had been based on a reality show about her life as a wife and mother and a website about how to plan kids’ parties. “True Tori” exists, in its largest part, as a document of how good a mother Spelling is -- and as such, it sheds light on the whole sad spectacle of the celebrity mother.

Spelling is okay with broadcasting her family photos between scenes of the show, or with allowing the cameras to follow her on her morning commute taking the kids to school, or taking her eldest son to a party-supply store to pick out a piñata. And in those contexts, she seems like an extremely good and devoted mother. But then there are the multiple scenes, in the first two episodes, in which Spelling discusses her marital strife and tabloid rumors openly in front of her four children, to willing friends or to her “gusband.” (That means “gay husband.” We’ll let this one go.) If this show was designed as a bulwark against tabloid attacks, it's not a very successful one.

“I did the only thing I could do,” Spelling tells us of her reaction to the news of her husband cheating, in the first episode of “True Tori.” “Which was to go on and be a mom.” Spelling is perpetually vindicating herself, in her speech, as a person entirely devoted to motherhood, and perpetually exposing her family to the sort of scrutiny that cannot possibly be productive. No wonder one of (one of!) the therapists who appear on air has chosen to have a blurred face on-camera.

Will celebrity mothers ever learn that putting their families on-camera is unwise -- that it only allows people to judge how good, or bad, or calculating, you are? It's particularly disturbing to hear Spelling explain that her four children know what paparazzi are but not why they follow her family. So how will they react to their parents’ therapy sessions being aired to an audience waiting to speculate on just how real the remorse is? Or their own appearances on camera?

Kate Gosselin has been through the public-relations wringer as she’s attempted to keep her career as a media personality afloat after the dissolution of her marriage onscreen. Gwyneth Paltrow made her success as a home cook to little Apple and Moses explicit in her cookbooks and Goop newsletter -- and the schadenfreude, following her “conscious uncoupling,” was deafening. Jessica Alba and Alicia Silverstone, actresses who’ve made second careers for themselves as lifestyle guide authors, ought to be holding their respective breaths. Celebrities who build their brands on projecting perfect motherhood are pretty much destined to fall.