What would Jesus do? Remind everyone they're going to hell apparently 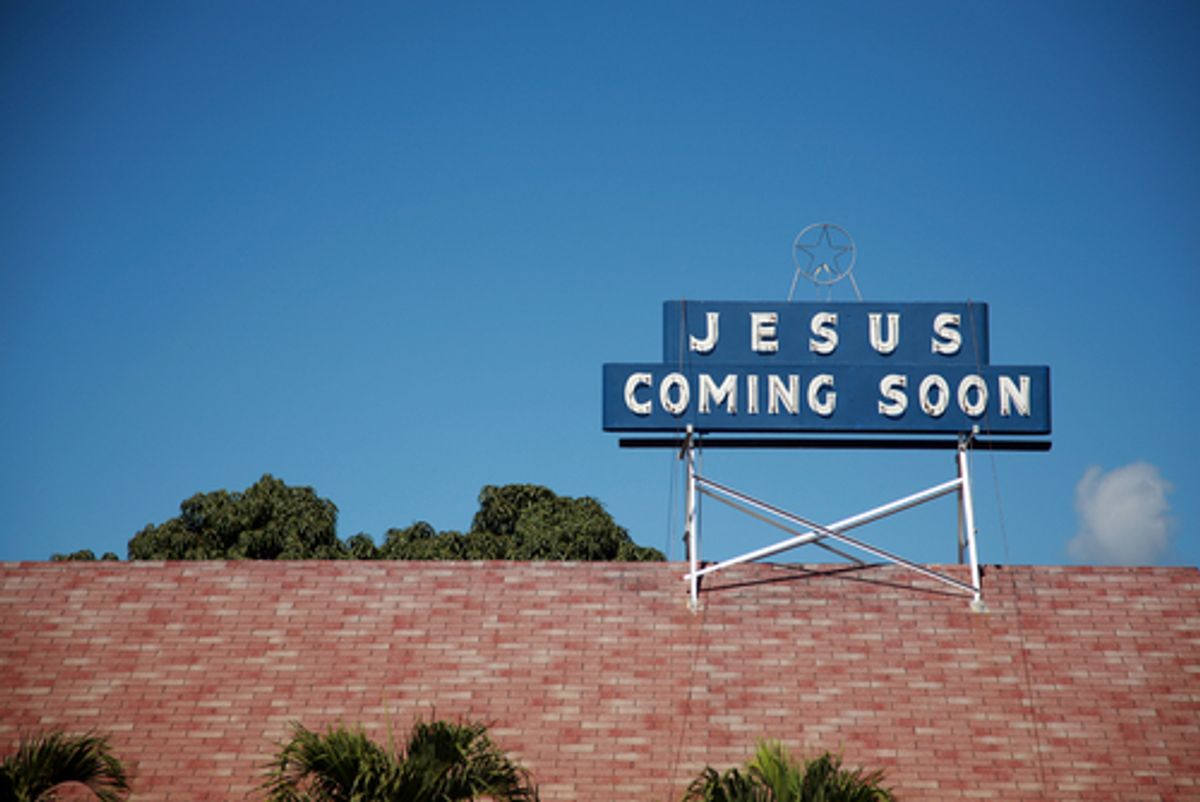 Apparently, when some conservative Christians ask themselves, "What would Jesus do?" the answer they come up with is, "Put up absurd, offensive billboards, preferably reminding passersby they're going to hell."

We've rounded up some of the more controversial billboards that have grabbed headlines lately.

1. Jesus hates tolerance almost as much as he hates you!A billboard in the small town of Clyde, North Carolina doesn't seem to get the difference between verbs and nouns. It asks Coexist (verb)? Tolerate (verb)? Sexual perversion (adjective and noun)? But it sure knows what God would say about all three and that's "NO!" Like mortals, God uses all caps when he's angry. This billboard doesn't hide behind that "hate the sin, love the sinner" stuff. This is straight-up, "hate the sin, and refuse to coexist with and tolerate sexual perverts." It's not clear how one goes about doing that. Stoning?

2. Jesus is (at least trying) to watch you: Just this past Easter Sunday, the fire department of Farmington, New Mexico, responded to an act of vandalism. The Roman Catholic Churches of San Juan County had decided to place a billboard with Jesus’ face right outside of an adult book store. Eschewing the cryptic tradition of the parables, the billboard had a more direct message: “Jesus is watching you.” On Sunday, passersby noticed something lodged between Jesus’s disapproving eyes: an arrow. Police have still not discovered the identity of the bow and arrow owner. But even if he's not found on this earth, there will be hell to pay later.

3. Atheism creates war: E.F. Briggs, a reverend, and as you’ll see, amateur logician, put up this billboard in West Virginia. Briggs makes his intended audience crystal-clear: “Attention: Lunatics Atheists & Their Lawyers.” Then he makes some totally unfounded and nonsensical claims, which he presents as if he were René Descartes: “Anti-God is Anti-American. Anti-American is Treason. Traitors Lead to Civil War.” So, basically, if you don’t believe in God, you have the blood of a civil war on your hands. I wonder if Briggs considered the secessionists in the Civil War godless traitors. Something tells me he didn’t.

Interestingly, the company that placed the billboard, Lamar Billboard Company, refused to sell billboard space to the DNC. After Rep. Jean Schmidt, R-Ohio, called decorated veteran and former marine John Murtha, D-Penn., a “coward,” the DNC prepared a sign that said, "Shame on You Jean Schmidt.  Stop Attacking Veterans. Keep Your Eye on the Ball—We Need a Real Plan for Iraq." Lamar refused to run the DNC sign because the company doesn’t run “negative ads.” If only the DNC had followed the positive example of Briggs’ kinder and gentler treason-convicting billboard.

4. From God’s lips to our… billboard: It looks like lots of Christians are comfortable speaking for God these days. Take this Fort Lauderdale ad campaign funded by an anonymous donor, which consisted entirely of billboards with quotes that God never uttered in the Bible. Turns out God isn't a big fan of the whole Big Bang Theory. You'd think he'd want to take credit for it. But apparently not.

5. Once upon a time in a land far, far away, there was the magical thing called evolution: God's not the only one totally not impressed by the Big Bang Theory or the whole evolution thing. According to this billboard in Kansas City, "Evolution is a fairy tale for grownups." Except that it's based on fossils, facts and science, not fantasy. But, yeah. Kinda.

6. Keep Christ in Christmas! This is a fairly straightforward billboard brought to us by the Knights of "ColumbusLong." I think they mean "Knights of Columbus Long Branch," which is in New Jersey, a state that needs all the Christ it can get given its proximity to the atheists, gays and other followers of the Anti-Christ who populate New York.

7. Keep... baby Jesus fetus in Christmas? This sign, however, is a little less clear. According to this anti-choice Cleveland organization, Christmas starts with Christ, so we should keep Christ in it. And it also starts with baby Jesus as a halo-rocking fetus, so I guess we should keep him around too? So, no aborting baby Jesus on Christmas. Which sucks for atheists because that's apparently how they celebrate the holiday.

8. Atheism will literally shoot you in the face: That's funny. I always thought there was an extraordinary amount of violence based on religious conflict, not atheism.

10. Are you confusing apes with monkeys? These billboards were put up by the organization Who Is Your Creator, which aims to "raise awareness of the serious misrepresentations and lack of empirical science for the Theory of Evolution and its creation story for the origin of the universe, the origin of life, and common descent." They'd probably have a lot more credibility if they didn't conflate monkeys with apes, since we are more closely related to apes, not monkeys. And we didn't actually evolve from apes, we evolved from a shared ancestor. But one thing at a time.