Their Expectation vs. Reality meme did not go over well 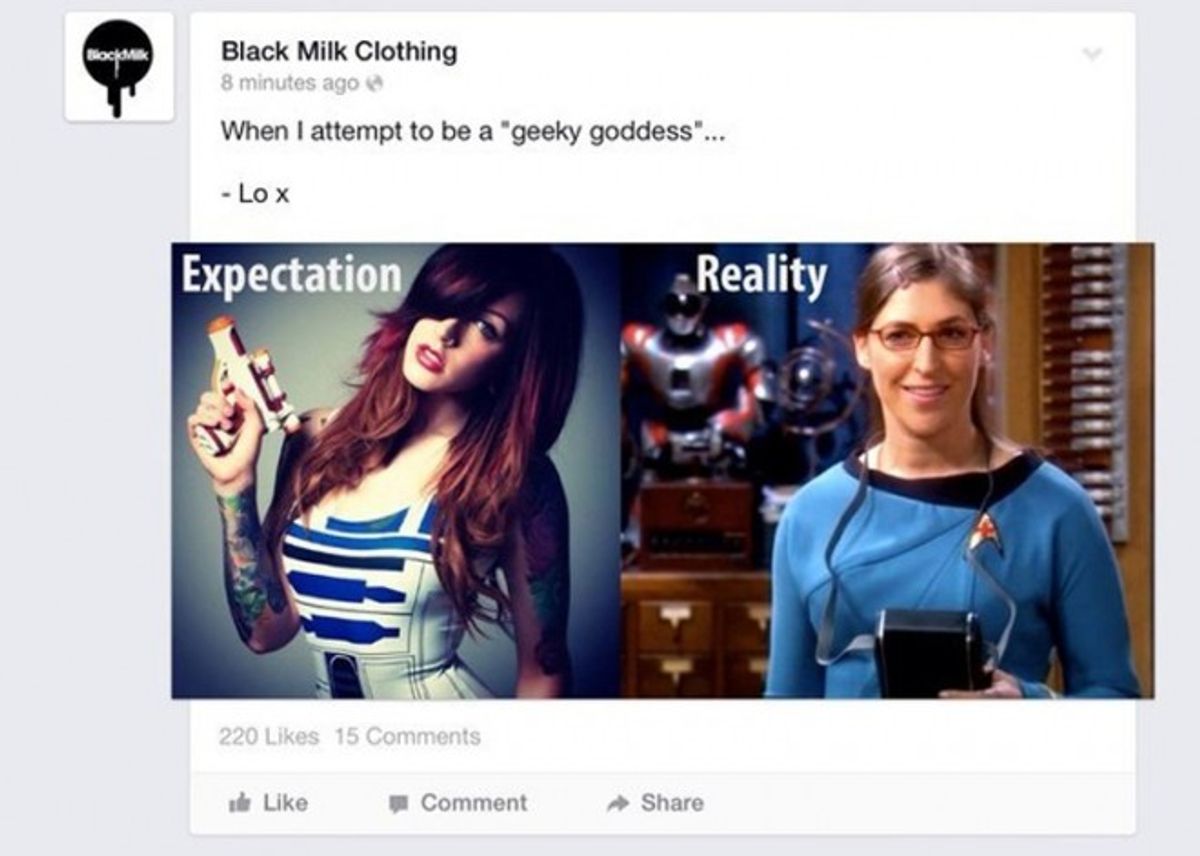 After first defending itself, Black Milk, a "geeky" online Australian clothing retailer for women, has apologized for an offensive Facebook post it shared in an effort to celebrate "Star Wars" Day, May 4th (May the Fourth Be with You).

The post, shown above, attempts to capitalize on the Expectation vs. Reality meme: It pits the ideal outcome against the actual outcome, and the comedy is derived by seeing how different (and disappointing) the actual outcome is against the desired outcome. Several Black Milk commenters quickly pointed out how putting a model in the "Expectation" category against Amy Farrah Fowler, Mayim Bialik's character in "The Big Bang Theory," is offensive and sexist because it sends the message the something is wrong with looking like Bialik in her "Star Trek" outfit (or with not looking like Black Milk's model).

The post garnered even more attention, however, when Black Milk responded to the criticism by censoring comments and blocking members of its fanbase. The International Business Times reports that "dozens of users, including moderators of regional Black Milk community groups, were also banned from posting." (Several of the company's missteps are detailed here by one consumer.)

Eventually, the company -- which relies on social media, as it retails exclusively online -- took down the post. But they didn't seem to understand why the post was offensive, or why blocking loyal customers was offensive. Instead, Black Milk was right, and anyone who disagreed was wrong:

"Hey guys, we have had a really good think about this situation and we have come to a decision. We plan on deleting this post (in a few minutes) because we feel it is giving a platform for hateful comments about the brand we know and love. All that we want to do is create beautiful clothes, not deal with internet raging. So let's close this off. In terms of the major issues people have mentioned, here are our feelings:

1. This is a joke, harmless, not hateful. We like to have a joke and poke fun at ourselves. Be cool with it.

2. Yes, we removed a lot of negative comments because we felt like they had overstepped the mark! We are constantly hearing from our customers that our fan page has become a place of complaining and attacking, and they are sick of it! So we are working at trying to communicate that complaining and negativity all the time is not okay. We have the right to do that, and people should respect that.

3. Yes, people were banned, again, because we felt they had overstepped the mark and were being disrespectful. You can share your opinion, but you can't attack our staff. We love them too much. Of course, many people are saying that they were banned for "respectfully sharing their opinion." But there are two sides to every story.

4. We LOVE our customers, but yes, we believe that if you get really upset by the way we do things, you should probably move on and not be a part of what we are doing. That's not mean, that's just to save all of us more frustration!

5. "Why can't you just admit that you were wrong and apologise. Is it so hard?" Because we have integrity. Because we didn't do anything wrong, so we have nothing to apologise for! We stand up for what we believe in. People can have differences of opinions about what is right and wrong, right?

Hope that makes sense. Thanks so much to all the kind and supportive comments (and hugs) from girls all over the world who are looking forward to a much more positive BM space.

After further backlash, Black Milk has issued a thoughtful apology on its Facebook page -- the one that customers would have loved on Sunday. "We made a mistake and we apologise sincerely," wrote head of sales and marketing Cameron Parker, who took responsibility for the social media, along with senior management. "The intention behind the meme was to share a personal experience, and never meant to offend anyone. We misjudged the line between funny and offensive, and underestimated the true impact it would have. I am so sorry."

A candid apology is better late than never, but now customers will have to think twice about how much Black Milk really knows about empowering women, as it has attempted to do since 2009.