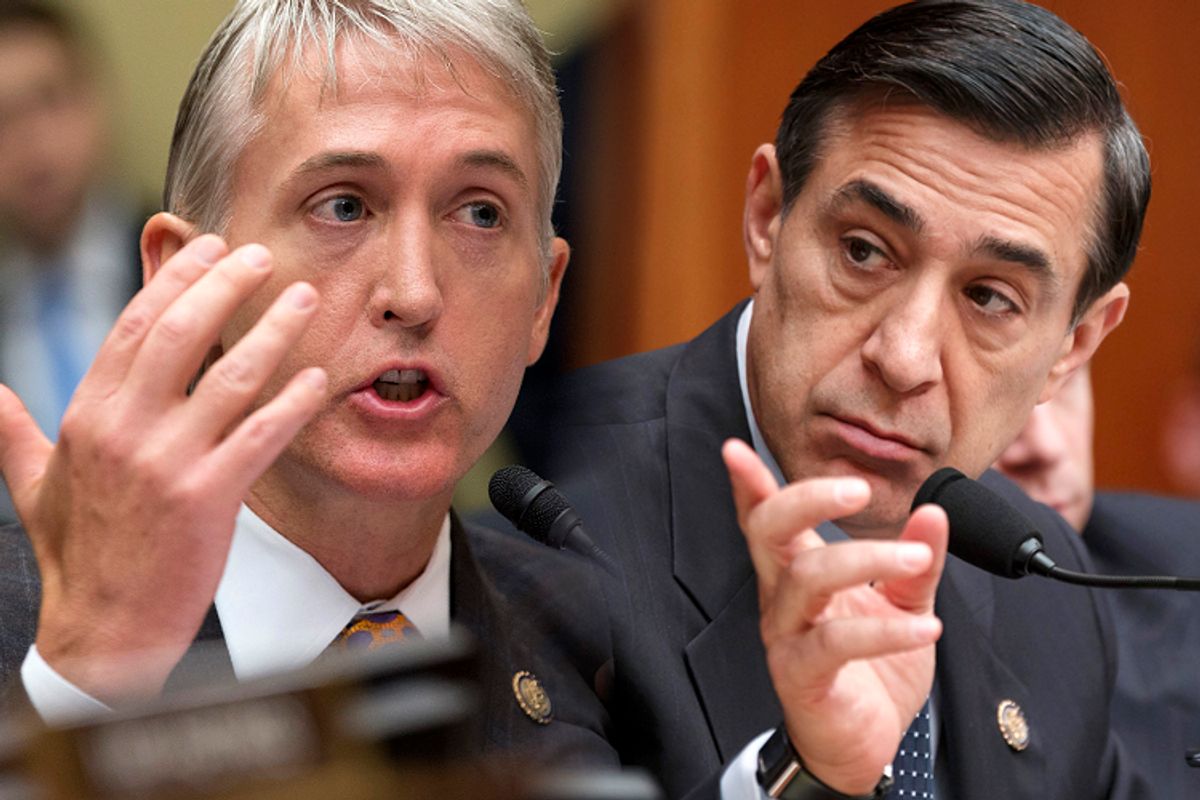 House Minority Leader Nancy Pelosi is trying to make the GOP’s latest Benghazi theater more than partisan drama by asking Speaker John Boehner to appoint an equal number of Democrats and Republicans to the new "investigative" panel he's convening. The speaker is unlikely to do that, so Democrats should boycott this latest GOP fundraising stunt.

Five House committees have already investigated the Benghazi tragedy and issued biased reports; there have been two Senate committee reports plus the Accountability Review Board’s findings. The bipartisan reports found errors on the part of State Department personnel and recommended staffing and other changes. But because none of the investigations were able to charge then-Secretary of State Hillary Clinton with incompetence, or prove that President Obama tried to cover up the truth to get re-elected, Republicans won’t believe them, and insist there’s more to “investigate.”

Thus we have the latest House Benghazi stunt – and Democrats should stay away from it. There’s precedent for boycotting such a panel: Dems did so in 2005, when Republicans organized a sham “investigation” into how President Bush handled the Katrina catastrophe, when it became clear the effort was meant to be a whitewash, not a thorough probe.

I admit, Benghazi is to progressives what climate change is to conservatives: No matter how much the right wing shrieks about it, and purports to have new evidence of wrongdoing, we don’t believe it. The difference is, progressives are right. The notion that a newly uncovered email from national security communications staffer Ben Rhodes “necessitated” this latest investigation is another partisan cover story.

On one level, the new committee is actually a rebuke to histrionic House Oversight Committee chair Darrell Issa, whose many forays into the swamp of Benghazi conspiracy theories uncovered nothing to hurt Democrats, not even the Rhodes email. As ranking Democrat Elijah Cummings has pointed out, Issa denied Democratic members the most basic tools with which to participate in his committee’s sham investigation:

Over the past year, House Republicans have conducted their Benghazi investigation in a completely partisan manner by denying access to hearing witnesses, leaking cherry-picked excerpts to create a false narrative, issuing unilateral subpoenas without Committee votes, releasing multiple partisan staff reports, excluding Democratic Members from fact-finding delegations to Libya in violation of the Speaker’s own rules, and launching unsubstantiated accusations that turn out to be completely false. So I do not have much faith that a new select committee will be any different.

The new committee won’t have any more power than Issa’s did. And there’s no reason to believe chairman Trey Gowdy will be smarter or fairer than Issa (check out Simon Moloy’s profile here.) Gowdy is the Oversight Committee member who has set his hectoring of witnesses to action-movie music and posted it to You Tube. He is likely to out-Issa Darrell Issa.

There’s possible political risk in boycotting the Gowdy charade. “Some of these hearings are going to be televised,” political scientist Norman Ornstein told the Washington Post's Greg Sargent. “The question is, does it make more sense to be in there, participating in the process and pointing out Republican overkill again and again, or does it make more sense to further destroy the image of the committee by staying out of it?”

It’s true that as the Oversight Committee’s leading Democrat, Cummings has been able to regularly thwart Issa and counter the chair’s allegations in the media. But he did so at a constant disadvantage, since he was shut out of the investigative process by Issa. There’s no reason to expect Gowdy to treat Democrats any differently. (Cummings' office says he has not yet taken a position on the boycott idea.)

Gowdy’s committee is best understood as as a base-energizing fundraising tool for the GOP, part of what Politico's Michael Hirsch calls "the Benghazi industrial complex," engineered to damage Clinton so much she either can't run for president or decides it's not worth the pain. Of course, Benghazi fever hasn’t spread beyond the fever swamps of Obama hatred that afflict the GOP’s far-right base. But that’s enough to keep it alive, and potentially make it a potent midterm-election organizing tool. House Democrats should make that role clear by boycotting it.