The joke could have been much, much better. But a conversation about the desirability of black women is imperative 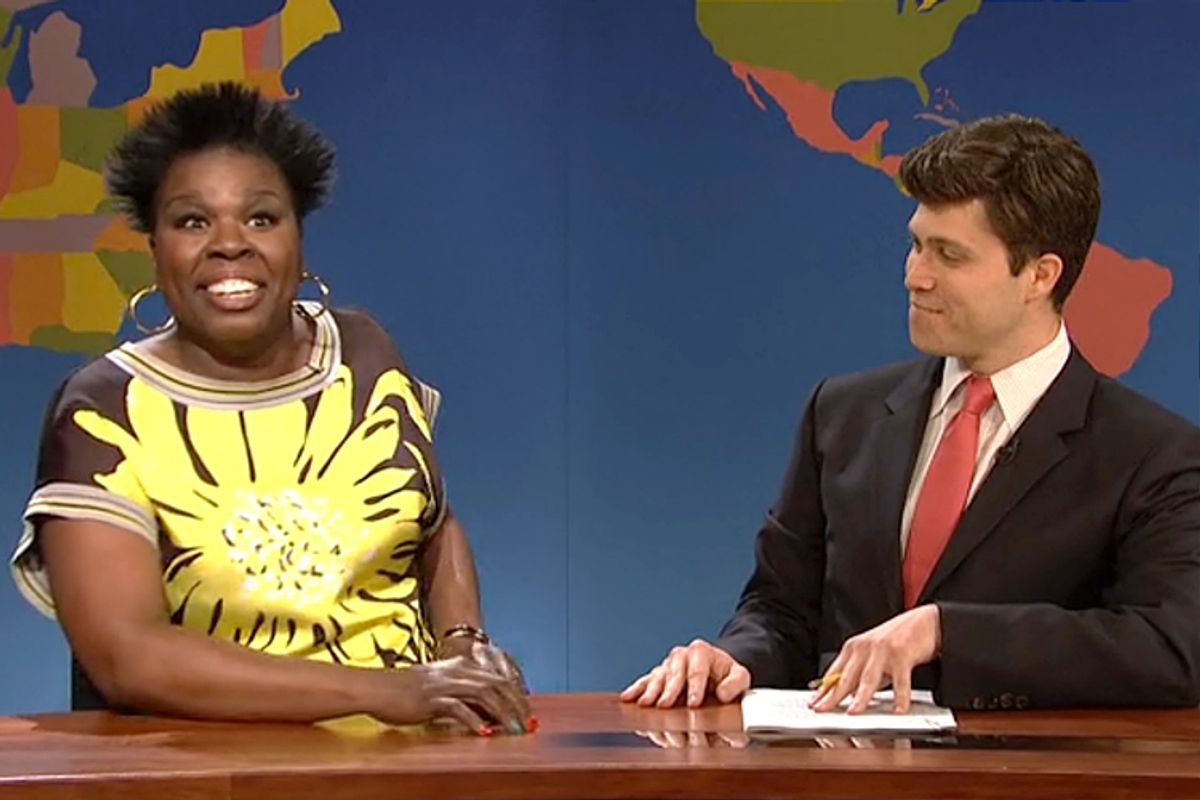 Unfortunately, having more black women writers and comedians on "Saturday Night Live" does not seem to be leading to more complex portraits of African-American women. And given "SNL’s" dubious history with regard to both racial inclusion and racial representation, perhaps this is too much to ask anyway.

Still, Leslie Jones' skit on last weekend’s episode, in which she indicated that her large size and stature would have made her a number-one slave “draft pick” to be bred with enslaved men in the plantation South is deeply troubling. As Jamilah Lemieux points out at Ebony.com, what enslaved women and men experienced was not love or desire but rape.

Jones took to Twitter to defend her position and asserted that essentially the skit was driven by her own attempt to work out her experience of not being desirable to black men. While I agree that her inherent political analysis was shoddy and dangerous, I think that her honing in on this issue of desirability is incredibly important.

First, the "SNL" bit discusses how, because of her big dark-skinned body, she would have been chosen to be a kind of “superbreeder” who could reproduce exceptionally athletic black people to do the hard physical labor of running plantations. The reality is that black women’s desirability or lack of desirability within the American body politic has been and remains deeply tied to perceptions of their reproductive capacity and choices. It is the deeply rooted perception of poor black women -- “welfare queens” -- having too many babies that they are unable to support without public assistance that influences faulty policy on the right to cut needed social programs like welfare and food stamps. Those very terms conjure images of black and brown women’s bodies, and alongside those images, deeply held disdain among American taxpayers, who see these women as a blight on the system.

At the same time, the recent broad cultural embrace of Oscar-winning actress Lupita Nyong'o has sparked a range of internal conversations among African-American women about how the embrace of this dark-skinned beauty seems disingenuous. As Dr. Yaba Blay, an expert on skin-color politics in black communities, wrote, “I see Lupita every day. I see her as often on the streets of Philadelphia as I do on the streets of Accra. I see her in my classroom. I see her at the corner store. I see her at the mall. I see her everywhere. And so do you. Only you don’t know it. If it took the media’s fixation on Lupita’s Otherness to introduce you to the beauty of dark skin, then you don’t know what you’re seeing when you look at dark-skinned women. Or maybe you don’t even see us.”

In light of what Blay argues, it is clear that Leslie Jones’ comments index ongoing struggles within black communities about the general desirability of black women with dark skin, especially if those women are not petite-sized. Lemieux reads Jones' comments about “The Lupita Moment” as a “dismissal,” but I read her comments as an absolutely justified distrust of what the Lupita Moment means.  For instance, actress Gabourey Sidibe, a dark-skinned plus-sized woman, has had a very different experience of beauty politics than Lupita has had. And what I take Jones to be saying is that just because folks are now checking for Nyong'o, this does not mean that dark-skinned black women’s cultural stock has gone up.

It would therefore be incredibly easy to write off Leslie Jones' larger premise, but I think that the convenient truth about shoddy execution of the joke and its facile analysis exempts us from having to deal with more inconvenient truths about the persistence of colorism and sizism within African-American communities. Lemieux further argues that “even if there was some shred of humor in this routine... 'SNL' is the wrong venue for it.” This comment gets to the larger question of what exactly it does mean to have black women representing black female experiences in a mainstream venue.

I, too, think Jones missed a valuable opportunity to offer an incisive, smart and sharp response to a mainstream audience that remains obsessed with talking about how romantically undesirable black women are. But it is unclear to me if there is actually a language in the mainstream through which black women can narrate pain – both the pain of being misrepresented and the pain of being misunderstood and invisible — in a way that translates to audiences that largely believe black people have a higher threshold for pain than white people do.

So, yes, Jones’ joke could have been infinitely better. But we have not even figured out in black communities how to have an honest conversation about the seeming preference for light-skinned women in much of our media and cultural production. To expect Jones to nail a conversation that makes even the most educated sisters tear up and tense up might be an unreasonable expectation.

At the same time, though, it bears noting that America is currently being reintroduced to the idea of black women as authors and subjects of our own experience. Lest we forget, part of the novelty of the show "Scandal" is the fact that it is the first primetime mainstream drama with a black female lead in nearly two generations.  It has now been joined by BET’s hit drama "Being Mary Jane."

But as I watch both these shows, and the ways that black women, both my own friends and other women in social media, talk about them, it occurs to me that an audience for these shows is still being interpolated, or called into existence. What I mean is that television viewing audiences come to shows with expectations about what is possible, about what they have seen, what they haven’t seen, what they are willing to invest in, and what makes a show good. For nearly the last 40 years, there have been no shows that have allowed us to cultivate a set of expectations about what it looks like to have black women in television authoring and authorizing (as Shonda Rhimes and Mara Brock Akil do on "Scandal" and "Mary Jane," respectively) black female experience.

Black women and broader audiences more generally are still cultivating interpretive communities that can make sense of these portraits of ourselves in television. Thus, I understand why Jones' skit was cringe-worthy, but I also understand it to be part of the growth process of this moment.

Ours is a culture deeply uncomfortable with black women’s pain. And both within and without black communities, black women’s assertions of desire often enrage people who think our mere request to be seen, honored and cared for is an unreasonable demand. Jones chose an extreme (and inappropriate) comparison to demonstrate just how undesirable she has been made to feel.

And in that regard I think we should take Lemieux instructively, though perhaps in a different vein than she meant it. She wrote, “It’s disturbing to imagine that Jones’ own understanding is so limited that she actually believes [she would] do ‘better’ with men if forced breeding were on the table.”

It is, indeed, disturbing that Jones’ pain and experiences with dating and love have led her to such warped conclusions. But it is perhaps more disturbing to imagine, sit with and deal at the structural level with the fact that black racial entanglements with white supremacy routinely cause black women such severe emotional pain.