GOP's paranoid media delusion: Why their bias accusations are so misguided

Right-wing lunatics are right that there's a media bias. But they've got the target -- and motive -- all wrong 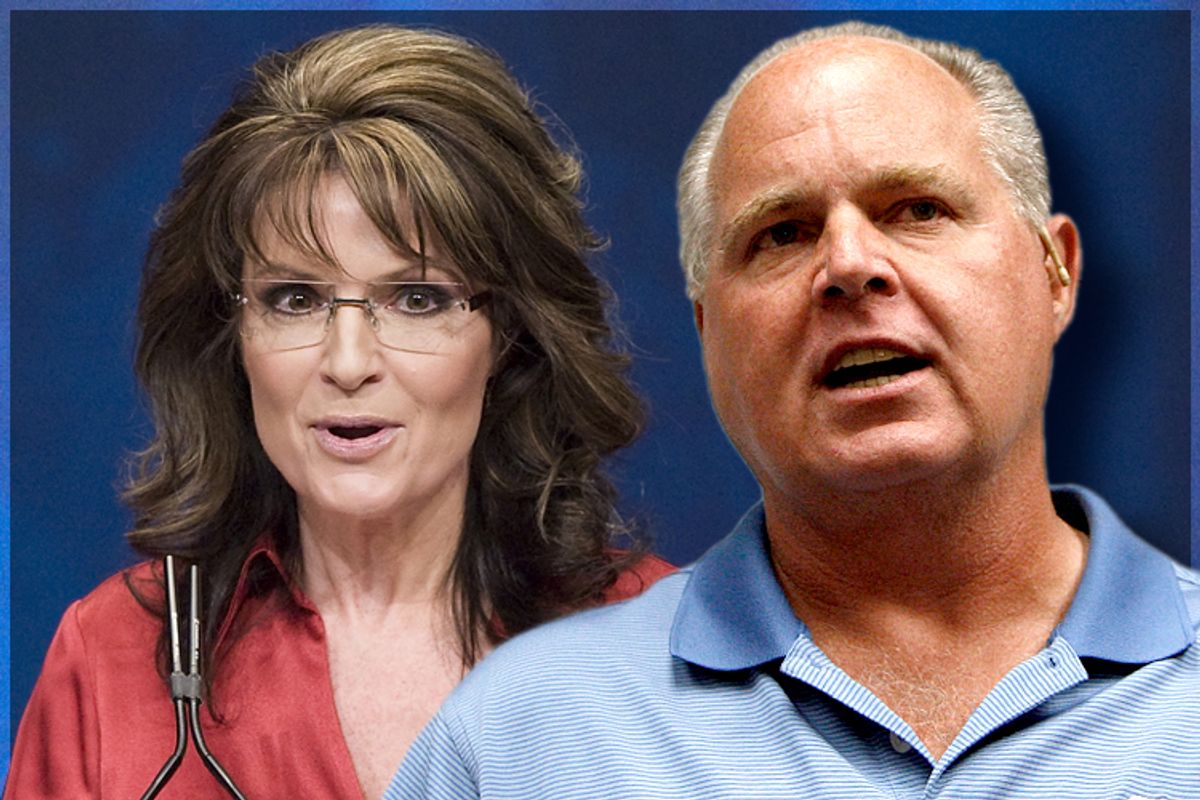 The liberal media has. Been. Caught! Red-handed! In a survey with numbers and math and the like, by professors.

"Just 7 percent of journalists are Republicans," came the blast from the Washington Post's Chris Cillizza. And he's not wrong. A survey conducted by two journalism professors at Indiana University, Lars Willnat and David Weaver, questioned 1,080 journalists and asked about their party affiliation. Only 7.1 percent said they were Republicans, while 28.1 percent were Democrats, 50.2 percent were independents, and 14.6 percent were "other." (Presumably card-carrying Communists, according to the National Review comments section.)

The major change from the last time the survey was conducted, in 2002, was a move away from affiliation with both parties. Republican affiliation dropped to 7.1 percent from 18.0 percent and Democratic affiliation from 35.9 percent to 28.1 percent, while independents soared from 32.5 percent to 50.2 percent. The study also has lots of interesting/tragic/more important information about how women are underrepresented in and more likely to drop out from the profession early on, how there are still basically only a handful of racial minorities in the entire industry, and how no one in the industry is happy or thinks their trade is headed in the right direction ... but whatever to all that! Did you hear that the media is now officially liberal?

Cillizza writes that "these numbers will likely affirm the belief in conservative circles that 'all' reporters are secretly Democrats." (He does make the important caveat that these numbers reflect all journalists, not just political ones. But minor details!) And right on schedule, up goes the post at the Media Research Center's Newsbusters blog, titled, "New Survey of 1,000 Journalists: Four Times More Identify as Democrats Than Republicans." Then there's the aforementioned National Review post. This is only the beginning, and we should expect those who complain about the Liberal Media for a living to cite this 7 percent, 4-to-1 ratio for the next several decades to explain why "no one will cover" Benghazi or Jeremiah Wright or "the knockout game" or whatever.

So do these numbers make it official that the media reflects a liberal bias? For that, we decided to ask one of the study's co-authors.

"We don’t think that our findings reflect a 'liberal media bias,'" Indiana journalism professor Lars Willnat tells Salon. "Journalists’ political preferences don’t usually translate into political bias in news coverage unless they are working for openly partisan news media. Their professional norms and values, as well as market pressures, prevent most of them from being biased politically."

Many will scoff at the notion that political journalists have professional norms and values, so let's put what he's saying into a more digestible form. What motivates political journalists in the so-called mainstream media -- as in news organizations that seek neutrality and objectivity, for better or worse, as their mission -- is very rarely a right- or left-wing agenda. It's careerism. You know, impressing the boss and moving up the ranks!

This about squares with my very non-scientific experience interacting with political reporters at these organizations. I have no idea what most of their politics are, and they probably don't either. They have no time for long-term ideological plotting. It is always comical when someone accuses, say, Politico or the Washington Post of having some sort of institutional left- or right-wing bias; more often than not, the people there are concerned with getting a "scooplet" 15 minutes before some other outlet gets it. While D.C.-based political reporters, at least, generally are in favor of some Democratic positions such as marriage equality or gay rights, they're also strangely likely to believe that it's imminently necessary to make cuts to Social Security and Medicare benefits. So if there's any bias that does come through in neutral, objective political news coverage, it's a skew toward issues of importance to elites.