"Look at my gun!" Why NRA's scary "open carry" craze is not about freedom

Freedom for a man with a gun trumps freedom for parents of kids who feel endangered by him. Our scary new reality 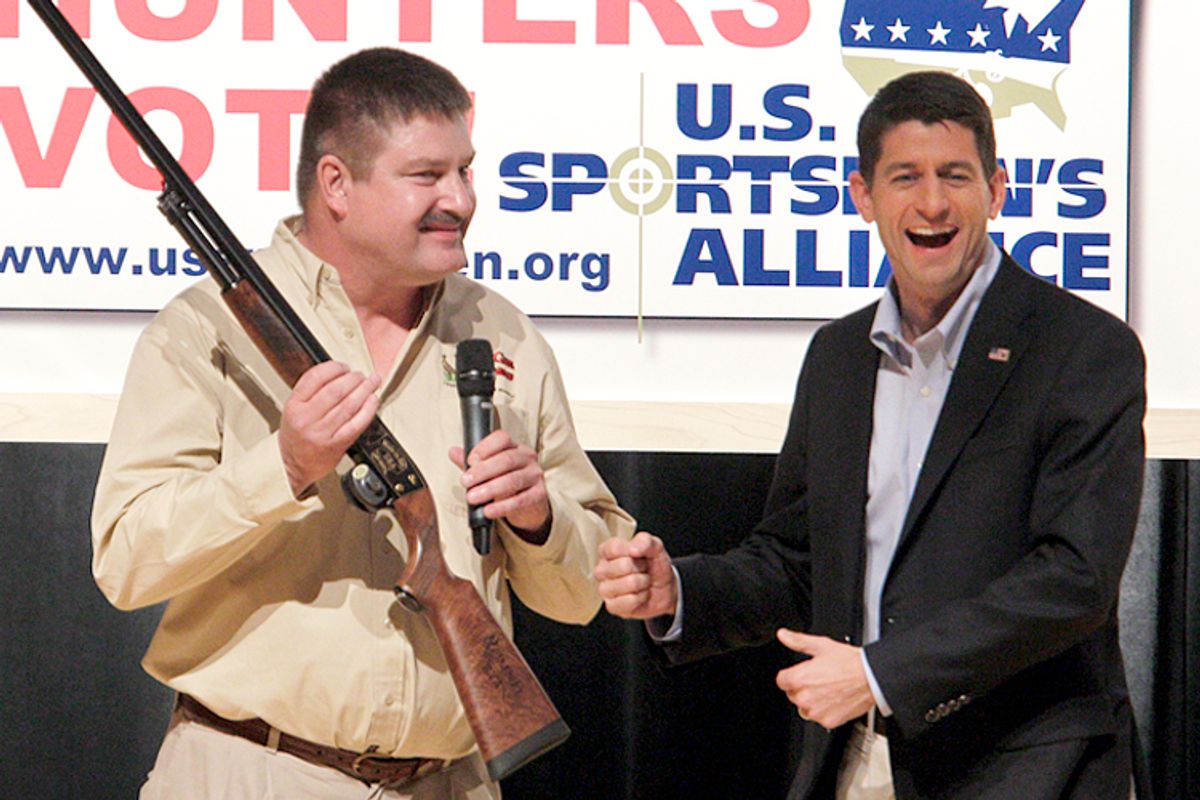 Imagine you're sitting in a restaurant and a loud group of armed men come through the door. They are ostentatiously displaying their weapons, making sure that everyone notices them. Would you feel safe or would you feel in danger? Would you feel comfortable confronting them? If you owned the restaurant could you ask them to leave? These are questions that are facing more and more Americans in their everyday lives as "open carry" enthusiasts descend on public places ostensibly for the sole purpose of exercising their constitutional right to do it. It just makes them feel good, apparently.

For instance, in the wake of the new Georgia law that pretty much makes it legal to carry deadly weapons at all times in all places, parents were alarmed when an armed man showed up at the park where their kids were playing little league baseball and waved his gun around shouting, "Look at my gun!" and "There's nothing you can do about it." The police were called and when they arrived they found the man had broken no laws and was perfectly within his rights to do what he did. That was small consolation to the parents, however. Common sense tells anyone that a man waving a gun around in public is dangerous so the parents had no choice but to leave the park.  Freedom for the man with the gun trumps freedom for the parents of kids who feel endangered by him.

After the Sandy Hook elementary school massacre, open carry advocates decided it was a good idea to descend upon Starbucks stores around the country, even in  Newtown where a couple dozen armed demonstrators showed up, to make their political point. There were no incidents.  Why would there be? When an armed citizen decides to exercise his right to bear arms, it would be reckless to exercise your right to free speech if you disagreed with them. But it did cause the CEO of Starbucks to ask very politely if these gun proliferation supporters would kindly not use his stores as the site of their future "statements." He didn't ban them from the practice, however. His reason? He didn't want to put his employees in the position of having to confront armed customers to tell them to leave. Sure, Starbucks might have the "right" to ban guns on private property in theory, but in practice no boss can tell his workers that they must try to evict someone who is carrying a deadly weapon.

Just last week open carry proponents decided to have one of their "demonstrations" by going into a Jack in the Box en masse, scaring the employees so badly that they hid in the walk-in freezer. The so-called demonstrators seemed confused by the response of police who assumed there was an armed robbery in progress and dispatched a phalanx of cops.

“It’s just for safety purposes," Haros said. "Officers can’t be there at all times. We understand that. They can only do so much.”

So this fine fellow believes he is doing this to protect the public. And while they don't wear uniforms so you can't identify them, have no specialized training in the law, are not bound by police protocols or answer to the authority of the democratic system of government of the people, they have taken it upon themselves to look after all of us because the police are busy. (And presumably, unless you are wearing a hoodie and they think you look suspicious, you probably won't get shot dead by mistake.) We used to have a name for this. It was called vigilantism. One can only hope that when a "bad guy" really does show up at your Jack in the Box or Starbucks and one of these self-appointed John Waynes decides to draw his weapon you'll be as lucky as the innocent civilian who narrowly escaped being killed in error at the Gabrielle Giffords shooting.

All of this is allegedly being done to protect our freedoms. But it's only the "freedom" of the person wearing a firearm that matters. Those parents who want their kids to feel safe in a public park aren't free to tell a man waving a gun around to leave them alone, are they? Patrons and employees of Starbucks aren't free to express their opinion of open carry laws when one of these demonstrations are taking place in the store. Those Jack in the Box employees aren't free to refuse service to armed customers. Sure, they are all theoretically free to do those things. It's their constitutional right just like it's the constitutional right of these people to carry a gun. But in the real world, sane people do not confront armed men and women. They don't argue with them over politics. They certainly do not put their kids in harm's way in order to make a point. So when it comes right down to it, when you are in the presence of one of these armed citizens, you don't really have any rights at all.

You can see why they think that's freedom. It is. For them. The rest of us just have to be very polite, keep our voices down and back away very slowly, saying, "Yes sir, whatever you say, sir," and let them have their way.