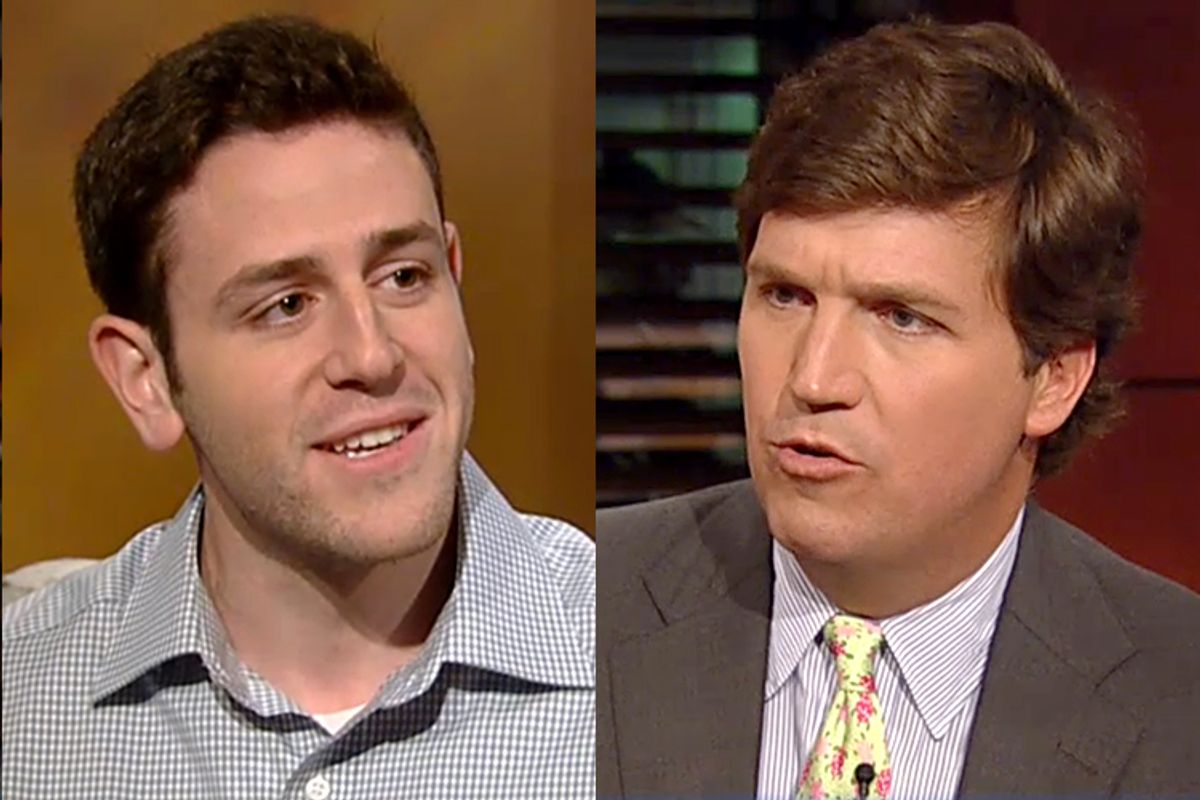 Princeton University freshman Tal Fortgang is the current face of white dude entitlement, but he's not the only reminder we have right now about what happens when sheltered boys enter the world feeling that they're owed something and believing that their actions don't have consequences.

Call it whatever you'd like. Toxic masculinity. Frat mentality. Patriarchal bullshittery. But put really simply, the problem is that our culture doesn't generally encourage boys to feel compassion or curiosity beyond a very narrow sphere of their experience, and then some grow up to be terrible jerks.

And the pathetic thing is that a smug and racist editorial written by a college freshman with a tiny baby brain -- a piece that should have died on the pages of a college newspaper but was embarrassingly propped up as legitimate commentary by Time magazine -- is a comparatively benign example of what happens when boys are raised not to think much about other people.

Epidemic levels of sexual violence on college campuses, the racist misogyny that characterizes so much of fraternity life, the male politicians who spout off about "legitimate rape," the high school and college football coaches who ignore reports of sexual assault to shield their players from accountability -- these are all part of the same problem.

This week, a college student filed a Title IX complaint against Northeastern University after school officials allowed her rapist to challenge his assault charges and quickly transfer schools. In contesting the board hearing that found him responsible for sexual assault, the woman's rapist argued that the "level of consent" the school used against him was "too high" and thus unfair. His victim said "no" several times during the assault, but he didn't listen to her. Northeastern let him get away with it. “[My assailant] thinks that just because I didn’t punch him in the face, I consented,” Katherine Rizzo, the survivor in the Northeastern case, told BuzzFeed. “And the school apparently thinks that’s a valid argument, too.”

Another student at Brown University who choked and raped a classmate was allowed to reenroll after a single semester's suspension. Brown has since rescinded the decision to allow the student back, but it took a public outcry -- led by the survivor of the assault -- to get the school to reverse course. All in all, there are 55 schools currently in the midst of Title IX investigations because the survivor experiences at Brown and Northeastern are far from unique.

Outside the college realm, Tucker Carlson -- papa bear to a collection of racist misogynists over at the Daily Caller -- said this week that sexual assault against men is a victimless crime. When the female hosts of Fox News' "Outnumbered" -- a show that could alternately be called "Hey wow there are more women than men here right now and that's not usually how this works ha ha ha" -- asked him why he would say something that so clearly minimized the experiences of male survivors, Carlson replied, "Because it's true."

Carlson is basically Fortgang -- or the myriad other college baby men that our culture is churning out and protecting -- 25 years down the road and with a bigger platform. Neither of these guys are really that culturally significant or smart, but what they say and do gets parroted and propped up across the shithead echo chamber of certain parts of the media. Their defenses of the status quo and lazy ideas about how the world works get repackaged as brave truth telling, and they get lionized and rewarded for it. (In the case of Fortgang, this couldn't be more true. He pretty much emerged from the womb and was promptly booked for an interview with Greta Van Susteren and landed a spot on Time's homepage.)

That men like Fortgang and Carlson manage to symbolize so much while actually mattering so little is kind of depressing, but the reign of whiny white dudes may be on the decline. People are pushing back really, really hard against their tantrums. They are documenting incidents of misogyny or racism on campus and in the media, and blowing these stories up so the whole country can see them.

The surge in Title IX complaints is probably the most direct example, but the struggle against male entitlement -- on campuses and elsewhere -- is happening daily in smaller ways, too. The entire reason that Fortgang felt the need to complain about being asked to think about other people -- and the advantages that his whiteness, his maleness and his wealth have afforded him -- is because his peers are now acting as a check against his tunnel vision. Granted, the plush green lawns of Princeton are still home to a really narrow portion of the population, but at least part of that student body is interested in calling him on his shit.

There are blogs dedicated exclusively to exposing racist and misogynistic frat antics. An organized network of student activists are coordinating national campaigns to keep the public's attention on their schools' gross failures of accountability through federal lawsuits. Journalists and activists have kept these stories in the headlines. It's harder than ever to be terrible in secret, and that's a good thing.

But in many ways it's still just the beginning. There is a lot of really awful stuff that continues to go unnamed and unchallenged and our culture continues to fail boys and men with its destructive models of angry and entitled masculinity, but guys like Fortgang are whining harder than ever because their relevance -- tenuous as it may always have been -- has never been more precarious.