They're lying about Louis C.K.: He's right about Common Core -- and not a Tea Partyer

There's a new scheme afoot: Paint all opposition to education reform as "crazy." Don't fall for the "wingnut con" 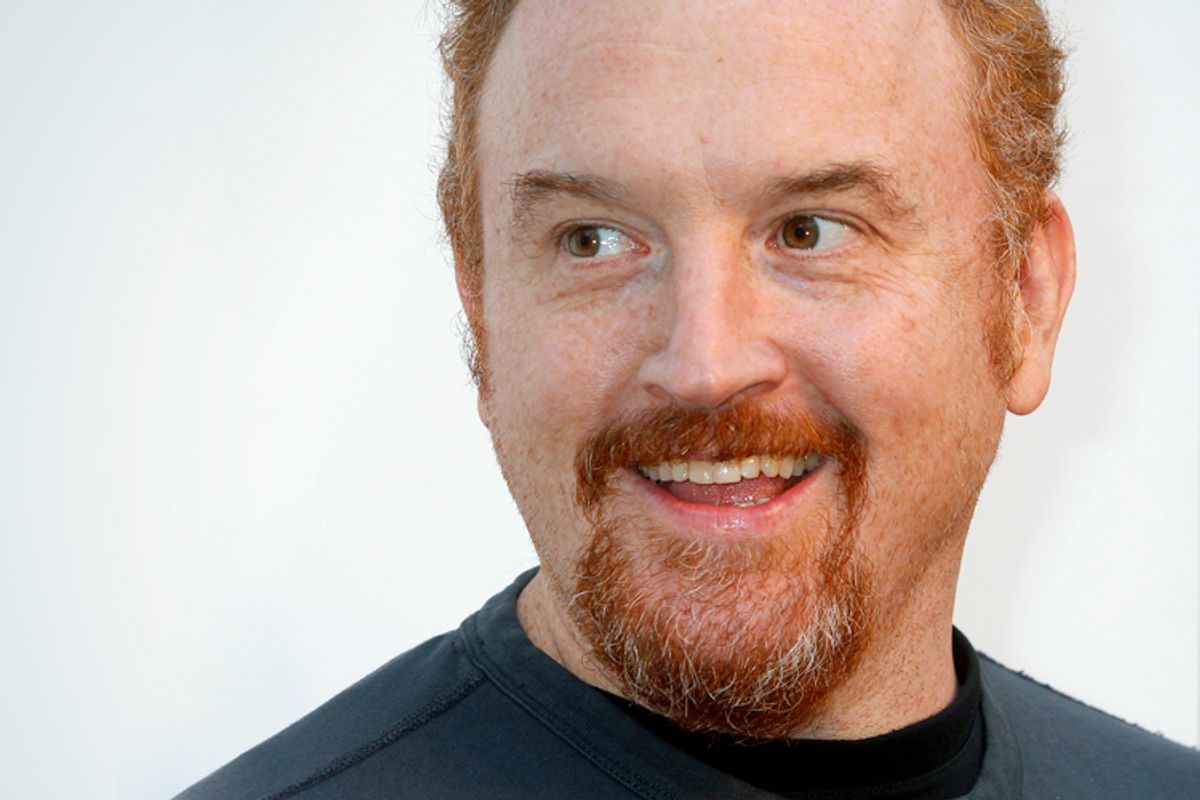 Sometimes it takes a comedian to make a serious point.

When Louis C.K. went on a Twitter rant about the standardized tests and Common Core State Standards being rolled out in his own children's public schools, he brought to mind other instances where comedians have broken through the fog of typical policy debate to reflect how most people really feel about an issue.

Recall, if you will, when Stephen Colbert roasted then-President George Bush at the White House Correspondent's Dinner in 2006. His hilarious send-up of the Bush administration's horrendous decision to turn the tragedy of Sept. 11 into a reckless and nonsensical invasion of Iraq was acknowledged to be, as one Salon writer put it, not just a blistering critique of Bush’s policies but also a ridicule of the "ever-cheapening discourse that passes for political debate" about those policies.

But what people often forget about Colbert's remarks is that they got huge attention by media at a time when they were mostly ignoring huge protests against the war occurring in the streets. Colbert revealed what a lot of the populace already knew: that the causes for war were trumped up, and the administration was colluding with policy circles in Washington, D.C., and the mainstream media to prop up false arguments for the status quo.

Similarly, what Louis C.K. said about current education policies like standardized testing and the Common Core occurred against a backdrop of popular dissent.

A Movement, Not a Moment

When new standardized tests Louis C.K. railed against rolled out in New York, at least 33,000 students skipped the tests. At one Brooklyn school, so many parents opted their students out of the tests the teachers were told they were no longer needed to proctor the exams. At another Brooklyn school, 80 percent of the students opted out. Elsewhere in Long Island, 41 school districts in Nassau and Suffolk counties reported thousands of students refusing to take the test, and an additional district reported hundreds more.

What is happening in New York is indicative of a groundswell of popular dissent – what Peter Rothberg, a journalist for the Nation and a New York City parent, called a “nationwide movement” – against the overuse and abuse of standardized testing in public schools.

The National Center for Fair and Open Testing, an independent organization that works to end the misuses and flaws of standardized testing, keeps a running count of the test resistance on its website Fairtest.org. When education historian Diane Ravitch recently reviewed the tally, she found "stories about test protest and reform activities – as well as a few victories – come from more than a third of the states," which she listed on her personal blog.

Fair Tests's executive director, Monty Neil, recently wrote for a blog at the Washington Post, "The testing resistance movement has exploded across the nation." Neil listed major concerns that drive the parent and student protesters, including:

Volunteer activists in the test resistance movement who formed United Opt Out in 2011 have become so disruptive to the standardized testing establishment that their website was recently "hacked into and destroyed – along with a great deal of their web-based educational tools," according to a report at Alternet, including "years of research, with an archive of guides and tutorials for opting out tailored specifically to almost every U.S. state."

The Alternet reporter quoted Denver UOO organizer Peggy Robertson who said, "It's clear we pose a serious threat … it's not the typical hack job. It was malicious."  The website has since been restored.

Breaking Through the Bland Rhetoric

Much in the same way that Colbert broke through the cheap dialogue about "patriotism" and "strength" that surrounded the Iraq War, Louis C.K.'s plain speaking about his daughter's education seared through the bland rhetoric about "standards, expectations, and achievement" that dominates the debate about education policy. He explained what is rapidly becoming the reality about schooling everywhere in America: "It's changed in recent years. It's all about these tests. It feels like a dark time."

Speaking from a parent's point-of-view, he described his daughter's schooling as a "massive stressball." He questioned the role of test-makers like Pearson who now seem to figure more prominently in his children's education than their teachers do.

Those who defend the Common Core, in particular, were quick to put up blog posts at Newsweek and Vox explaining how Louis C.K. had gotten the new standards "wrong." Of course, his criticisms weren't even about the standards explicitly. It's doubtful Louis C.K. has ever even read them. Among those who have read the standards, some like them, some don't.

But the truth is, no one actually knows, in an objective way, whether these new standards are any good or not because they've never been piloted anywhere and evaluated based on their results with actual students. There's no proof anywhere they will produce "more rigor in the classroom" or solve the problems of educating "disadvantaged kids," as so many contend. So the debate about whether the standards represent "high quality" is just so much conjecture.

But the current heightened emphasis on standardized testing is an effect of the policies of the Obama administration, for sure. In order for states to get grant money available from Race to the Top and obtain waivers from No Child Left Behind, they had to link scores on standardized tests to their evaluations of teachers and principals. This has heightened the "stakes" in high-stakes testing.

Even ardent supporters of the Common Core are having their doubts. In a Salon interview by Josh Eidelson, American Federation of Teachers president Randi Weingarten warned the new standards “may actually fail” due to a host of problems going beyond testing and the poor rollout to issues with being "developmentally inappropriate for the earliest of kids" and a government copyright that "suggests they’re fixed in slate, and that’s just wrong."

The Big Picture Most Miss

What's so often lost in the debate over education policies is that criticisms of the Common Core and testing are symptoms of much larger problems with education spreading across the country. Last year in Chicago there were three days of protests against the city’s decision to close their neighborhood schools for the sake of “reforming” them.

Similar protests occurred in Philadelphia where communities of black and brown citizens openly defied civic leaders’ decisions to cut education spending and close neighborhood schools, again, in the name of “reforming” them.

These events, and others, reveal an emerging Education Spring – a counterargument now slipping into the mainstream of American opinion in opposition to the education policies championed by the likes of Michelle Rhee and Education Secretary Arne Duncan.

What’s generally not understood is that these flash points of resistance are driven by common grievances – a grass-roots “common core” if you will – that is shaping the rapidly evolving education debate.

Behind nearly every protest to the status quo education policies are common grievances that our local schools are being appropriated from us, and thus, teachers, parents, students, even whole communities increasingly feel they have less control over their education destinies, while at the same time, they see that governing policies are driving more control to testing companies and other powerful entities we never chose.

Louis C.K.'s joke, this time speaking on the David Letterman show, that when the kids don't do well on the tests "they burn the school down" is not too far from the truth. And his follow-up comment that "the tests are written by people nobody knows who they are" is no joke at all.

Of course, the folks in charge and much of the courtier crowd of policy and media types who follow them around are the ones who are most immune to these realities. As a parent writing to President Obama explained, in a letter posted at the Washington Post blog of Valerie Strauss, "We have something very important in common: daughters in the seventh grade … Like my daughter Eva, Sasha appears to be a funny, smart, loving girl … There is, however, one important difference between them: Sasha attends private school, while Eva goes to public school … Sasha does not have to take Washington’s standardized test, the D.C. CAS, which means you don’t get a parent’s-eye view of the annual high-stakes tests taken by most of America’s children."

That parent's-eye view Obama misses all too clearly sees that "the standards won’t succeed if the tests used to assess them are confusing, developmentally inappropriate, and so hard that even good students can’t do well on them."

Confusing … inappropriate … so hard that even good teachers, parents and students can’t do well – that pretty much captures how most Americans increasingly feel about current education policies.

"Everything important is worth doing carefully," the comedian tweeted. "None of this feels careful to me." Amen.