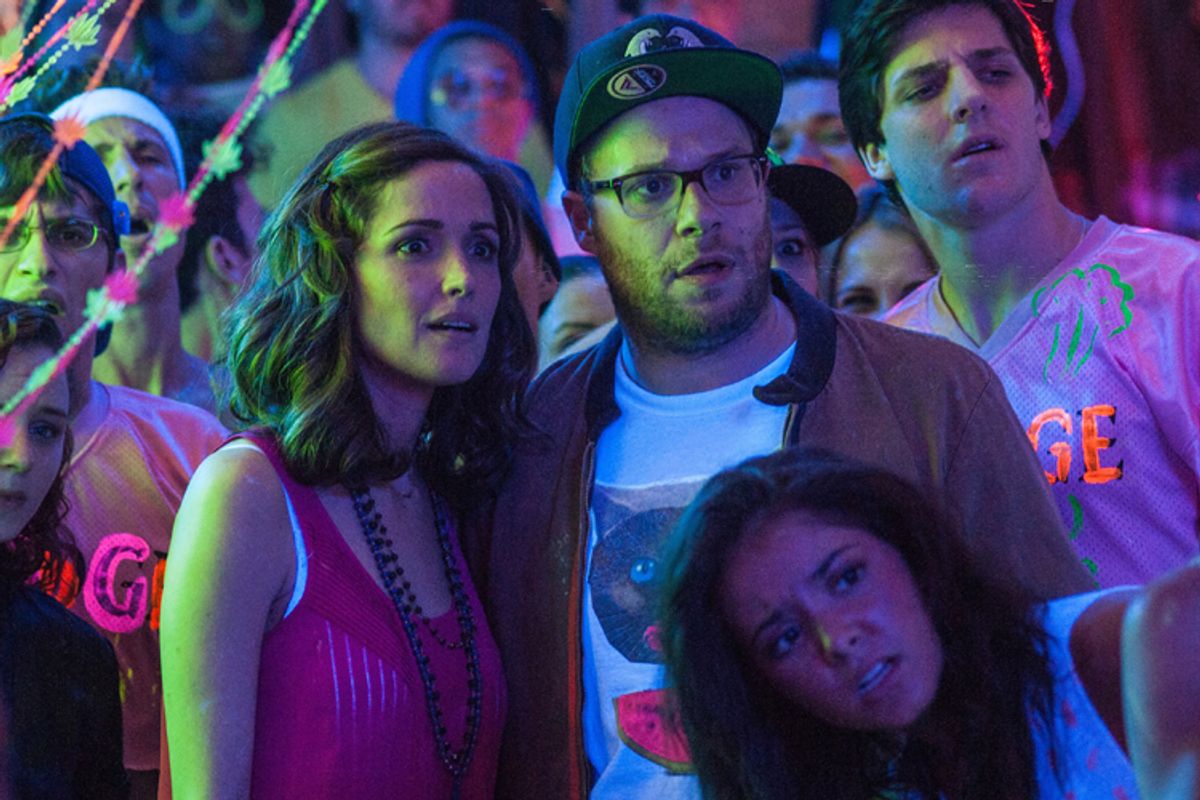 Such charms as the family vs. frat-house comedy “Neighbors” possesses depend largely on its cheerful insistence that it takes nothing seriously, especially itself. This tale of an overly self-conscious young married couple played by Seth Rogen and Rose Byrne, and their exaggerated and supposedly hilarious feud with the boys of Delta Psi and diabolical dreamboat president Zac Efron, is just a string of ludicrous excuses to get from one outrageous comedy set-piece to the next: A dance-floor showdown between Efron and Rogen; a scene in which a broken breast pump compels Rogen’s character to milk his wife; a series of strategically concealed automobile air bags, functioning somewhat like whoopee cushions on steroids.

I watched the movie with a New York preview audience that loved it, but on the way out I overheard two women complaining about holes in the story. I wanted to ask them whether they’d noticed the scene in which Mac (Rogen) and his wife, Kelly (Byrne), argue about which of them gets to be the Kevin James character in the marriage farce, flying off the handle and doing stupid things, and which of them has to be the sensible wife. “There’s some Kevin James in me!” Kelly protests. That micro-moment of postmodernism is actually pretty funny, but it ought to clue us in that, by design, there is no story in Andrew Jay Cohen and Brendan O’Brien’s screenplay, only holes. “Neighbors” tries to channel the high jinks of “Animal House” and “Old School” and every other comedy about the difference between college partying and so-called real life, along with the boundary-pushing body humor of the Apatow era, for an attention-deficit age. This is a funny movie in places, but it’ll be a whole lot funnier in the YouTube remix that runs 11 or 12 minutes.

One thing you can say for the miscellaneous and half-baked narrative of “Neighbors” is that what might be the psychological subtext of another movie is just text, right there on the surface. When Mac and Kelly realize that, no, the delightful-looking gay couple they saw with the real estate agent are not buying the house next door, but the local college’s most notorious fraternity is, they gaze out the window at Teddy Sanders (Efron), the muscular demigod at the head of this band of brothers, with unbridled lust. It’s almost as if the gay guys have caused a momentary disturbance in the Force; it is Mac rather than Kelly who observes that Teddy is extremely attractive, and compares his exposed biceps to penises. (Later on, he will describe Teddy’s physique, to his face, as “a giant arrow pointing toward your dick.”)

Despite their intensely erotic gaze, what Mac and Kelly envy and desire and lust after in Teddy is less his body than his freedom, not to mention his serenely untroubled mind. They have a new baby (and the inescapable 75 pounds of baby-gear), a severely curtailed social life and a lovely suburban home that represents their entire net worth. Mac has some kind of cubicle job that’s so boring we never find out what it is; smoking a doobie at lunch with his still-single pal Jimmy (Ike Barinholtz of “The Mindy Project,” an irresistible performer) seems to be the highlight of his day. Teddy has none of those concerns, and seems likely to sail right over the top of them, in his stupid but beautiful fashion, into the indefinite future. If this is yet another fable about the price of white privilege – the inescapable theme of the moment, it appears – Teddy simply isn’t paying any.

Am I reading too much, as per usual, into a dumb-clever comedy that pokes fun at the manufactured hedonism of frat boys and the overwrought anxieties of young parents, without putting any strain on our higher functions? (Its director is Nicholas Stoller, of “Get Him to the Greek” and “The Five-Year Engagement.”) Well, sure. But here’s another question: Doesn’t the protestation that we shouldn’t think too hard about entertainment really mean that it’s revealing something, very close to the surface, that we’d rather not think about? Mac and Kelly first hang around the Delta Psi house with overtly uncool longing, doing Jell-O shots and magic mushrooms all night (it is not entirely clear who is caring for their infant daughter during this episode), and then wage a silly and destructive guerrilla war against Teddy and his bros, on a flimsy pretext.

Why? Because their life sucks, and Teddy’s life is awesome. Efron doesn’t play Teddy as a human being so much as a walking Id, a guilt-free autonomous zone of pleasure with precisely as much depth as an Abercrombie & Fitch ad. Mac and Kelly, on the other hand, are overwhelmed with doubt and knowledge, fumbling their way through fist bumps and bong hits but knowing themselves to be already alienated from such things. They’re like Odysseus, tied to the mast and weak-kneed with desire while the Sirens of Delta Psi sing of unimaginable, unattainable and destructive pleasures. Oh, conditions have improved aboard that ship of economic imperative: Marijuana is ubiquitous, potent and semi-almost legal, and same-sex couples are welcome to load up on mortgages and baby gear and get on board. But beg as you will, no one will cut you loose from that mast, the ship plows onward through the waters of rational expectation and fantasy island is soon left behind.

There’s nothing unusual about a Hollywood comedy seeking to reassure its audience that the conventional existence most of them have chosen or will choose (accepting, for the moment, the fiction that it’s a free choice) is rewarding and worthwhile. Stoller and the writers handle that task subtly and cleverly, gradually stripping Teddy of his erotic power and making clear that he too must become a marketplace commodity. But even the conventional existence proposed in “Neighbors” – the return to reality after the destruction of the dream world – is a nostalgic, idealized fiction. Under current economic conditions that are never visible in this movie, Mac and Kelly’s path of happy-family upward mobility is almost as much an illusion as Teddy’s life of all-night, drug-addled ragers. We can long for either, or dare to imagine a mystical, momentary fusion of the two. When the movie’s over, most of us are left with neither one.