Party of moral failures: Why Obamacare foes are about to pay a price

With Obamacare's benefits becoming tangible, opposing it on ideological grounds will create a new set of problems 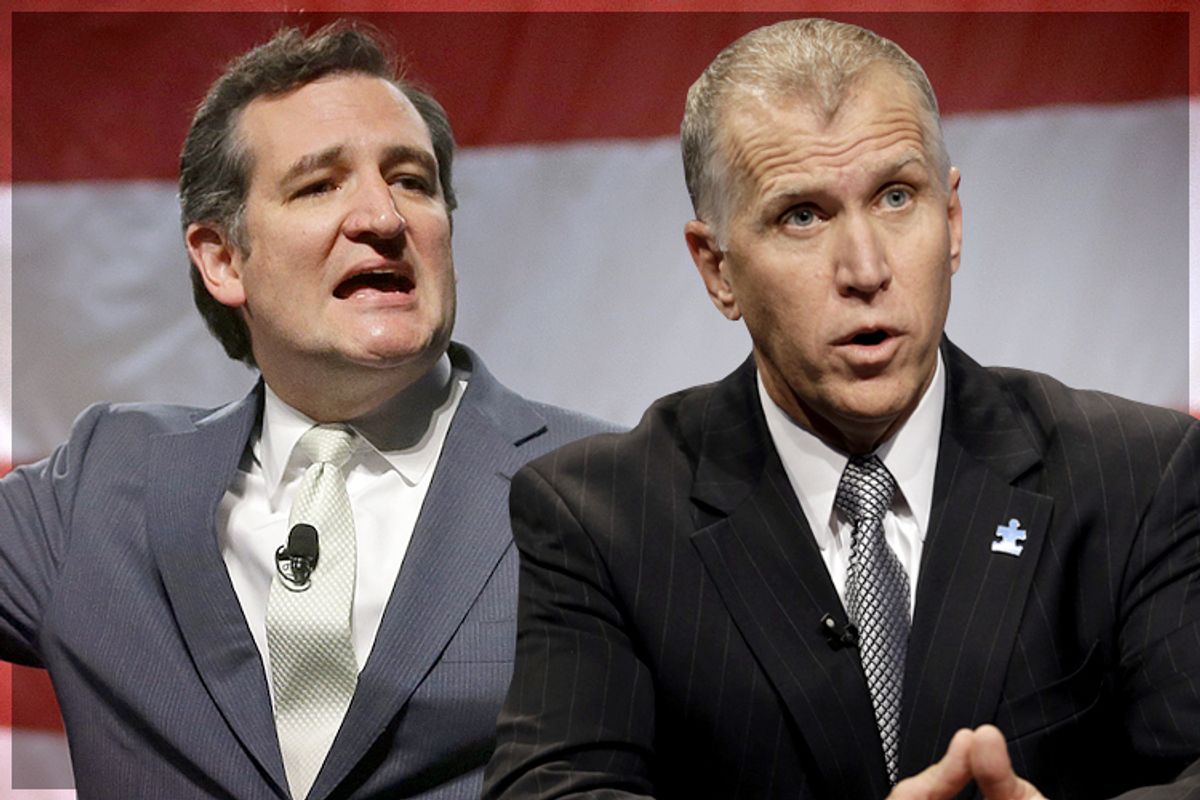 The Atlantic’s Molly Ball wrote an interesting piece on Tuesday’s Republican Senate primary in North Carolina and how it became an intra-party proxy war pitting the GOP establishment against the Tea Party. Ball went to a Tea Party rally in support of candidate Greg Brannon, and came away with one hell of an anecdote about a woman who under any objective calculus would very much benefit from health coverage, but is deliberately keeping herself uninsured:

I struck up a conversation with a woman with spangly gold fingernails named Sharon Doyle, who spends her free time holding "Impeach Obama" and "Remember Benghazi" signs on highway overpasses a couple of times a month. A caregiver for the elderly who's had cancer and back surgery, she can't afford health insurance through her employer, but she refuses to visit the federal health-insurance website for ideological reasons. Of the Republican frontrunner, state House Speaker Thom Tillis, she had only disdain—"He's a RINO. I don't trust him"—and said she wouldn't vote in November if he became the nominee.

There’s a lot to mull over here. Obviously she’s made the decision that adherence to principle outweighs the benefit made available to her by the Affordable Care Act. You could make equally coherent arguments that she’s behaving admirably and being irresponsible. In the end it comes down to what you consider more important: the intellectual value placed on ideological consistency, or the moral value in access to healthcare.

That’s why it’s a bit puzzling for her to call Thom Tillis, the victor of Tuesday’s primary who will face Sen. Kay Hagan in November, a RINO. Tillis made the same calculation she did: Ideology trumps moral value when it comes to expanding access to healthcare. The differences are that Tillis didn’t actually give up his health security, and his decision affected the entire state of North Carolina.

As speaker of the Republican-controlled North Carolina House of Representatives, Tillis led the opposition to expanding Medicaid in the state under the Affordable Care Act, effectively denying access to healthcare to as many as 500,000 North Carolina residents. He campaigned on that opposition to secure the Republican nomination: “Tillis stopped Obamacare’s Medicaid expansion cold. It’s not happening in North Carolina, and it’s because of Thom Tillis.” That message obviously resonates with deeply conservative voters who also put their ideological opposition to the health law ahead of its potential benefits.

As Obamacare takes hold, however, and its benefits start becoming tangible quantities instead of abstract political arguments, you have to start wondering when the moral imperative to improve healthcare access will overtake the ideological reasons for rejecting a policy that does exactly that.

A study that came out this week looked at the effect the 2006 healthcare reform law in Massachusetts had on mortality rates within the state. The authors found that the passage of the state reform package “was associated with a significant decrease in all-cause mortality compared with the control group.” Of particular note was their observation that “changes were larger in counties with lower household incomes and higher prereform uninsured rates.” As Jonathan Cohn observed, the study “suggests [Obamacare], implemented effectively, could save thousands of lives a year.”

Another study that came out this week from the University of Kansas Medical Center found that “Approximately 40,000 Kansans would benefit directly from Medicaid expansion by receiving critical cancer screening and prevention services.” One of the study’s authors said, “There are some people who will die of cancer because we’re not able to screen them or provide them with the prevention services they need.”

Studies like these provide substance to anecdotal examples of the Affordable Care Act saving lives, like that of Dean Angstadt, the die-hard Obamacare opponent who signed up for coverage just in time to have heart valve replacement surgery.

Meanwhile, states that initially rejected the expansion of Medicaid are under pressure to reverse course, putting Republicans who oppose Obamacare in a tight spot. And it’s not hard to understand why. Expanding Medicaid is a great deal for the states – it covers the residents who are most in need of assistance, and it's paid for almost completely by federal dollars. Republicans arguing against this are left sounding like heartless ideologues as they explain why it’s better for the poor to remain wedged in the Obamacare coverage gap than to have faith that the federal government will meet its obligations.

In North Carolina, Thom Tillis’ well-publicized efforts to block the Medicaid expansion play well with conservatives, but they’re actually out of step with the state as a whole, if recent polling is to be believed. A New York Times poll from last month found that 54 percent of North Carolina registered voters favor expanding Medicaid in the state, compared to 36 percent who oppose it.

The simple explanation behind this is that people really, really like having access to healthcare. They see the unquestioned moral value in it. And while Obamacare opponents might think they’re riding high with their anti-big government sermonizing, it seems inevitable that the need to be insured will outweigh the desire to stick it to the socialists.