Gwyneth Paltrow: My critics need to get over the "mommy wars"

The actress's latest message is that she's not the mommy warrior -- you are! And you! And you! 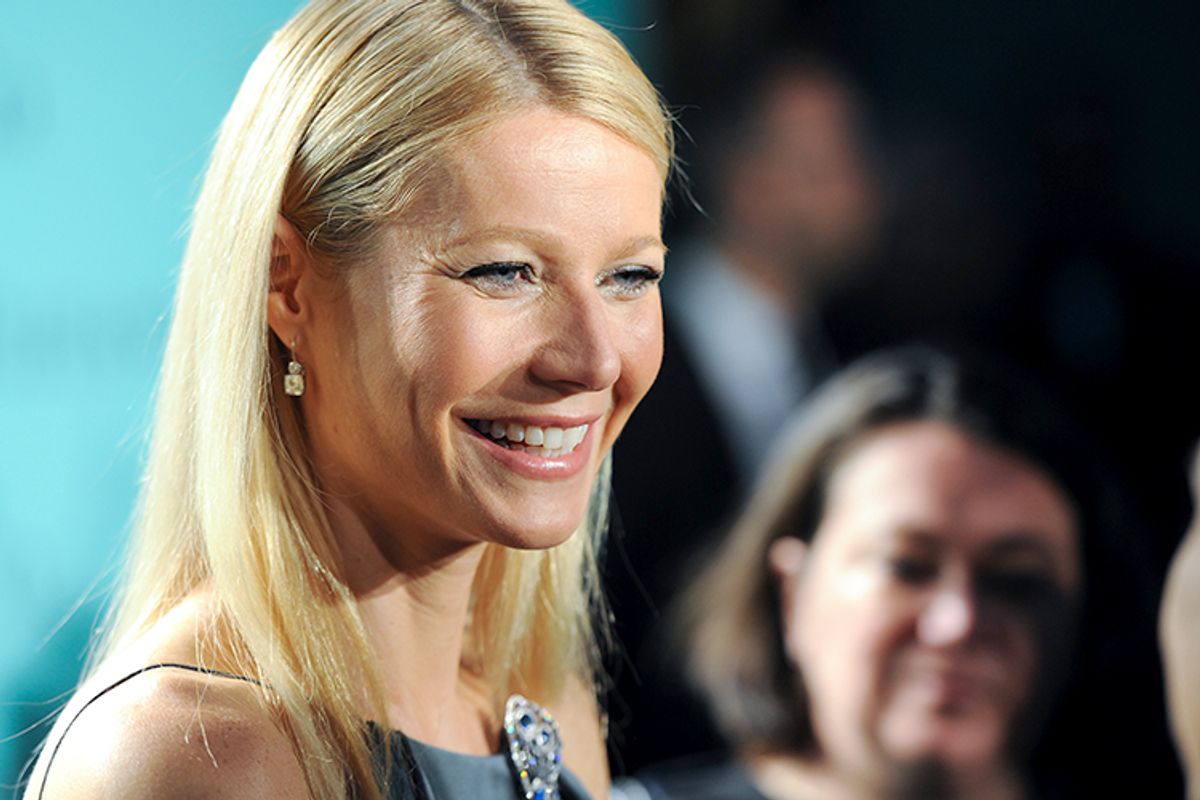 Gwyneth Paltrow is no stranger to using her Goop newsletter to spread her general message about clean, luxurious living as well as more specific ideas about herself as an avatar of perfection. Her split with husband Chris Martin was always going to be major news on the celebrity beat, but through her "conscious uncoupling" missive, the actress was able to spread the notion of herself as a practitioner of wise divorce -- and while you're reading her letter on Goop.com, check out the shirts she has for sale! And in Paltrow's most recent column, those who criticize the actress's decadent lifestyle and self-obsessed manner of speaking about herself are just mommy warriors, taking part in a nasty game for which Paltrow herself is too enlightened.

Paltrow appears to be responding fairly specifically, in her latest Goop column, to a New York Post article that lambasted her for saying that working on a film set is grueling and an experience she has lately tried to limit:  "I think it’s different when you have an office job, because it’s routine and, you know, you can do all the stuff in the morning and then you come home in the evening." The Post column, written by a working mother, mocked Paltrow's seeming ignorance of just how tough an office job can be: "Livin’ la vida desk job is a breeze compared to the 14-hour days of a film set. Fourteen hours? Who in New York — especially those in the finance, law and tech professions — could possibly work 14 whole hours?"

Paltrow put on a convincing-as-it-needs-to-be show of ignorance as to why -- why?! -- her critics might possibly have misconstrued her statements that office jobs are easier than film work: Her remarks were "somehow [...] taken to mean I had said a 9-5 job is easier, and a lot of heat was thrown my way, especially by other working mothers who somehow used my out-of-context quote as an opportunity to express feelings (perhaps projected) on the subject." Perhaps projected.

There are two things at work here: Paltrow's remarks, even as presented in the unflattering Post article, are true. It is easier to work on a consistent schedule than it is to travel to intense film shoots. They also, as per usual with Gwyneth, reflect a cloistered understanding of what it is people want to hear. Yes, she takes the best option available to her in working on a limited schedule. Most people don't get such a cornucopia of options -- and their annoyance that she seems to be lecturing on how you can "do all the stuff" you need to do quite simply doesn't come out of nowhere.

Paltrow's Goop column rests on a canny inversion -- her entire post-"Iron Man" career has been focused on telling people the best way to live, but it's her critics who are the judgmental ones. She just wants to help! "We see disapproval in the eyes of other mothers when we say how long we breastfed (Too long? Not long enough?), or whether we have decided to go back to work versus stay home." Implicit in Paltrow's Goop columns is the notion that you're doing it wrong (dressing, eating, working, divorcing) and that it can all be easy if you let it. Her evoking the specter of "mommy wars" to describe those who feel as though they're trying their best and not making it -- as opposed to those who lord their perfection over others -- is entirely novel. And now her critics, having gotten a response from their bête noire, will seem petulant if they continue to push the issue.

Paltrow may have an Oscar, but her best skill of all is self-promotion toward an unforeseeable end.