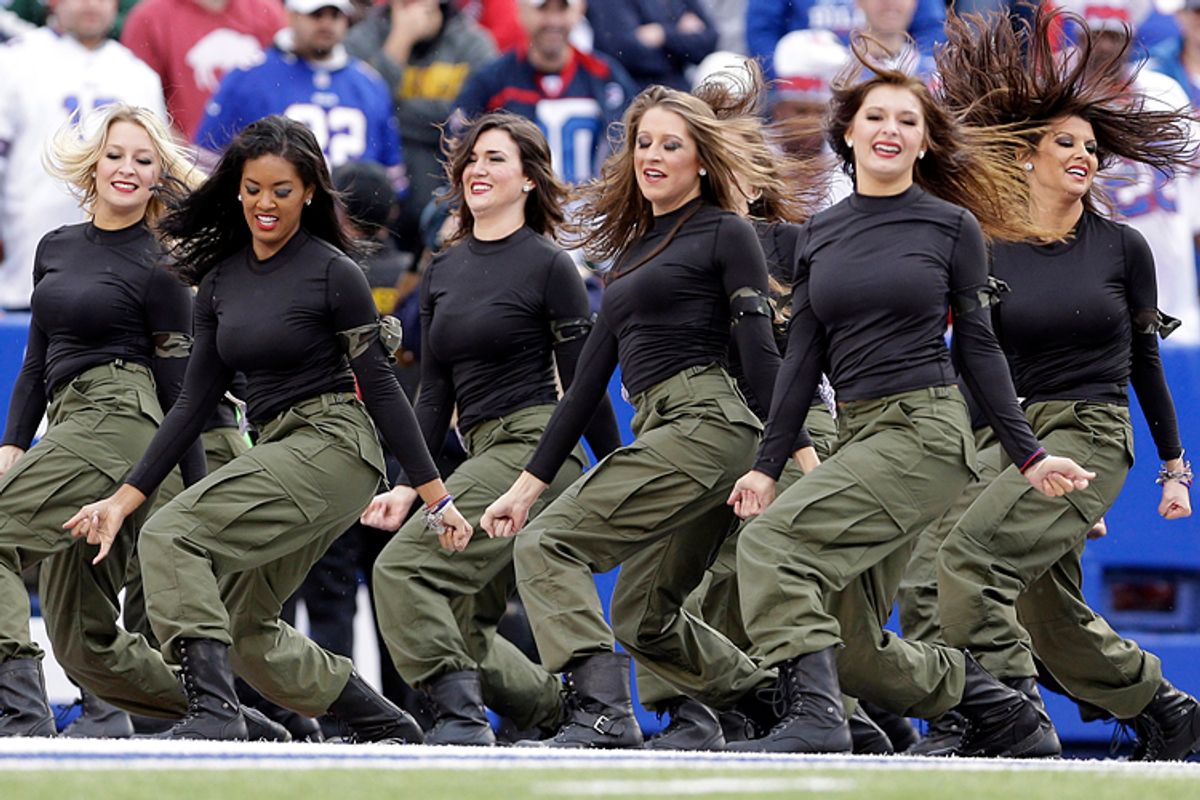 Bosses of the Buffalo Jills, the NFL cheerleading squad for the Bills, are being sued for allegedly not paying employees fully for their work. In response, the director of the Jills struck back Wednesday in a statement to the press, accusing the Buffalo Bills of failing to support the squad and suggesting critics have ignored the Jills’ many perks.

“While much has been said about how the Jills were compensated, there was an extensive list of benefits given to the members of the squad that included free surgical procedures, free gym memberships, free tanning memberships and free tickets and parking to all Buffalo Bills home games,” said an attorney for Stejon Productions, the company that manages the team and has suspended its activities amid the legal battle.

“Pretty much they control everything that we do,” Ferrari, who served on the squad for the 2009 season, told Salon. (Before founding Stejon Productions and taking over managing the Jills, Stejon owner Stephanie Mateczun was the Jills’ cheerleading director under a different company, Citadel.)

Ferrari’s lawsuit, filed the same day as a separate suit by five other ex-Jills, followed cheerleaders’ wage theft suits against the Oakland Raiders and Cincinnati Bengals squads, and was followed by a new suit this week against the New York Jets. (“I knew I definitely wanted to pursue the lawsuit and make a big change – not only for the Raiderettes, but hopefully for the entire NFL and their cheerleaders,” Oakland plaintiff “Lacy T.” told Salon in February.) The Jills’ suits come two decades after members of the squad won a first-of-its-kind legal battle to establish that they were employees with the legal right to unionize, not “independent contractors” as claimed by management. A year after their favorable National Labor Relations Board ruling, the Jills dissolved their fledgling union in order to secure a new sponsor.

Ferrari’s potential class action suit alleges that she and others “have worked an enormous amount of uncompensated time” for the team, while being required to pay hundreds of dollars for uniforms and other expenses and to buy and then attempt to sell tickets and calendars. “People don’t realize what actually it is,” Ferrari told Salon. A condensed and edited version of our conversation – on her case, sexism and the Jills’ controversial cheerleading manual – follows.

How were your rights violated here, who is responsible, and how did you decide to sue?

Once I started hearing about these other cases, especially the Oakland raiders, everything was very similar…

We had a set of rules that we had to follow. Pretty much they control everything that we do. In regard to what we sign, things like that, it just doesn’t seem right in that regard.

The alleged violations here – how did they affect you and your life?

I was a college student at the time, and I lived in Rochester over the summer. We had to pay for our uniform, [and for the cost of] certain events that required me to travel back and forth - not just from Buffalo, but from Rochester as well. So it was hard for me to hold a regular job while I was still in school.

And just the cost -- there are so many things that we have to pay for, that you don’t realize going into it, that are kind of automatically expected of you.

An attorney for Mateczun said that “While much has been said about how the Jills were compensated, there was an extensive list of benefits given to the members of the squad that included free surgical procedures, free gym memberships, free tanning memberships and free tickets and parking to all Buffalo Bills home games.” What do you make of that as a defense?

The gym membership and tanning we didn’t get [back in 2009].

Some girls could get free lasic surgery but you were carefully chosen, and as a rookie on the team I wasn’t even allowed that option.

We would get more tickets to the game and parking, but that parking pass was how we got to the game [to work].

Do you think that response suggests anything about how seriously they took the work that you were doing?

A lot of them think it’s a privilege, that we get all these things and we should be happy that we get this.

But you know, we really should be compensated for all the time and effort that we put into this team, and what we do for them.

The formation and then the destruction of the first-of-its-kind cheerleaders union at the Jills – do you see a connection between that struggle and what’s happening now?

Oh, absolutely. At that point in time when they formed a union, they obviously thought there was an issue with how they were treated. And a lot of them stood up for it. I think it’s kind of funny how now it’s all coming back.

Whether it’s the question of the right to form a union, or being paid minimum wage, do you think that gender or sexism plays a role in people’s willingness to see what you do as actual work?

Yeah, I think a lot of people…think we’re just some cheerleaders on the sidelines. And people don’t realize what actually it is, all the time that’s put into it. It’s different.

We’re women, and we definitely should be standing up for our rights. And people look at it differently.

The Jills handbook that was brought to light through the other Jills lawsuit includes instructions to “always avoid…strong opinions”; to say “excuse me” after coughing “even if you think there isn’t anyone around”; to “not complain about anything”; to “not overeat bread at a formal setting”; and on how to use tampons. Were you troubled by anything in that handbook?

Reading it, yes. When I was on [the team], we didn’t have that extensive of guidelines. We were definitely told “don’t use a loofa” and things like that.

All of those [current] guidelines and things - it just kind of baffled me. I mean, we’re all well-educated women. I think we know how to act in certain settings. But having it written down, being told “this is how you should act and this is what you should do,” just kind of goes to show the control that they had over the team.

Why do you think it is that we see so many cheerleaders from so many teams coming forward now?

I think a lot were afraid to say something, because a lot of these girls, that’s their life.

There is that one person from Oakland that stepped forward, and I think it’s given more -- especially me -- the courage to actually step up and say this isn’t right.